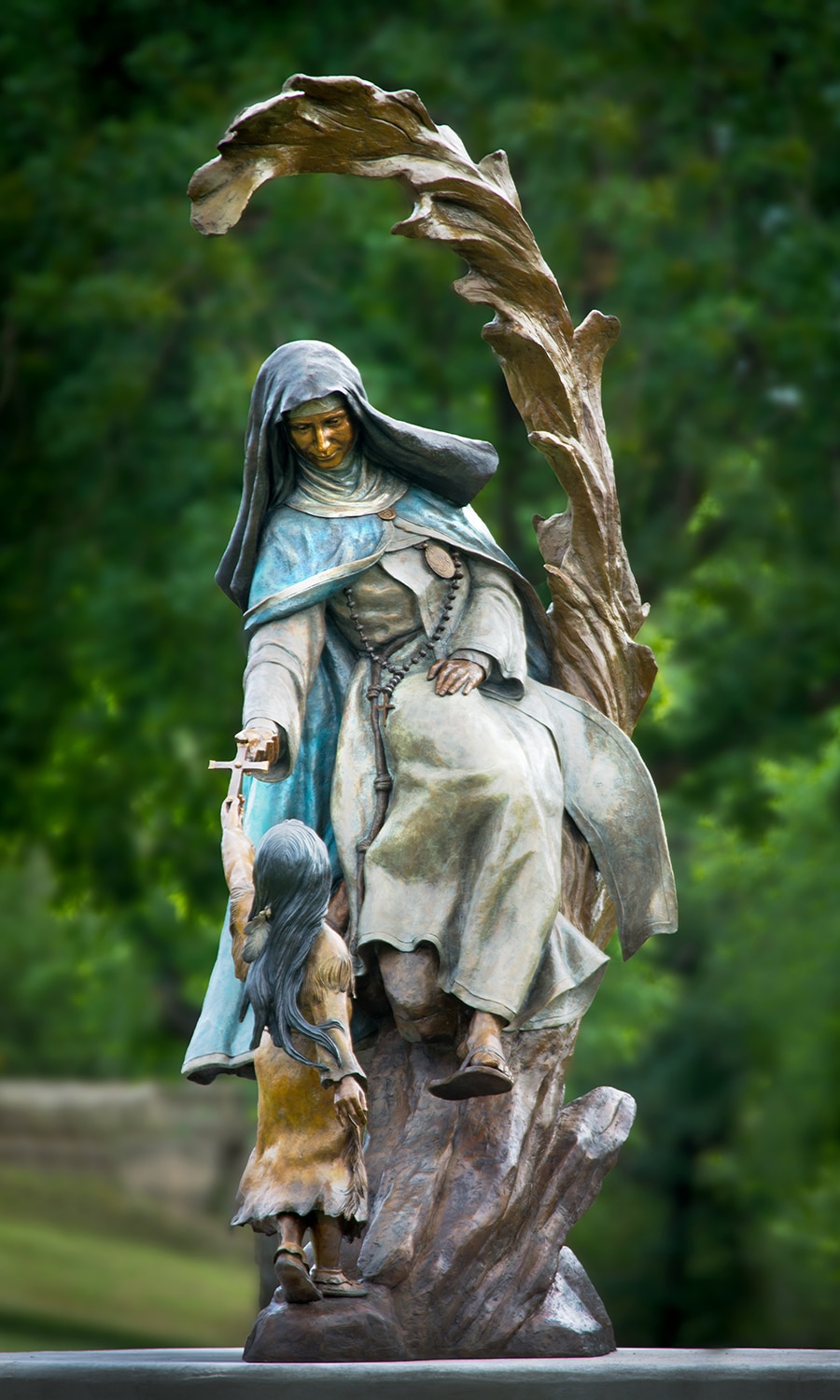 In1629, walking across the barren Southwest desert of Texas and New Mexico, approximately 12 Jumano Indian capitanes arrived at Isleta, N.M., carrying a cross covered in wildflowers. Their steps were hesitant and silent as they approached the mission. The Indians had made this long and torturous journey from their homeland six times. All six had failed.

For this trip, however, their beloved “Lady in Blue” had assured them that brown-robed Franciscan padres had arrived from Spain through Mexico, and she directed the Indians to ask the padres to come to their main camping ground and baptize their people.

The sight of the Indians carrying a Christian cross and requesting baptism astounded the Franciscans…perhaps even frightened them. Had the French “beaten” them to the Southwest? If not the French, then who’d catechized these Indians?

The Jumanos insisted they’d never seen a white man, and that their knowledge was taught to their tribe by the beautiful, young lady wearing a brilliant blue cape. When the Jumanos led the Spanish priests to one of their central camping grounds, they arrived at the Concho River confluence area at presentday San Angelo. Over 2,000 Jumanos were baptized in the first weeks.

Thus, San Angelo’s place in Texas history is secure as the site of the first missionary effort in the state — more than 45 years before El Paso, more than 80 years before San Antonio. In the early 1600s, this mysterious woman, dressed in a flowing blue cape, tended to the sick, comforted the afflicted and, most importantly, taught indigenous people about Jesus.

One missionary, Fra Alonzo de Benavides, knew of a young cloistered nun in the Spanish village of Agreda, north of Madrid. Sor María de Jesús de Agreda reportedly lapsed into deep trances while in prayer and described visits to the New World, where she taught the natives. She told visitors she made more than 500 such spiritual visits, though she in fact never left her monastery in Agreda, Spain, during her lifetime.

Upon returning to Spain, Fra Alonzo questioned Sor Maria at length and was amazed at her detailed descriptions of the lands she’d never seen in person. He was also astonished to learn that she wore a sky-blue cape when she went outdoors.

When Fra Alonzo asked Sor Maria where she learned to speak the Jumano languages, she reportedly replied, “I didn’t. I simply spoke to them — and God let us understand one another.” The appearances ceased after Fra Alonzo told Sor Maria of his contacts with the Jumanos. Sor Maria then said, “My work with my beloved Jumanos is finished.”

Sister Maria died in 1665, and her incorrupt body can still be viewed at the convent where she lived and from where she “journeyed” to the Americas.

Jumano tradition relates that as Sor Maria was leaving on her final visit, wherever her blue cape touched the ground, bluebonnets sprang up to forever grace the Texas countryside.