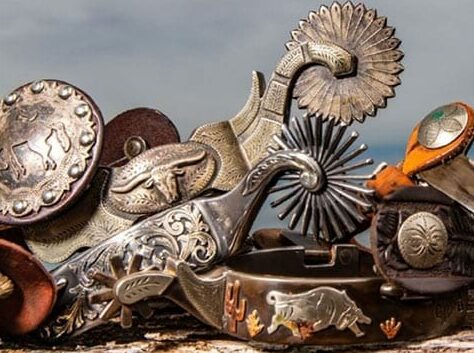 The “Texas Spurs and the Artists Who Created Them” exhibition opened at the W.K. Gordon Center in mid-June and has been so well received that the exhibition has been extended to January 30, 2022.

The Hugh Edmondson Collection of spurs and bits contains spurs made by more than 20 craftsmen over the course of 120 years. A Tarleton alumnus, Edmondson recently donated his collection to the university.

“This collection provides a basis for the study of spur making; its history, the metallurgy that is part of the process, and the art involved in the design and decorations of different styles,” said exhibit curator Mary Adams.

Visitors can learn a brief history of spurs and the vocabulary of spur components like rowels, bottle openers and gal legs. This collection of spurs showcases a variety of materials, finishes, intricate designs, sizes, and shapes. A short video takes viewers into the workshop of Wilson Capron while he engages in his creative spur making process.

Featured artists include Joseph Petmecky, J.O. Bass and three generations of the Boone family, descendants of Daniel Boone, the American frontier pioneer; Harold “Swede” Strong, an immigrant from Sweden; Marvin “Cowboy” Traylor, believed to have learned blacksmithing while serving time in a Texas penitentiary in the 1920s; and contemporary craftsmen Wilson Capron and Randy Butters.

The collection showcases a variety of materials, finishes, designs, sizes and shapes. A short demonstration video takes visitors inside Capron’s workshop. A resident of Christoval, he was influenced in his work by his father, a cowboy artist.

The collection showcases a variety of materials, finishes, designs, sizes and shapes. A short demonstration video takes visitors inside Capron’s workshop. A resident of Christoval, he was influenced in his work by his father, a cowboy artist.

For more on the spurs exhibit, contact Mary Adams at (254) 968-1886,  mkadams@tarleton.edu, or visit www.tarleton.edu/gordoncenter/spur-exhibit.html.

The W.K. Gordon Museum and Research Center for the Industrial History of Texas
65258 Interstate 20, Exit 367 in Mingus, between Abilene and Fort Worth.
Open 10 a.m.-4 p.m. Tuesday-Saturday
The Gordon Center

The W.K. Gordon Museum and Research Center for the Industrial History of Texas is a combined museum and special collections library located at the site of the Thurber ghost town. Visitors enjoy interactive exhibits that explore the birth, operations and death of the town, which was owned by the Texas and Pacific Coal Co.

The Gordon Center is a facility of Tarleton State University which is located in Stephenville and was a founding member of The Texas A&M University System.