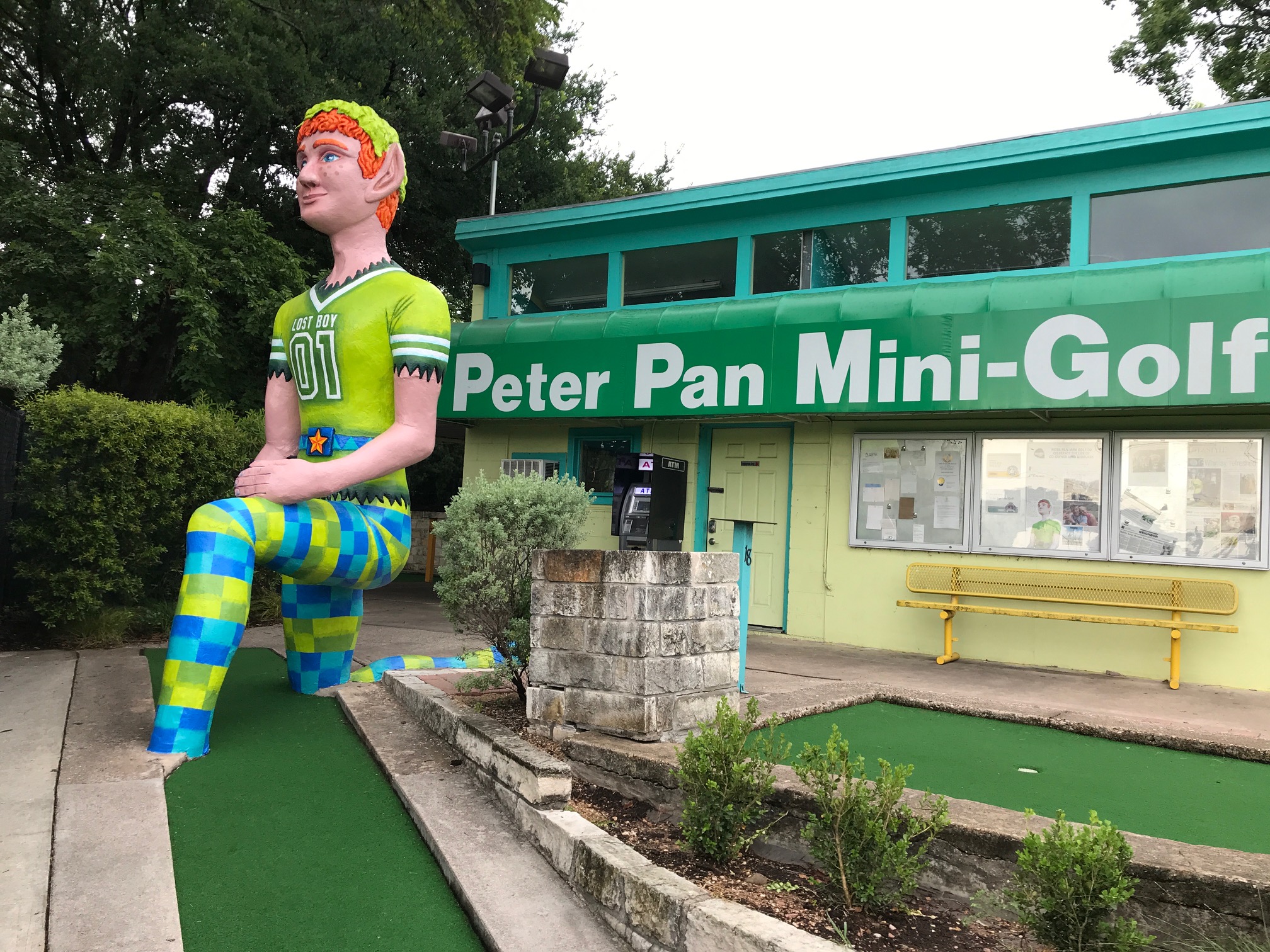 Its Sunday afternoon, and the final group arrives at the 18th hole. “quiet please!” signs are raised as the golfer steps up to putt. He raises the club back and strikes the ball, banking it off the right rail, over the moat, through the windmill, past the dragon… wait – a dragon?

Okay, this isn’t the Masters or the U.S. Open: this is miniature golf, a perennial summertime pastime all across Texas and the nation.

The origins of Putt-Putt and other forms of miniature, mini or midget golf, as it’s sometimes called, are as old as the parent game itself, dating back to the 15th century at the birthplace of golf, St. Andrews, Scotland. Here a course was laid out exclusively for putting, the only aspect of golf considered “ladylike” enough for women to play at the time.

Commercially produced mini courses began to emerge in the U.S. around 1916. The miniaturized version of the game with its compact layout and simple skill requirements became so popular that by the late 1920s there were more than 150 rooftop courses in New York City alone. The craze continued across the nation and found an enthusiastic audience in Texas as well, due in part to the big-game professional debut in 1922 of the Texas Open Golf Tournament, played in San Antonio.

Courses often feature custom themes, such as Austin’s Peter Pan Mini Golf course, an iconic landmark since 1946, with its giant Peter Pan and Texas-sized blue armadillo, and Amarillo’s Wonderland Park, whose founders, Paul and Althea Roads, installed the miniature course in 1953, two years after the park opened. These courses are short on aesthetics but long on fun.

San Antonio’s Cool Crest opened its doors in 1929, one of dozens of miniature courses that sprung up in the area, and operated almost 80 years before closing in 2007, but it wasn’t “game over” for the vintage course known for its Art Deco theme. The city designated Cool Crest a historic landmark in 2009. The Andry brothers — James, Albert, Phillip and Mitchell — purchased the property in 2012, restoring it to its former glory, reopening the two 18-hole courses in 2013.

Other historic courses dot the Texas landscape, including Abilene’s Faire Play Park, the oldest continuously operated miniature golf course in Texas. In addition to mini golf, owner Chris “Doc” England keeps an outdoor play museum where kids of all ages play classic games such as tetherball, marbles, hopscotch and four square. He even conducts classes in the art of tiedyeing.

More traditional-style courses, minus the gimmicks, attracted serious golfers and gave rise to the competitive mini-golf era of the 1950s created by Putt-Putt Golf and Games founder Don Clayton.

Few exclusively outdoor facilities remain today, many having been incorporated into amusement parks and indoor entertainment venues, but those that do provide family fun, adventure and sometimes a little history as well.