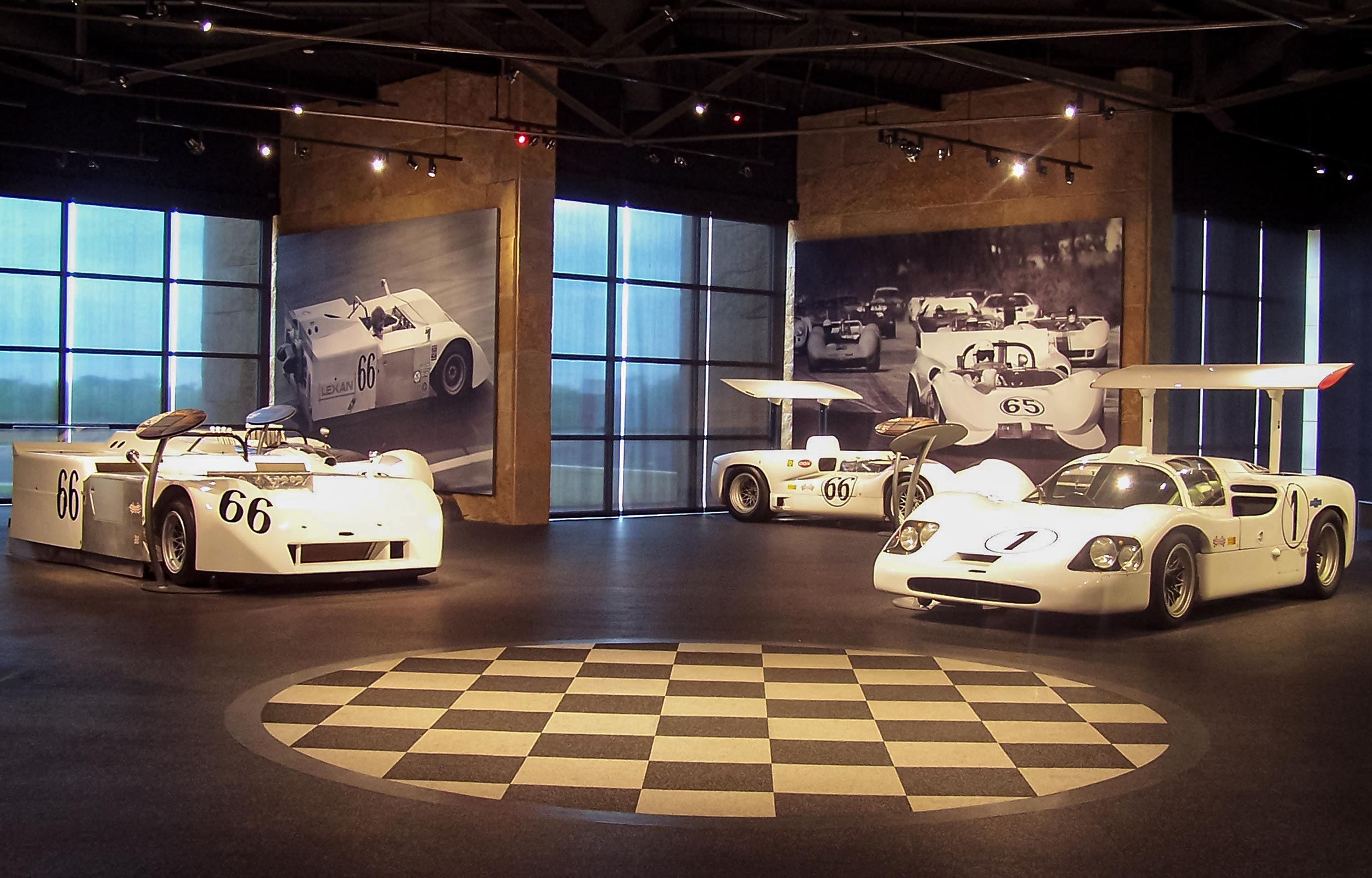 But it’s not such a stretch when you think about the pairing of the Permian Basin oilfield and the business partners whose links to the industry landed them there. Today, the legacy of Chaparral Cars, legends during the Can-Am racing era of the 1960s and ’70s, is preserved in a large wing of the Petroleum Museum, in itself worth a trip to learn about geology, drilling, petroleum products, and more.

Oklahoma-born John “Hap” Sharp, whose father had come to Midland in the oil trade and who went on to work as a drilling contractor, caught the racing bugin Texas. When petroleum heir Jim Hall, born in Abilene, Texas, in 1935 and fresh from a stint at Cal Tech in his early twenties, returned to Texas to work with Dallas-based Carroll Shelby Sport Cars, Hall and Sharp partnered to found Chaparral Cars, Inc., in Midland.

Hall and Sharpset to work designing and constructing the Chaparral 2, based on an earlier design they had commissioned from car developers Tom Barnes and Dick Troutman. The Chaparral 2 was a one-of-a-kind race car with an aerospace inspired semi-monocoque fiberglass chassis. In it, Hall won the United State Road Racing Championship in 1964, taking seven firsts, six seconds, and two third places.

In 1966 Hall and Sharp introduced the Chaparral 2E for the new Canada-American Series, a racing series created to allow innovative design and no-holds-barred speed. This new car had a high-mounted rear wing that the driver could control by a left foot pedal in the car. It was considered the car that changed racing forever.

The following year the Chaparral 2F was built and presented for the World Championship Endurance Racing. It had the fastest lap in 5 of its eight runs and won its final race.

In 1970 the Chaparral 2J, which Road & TrackMagazine in 2017 called “America’s Most Extreme Race Car,”was introduced. The 2J featured a separate engine that would drive the air from beneath the car to create a downforce. Competing Formula One drivers complained that the 2J’s high-powered fans threw everything from under the chassis into the path of cars behind it and obscured drivers’ vision. This car would not last long before it was disqualified for the way it was made.

In 1978 Chaparral won Indy with a Lola car driven by Al Unser.Disenchanted after the 2J was banned, Jim Hall bought out Hap Sharp and went on to build the last Chaparral car, the Chaparral 2K. Driven by Johnny Rutherford, 1980 it won the Indianapolis 500, the USAC and the CART National Championship. Thirty-five years later, when the firm introduced a Chevrolet Chaparral 2X VGT concept car for the Gran Turismo video game in 2014, conceptcarz.com wrote, “When racers Jim Hall and Hap Sharp founded Chaparral Cars in 1962, few could have guessed how they would shake up the conformities of the racing world—and fundamentally change it.”

Sharp took his own life in 1993 after a diagnosis of terminal cancer. Hall, who still lives in Midland and never sold any of his cars, made a deal with the Permian Basin Petroleum Museum in 2004 to retrieve them from the Chaparral garage next to his Rattlesnake Raceway and restore them for visitors to enjoy.

Periodically, weather permitting, drivers bring out one of the cars for a spin around the museum circle, and fans are welcome to attend. Those unfamiliar with the legacy of the Chaparral cars can learn more inside, in a purpose-built hall featuring the Chaparral 2, 2D, 2E, 2F, 2H, 2J, and 2K. Motorsports enthusiasts can also join the Chaparral Pit Crew Fan Club to learn more about the cars and help support the Petroleum Museum in maintaining the exhibit. “For a team that arose from oil money,” said Road & Track,“there is no more fitting home.”