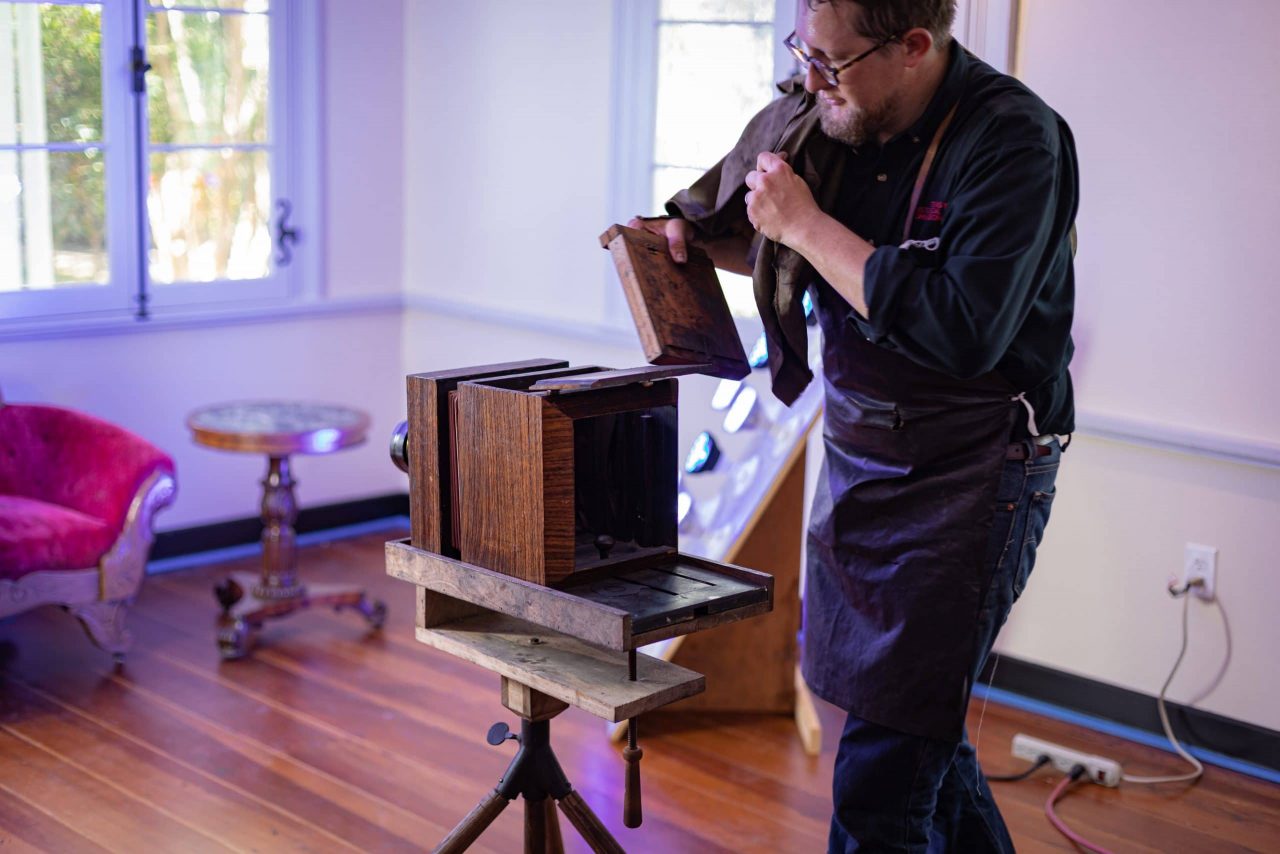 When you step onto the grounds of Fort McKavett, you are met with a sense of nostalgia. You can almost imagine soldiers marching, horses’ hooves thundering and the bustle of an 1850s Infantry fort.

State Historic Site Manager Cody Mobley is doing his best to preserve that same nostalgia. Mobley began researching period type photography and seeking someone to document the fort using the process that would have been prevalent back in the 1850s. He ended up teaching himself the process of ambrotype wet plate photography.

Documenting history has been a passion throughout his life. As a young boy growing up in Olfen, a small town in Runnels County, Mobley had one of the best influencers of all things historic. His Mamaw, Norma Jones Lee, along with his great Aunt Clara both assisted with the creation of the Wichita-Brazos Museum and Cultural Center in Benjamin.

Mobley grew up hearing stories and listing findings as they researched the lineage of their earliest Texas ancestors who arrived in 1824 from Louisiana, which included the famous early Texas Burleson family. In 1995 Mobley went on a research trip with Lee as she traveled east to archive Civil War battlefields and locations of where their family originated in Tennessee and Arkansas.

While attending Angelo State University, Mobley worked in the West Texas Collection cataloging the family collections of the region. That job led to an internship at Fort Chadbourne under the direction of Garland and Lana Richards, cataloging their extensive collection of artifacts.

After graduating from college Mobley did day work on ranches in Coleman County and some carpentry work around San Angelo, then applied for the maintenance position at Fort McKavett State Historic Site. He climbed the ladder that led to the curator/educator position and eventually became the site manager in January 2015.

As Fort McKavett’s site manager, Mobley began researching period type photography. After purchasing a lens from eBay, he read some original manuals and taught himself the process of ambrotype wet plate photography.

Unless you are a photography historian, you are probably wondering what ambrotype is and how the finished product is created. Ambrotype photography was invented in the 1850s replacing daguerreotype. Ambrotype is a photograph on glass made by a variant of wet plate and a chemical called collodion and viewed by a reflected light.

Mobley has mastered the exacting art of ambrotype and enjoys showcasing this long-forgotten type of photography. Look for Cody Mobley and his ambrotype photography at living history events in the near future.

The Process of Ambrotype Photography

This mixture is poured on the glass for the ether to evaporate. It becomes a sticky solution and the photographer will press a thumb on the corner to see if it leaves a thumb print but does not lift. If this is the case, it is ready to go into a silver vat. It is left in the silver for three minutes and becomes photo sensitive. From that moment on, everything must be done in the dark until the image is developed.

When removing the lens cap, the light goes in, the light refracts the lens, and bakes the silver hard wherever there is a light color. The photographic process is blue-light sensitive; reds show up black, some blues show up white, and some yellows show up black. The colors depend on the position on the color wheel in comparison with blue. It bakes the color hard and wherever there are shadows, the silver is not hardened. A weak acid mixture of sugar, vinegar, acidic acid, and water is used to develop it. The mixture eats away all the soft silver and only leaves the hardened silver, leaving the image.

Rinse the developer off since it is no longer light sensitive. Once this is done, the glass can be removed. The photo will need to be fixed to turn a negative into a positive and see the image. The total process takes less than 10 minutes even on a rainy day.