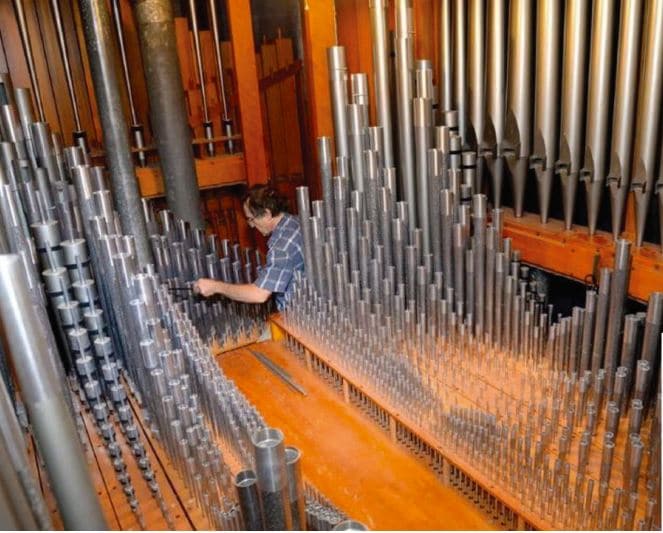 Churches big and small fill up across the state each Sunday with devout worshipers. Sunday service has been the backbone of many Texas homes for generations, and, if you’re extra lucky, the church you attend might have the music of a pipe organ billowing through the pews.

But that wasn’t always so in Texas. The introduction of the pipe organ to churches in the state didn’t come about until after the oil boom at the turn of the twentieth century, which brought masses of wealth and people to the Lone Star State.

In 1894, oil was found in Corsicana by a drilling contractor hired initially by the city to find water. The oil well produced fewer than three barrels of oil a day, but the discovery transformed the slow-paced agricultural town into a petroleum and industrial center.

Following the discovery of “black gold” in Corsicana, East Texas was transformed into the oil capital of the world — especially for one town in particular, which sparked the oil madness that put Texas on the industry’s global map.

During the early 1900s, a large petroleum reserve was discovered near the southeastern town of Beaumont, roughly an hour and a half east of Houston, that was unprecedented in its size worldwide. Also known as the “Gusher Age,” the oil boom brought workers and investors from around the country, settling their families in Beaumont and other east Texas towns such as Kilgore and Palestine with the hopes of establishing wealth by way of oil.

An influx of people and money meant contributions to spruce up local churches, suiting the expectations of the newly wealthy. The opulence and grandeur of the pipe organ was integrated into East Texas Sunday services in these once-sleepy passersby towns; even the First Presbyterian Church of Austin, for its 50th anniversary in 1900, recruited famed organist Clarence Eddy from Chicago to perform the inaugural concert on its new instrument.

The origin of the pipe organ can be traced back to the third century BC, when the instrument was first conceptualized and constructed by a Greek engineer named Ctesibuis working in Alexandria, modern-day Egypt. These instruments can be found throughout the ancient world in Greek and Hebrew cultures of the Eastern Mediterranean and were reintroduced to Western Europe after the fall of the Roman Empire in the eighth century AD. Churches in Texas, however, didn’t hear the powerful sound of the pipe organ for many centuries afterwards. Take Kilgore, for example.

The oil boom brought Roy Perry to Kilgore from Louisiana in 1932 at age 26. He was the organist and choirmaster at the First Presbyterian Church of Kilgore, a Gothic-style building perfectly designed to support the acoustics of a choir and organ. His successful career led him to an eventual relationship designing and tonally finishing pipe organs for Aeolian-Skinner, a renowned Boston company known for its impressive pipe organs.

Today, the five-day East Texas Pipe Organ Festival in Kilgore preserves the legacy of Perry and his contributions to the pipe organ industry. The festival is a mixture of concerts, special guests, presentations and exhibits. His five Aeolian-Skinner pipe organs can be experienced and enjoyed at First Presbyterian Church of Kilgore; St. Luke’s United Methodist Church in Kilgore; First Baptist Church of Longview; First Baptist Church of Nacogdoches; and St. Mark’s Episcopal Cathedral in Shreveport, La.