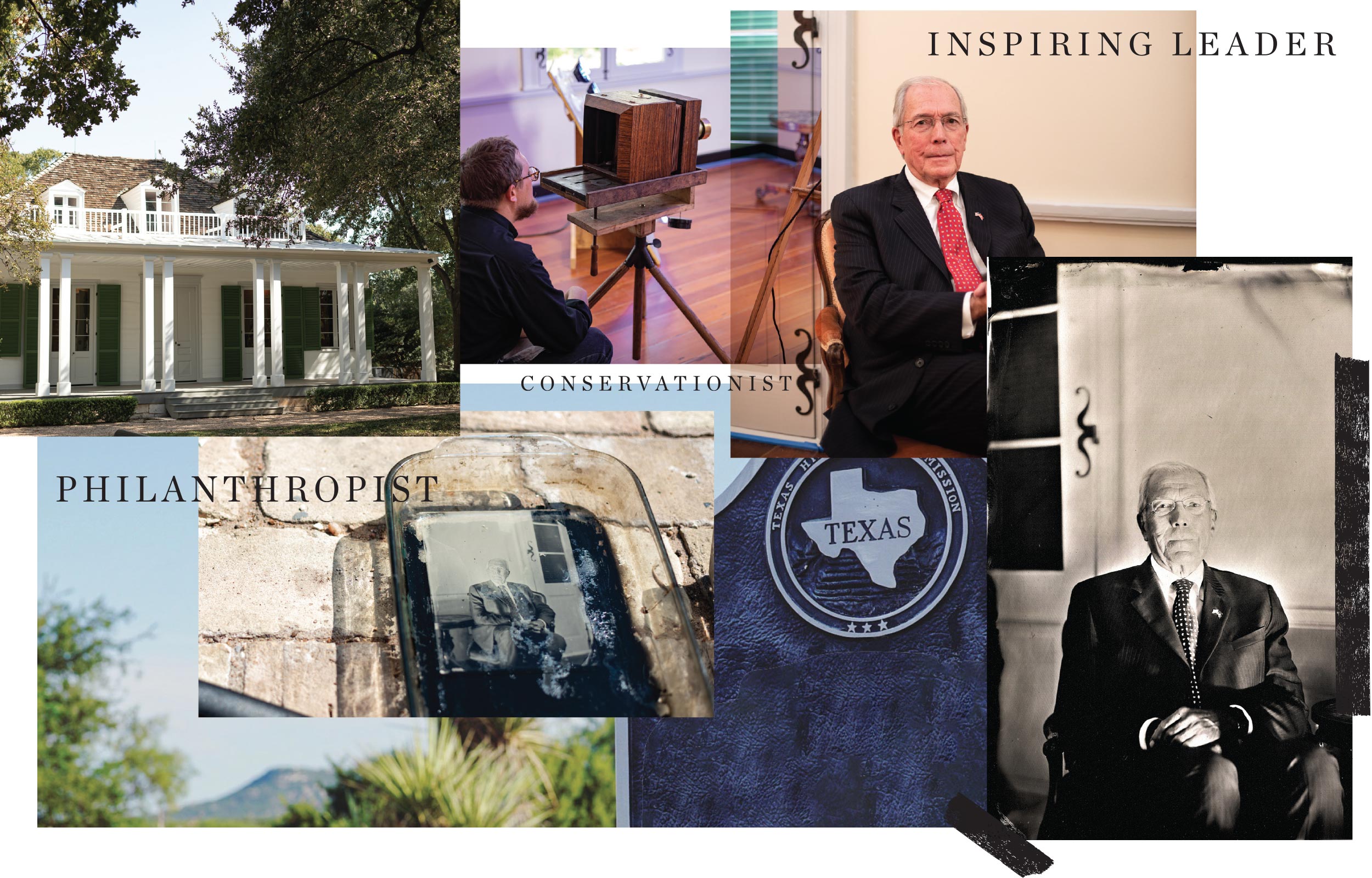 Like many transplanted Texans, it took John Nau a few years to get to the Lone Star state. He grew up in Illinois and has lived in various states including Georgia, Michigan and Missouri; however, in January of 1987 he seized an opportunity and moved from Florida to Houston, Texas. Nau has participated in civic, community, and philanthropic organizations in Houston, Texas and throughout the United States.

Mark Wolfe, executive director of the Texas Historical Commission, states, “Chairman Nau is passionate about history, particularly military history, but he has a true fascination with the story of Texas. You can tell that it inspires him. And it isn’t enough for him to be inspired, he has a sincere desire to share that inspiration with others, particularly with young Texans who can benefit from the stories our historic sites have to tell.”

Growing up in a suburb of Chicago, Illinois, John Nau’s father was a salesman who traveled all over the middle part of the country – and sometimes, Nau was able to accompany his dad. While Nau credits those trips with sparking an interest in American history, he says it was a family trip with a tour of the Perryville Civil War Battlefield in Kentucky that really started his quest to understand American history and especially the Civil War era.

During Nau’s high school years, a family trip to Virginia helped determine his choice of college. Earning a Bachelor of Arts in history, he is a 1968 graduate of the University of Virginia.

Following service in the U.S. Marine Corps, Nau was hired by the Coca Cola Company; thus began the corporate journey with moves from one state to another. Over time, he became known for bringing a new perspective to a situation and turning a company around. In 1983, Nau’s professional career had an abrupt change. As he says, “It was a bad experience with a good outcome.” As a result, he went to work for Anheuser-Busch. Within a few years, Nau had the opportunity to purchase a distributorship in Houston. Nau asserts, “It wasn’t just a business decision; it was an opportunity. It was the right thing to do. In January of ’87, I moved from Florida to Texas.”

It took time to become personally steeped in Texas culture and heritage. He states, “The first two to three years, I was immersed in turning the company around. By ’90, I took a deep breath and began to visit places I had read about. Two of them have stuck with me – obviously, the Alamo and the San Jacinto battlefield. I got to experience other places and I would say the mix of the culture, the spirit of the individual and the mythology of Texas captivated me.”

Nau also began seeking ways to make a difference. He shares, “The company was doing really well; I had a good team and good people had joined us. Now it was about how am I going to give back to the Houston region and the state of Texas.” Nau says he became aware of “the Puritan Ethic” while at the University of Virginia. “While I don’t believe I could follow the strictness or the lifestyle, the concept of good living and giving back stuck with me. Whether it’s helping people in trouble through the food bank or having the ability to help on the study of elderly brain functions, or in the case of here [serving on the Texas Historical Commission] –giving back was a way of saying thanks and extending appreciation; the Christian ethic is that you give help to those that need help.”

Since that time, John Nau has been giving back to the citizens of Texas in a variety of ways but especially with regard to Texas history, historic preservation and heritage tourism.  Now serving in his 22nd year, Nau was appointed to the Texas Historical Commission (THC) in 1993; from 1995 to 2009, he served as the Commission’s chairman. In 2015, Governor Greg Abbott re-appointed him to his current role as THC Chairman.

Describing the impact of Nau’s leadership with the THC, Wolfe says, “Some of our agency’s most impressive, award-winning programs were adopted under John Nau’s leadership. The Texas Historic Courthouse Preservation Program and the Texas Heritage Trails Program are probably at the top of that list. Also, we were the first state to create an entire program to erect markers to tell the stories of underrepresented people whose achievements had, for centuries, been swept under the carpet. Chairman Nau made that program [Undertold Markers] a reality. He worked closely with legislative leadership and with our partners at Texas Parks and Wildlife to transfer state historic sites from TPWD to the THC, allowing TPWD to focus attention on natural and recreational parks and allowing THC to take historic places to a new level of quality interpretation. Programs throughout the agency have benefited from John’s wisdom and experience.”

He is an effective and persuasive advocate for all things “Texas”, especially Texas history.

Nau concurs that the Historic Courthouse Preservation Program, the Texas Heritage Trails Program and oversight of the State Historic Sites have become the agency’s signature programs.  He maintains, “They’re not the only programs that have evolved and grown. Whether you are a university, state agency, a federal agency, or even a big private company, you have to have signature something . . . whether brands, trademarks . . . but in this case programs.”

According to the THC website: Texas has more historic courthouses than any other state—242 are still in active government use. With decades or even centuries of use, most of these structures have significantly deteriorated due to inadequate maintenance, insensitive modifications, or weather-related damage. This nationally recognized and award-winning program provides partial matching grants, and has turned around the trend of disrepair and begun restoring these treasured historic landmarks. To date, the program has funded 70 Texas courthouse restorations, another 29 courthouses have undertaken emergency or planning work with grant funds, and 25 grants were awarded to update approved preservation Master Plans.

Nau comments: I became a big fan of courthouses as a kid. Courthouses and state capitols are seats of government. Courthouses are where you register birth, register marriage, and register death. Many people will never leave their county; and in Texas, there are county ties that go back for generations. The individual that put life into this was not me but then-Governor George Bush; that became one of his legacy programs to the state. To the credit of the staff, the integrity of this program is 100%.

Nau comments: At the state level, Texas has an incredible myriad of historic threads. Credit is due especially to the site managers. They are dedicated. They know the history of the site, and they know the local people. There’s a focus on historical accuracy and storytelling. But they need resources and the ability to promote their site as part of a larger narrative. Many times there is a friends group and that support needs to be embraced.

There are several factors that determine if it is appropriate for a particular place to be designated as a state historic site. First, does a site rise to importance at the state level? Then, is there any other place within the state inventory that is telling that story? Even though the state is geographically huge, you can’t eat up all your resources telling just a couple of stories. For example, the Charles and Mary Ann Goodnight House in the Panhandle near Claude is the newest state historic site – it’s a classic prairie house and tells the story of cattleman Charles Goodnight and his wife. Look at the house that was built in the middle of nowhere; the two of them must have been a couple!

Nau shares: With a possible close second in Massachusetts or Virginia, there’s no other state that has the breadth of history of Texas. It is worth not just protecting, but also helping to communicate. I think if there was one thing over the past 20-some years that has changed, it is that the Commission has gone from having a mindset of just protecting to promoting – to reaching out and embracing the idea that we want people here. Come to the historic sites. Look at the pamphlets. The discussion on creating the Heritage Trails Program really showed me the breadth of knowledge and the real love of state among all the other commissioners at that time. That was our first organized approach in heritage tourism beyond the Alamo. There is a bigger and more noticeable economic impact from heritage tourism in middle- and small-sized towns than in the big cities – the big guys. So that also started us on the combination of preservation and promoting.

Nau shares, “There’s an old adage that ‘all politics are local’; I would marry that to ‘all history starts locally.’”

He continues, “Advocacy is converting someone’s personal interest and passion into a governmental platform – whether that is your mayor, your county commissioner, state representative or your state senator. Be fact-based. Try to deal with dollars and cents; what is the economic impact? How many people came to visit and how many spent the night in hotels or ate in local restaurants? Talk about the educational impact; what’s the number of school kids visiting? Especially kids in the grades where TX history is taught. And this cannot be just a person. There has to be a group. For example, the “friends of the courthouse.”

With regard to visiting THC operated historic sites, Nau recommends, “When you visit a state historic site, if you see areas for improvement – maybe you’ve seen something done differently somewhere else or you wish we had done something differently – make a suggestion. Where there is value and it was worth your time, let us know that as well.“

The Texas Historical Commission is composed of 15 members appointed by the governor with the advice and consent of the senate. Members serve overlapping six-year terms; they must be citizens of Texas, and together represent all geographical areas of Texas. The Commission meets quarterly.

John L. Nau, III is the Chairman and CEO of Silver Eagle Beverages, one of the largest Anheuser-Busch distributors in the United States.  More than 500 employees service a territory that includes Bexar County and extends over 12 additional counties in southwest Texas. Silver Eagle Beverages distributes a broad selection of domestic and import brands, national and local craft beers, and several non-alcohol beverages and waters.

John Nau has served in civic, community, and philanthropic organizations to include: