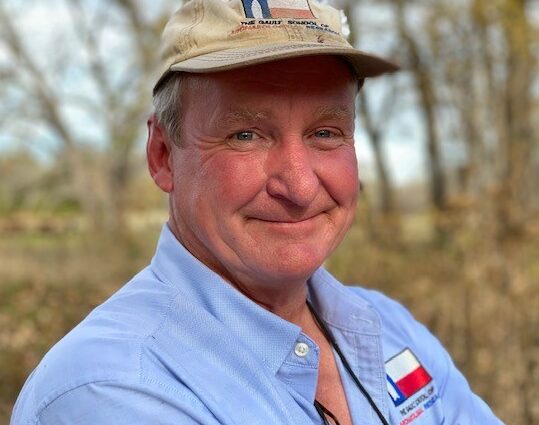 Many people spend a small fortune to spend an evening with a musical rockstar; in Central Texas, you can spend several hours rubbing shoulders with a true rockstar – archeologist Dr. Carl Wernecke.

Whether leading a tour of the Gault Site or speaking to a group of civic leaders regarding some of the earliest humans who settled in the western hemisphere, it becomes readily apparent Wernecke knows and loves what he is talking about – and he always leaves the audience wanting more. When Dr. Wernecke speaks, he weaves a delightful tale of human evolution sharing information gleaned from his three decades long career as a researcher, educator and archeologist.

Dr. Wernecke possesses impressive scholarly credentials with a wide range of experiences. His academic career began with a degree in history from Southern Methodist University followed by master’s degrees in business from Northwestern University and in anthropology from Florida Atlantic, and finally his doctorate from the University of Texas at Austin. His vast personal knowledge of archeology and architecture comes from working at sites around the world including the Middle East, Guatemala, Belize and in the United States from Wisconsin to Colorado to Florida. One could say he certainly gets around!

Over the course of his career, Wernecke has written extensively about Mayan sites, Clovis culture, excavations at the Gault Site and archeology outreach and education. Highlighting the significance of the research and information gained from the places he worked, he has presented papers at conferences not just across the country but around the world.

While his first days as a teaching assistant at Florida Atlantic University in the early nineties led to teaching at UT Austin today, his educational expertise has been shared with students of all age groups. The classes he teaches today for Senior University in Georgetown and Osher Lifelong Learning Institute at the University of Texas at Austin are just as fun and engaging as the lessons he taught for elementary students at Archeology Day events in years past as well as the high school field trips he conducts at the Gault School. Spreading the word about the findings of those who peopled this area 18,000 years ago is his passion and it shows.

When Wernecke is not serving as the Project Director for The Prehistory Research Project at the University of Texas at Austin, he works as the Executive Director of the Gault School of Archeological Research, a role he has enjoyed since 2006. And, one in which during his tenure, he has worked with more than 6,000 volunteers and engaged with the outreach programs touching more than 65,000 people. According to Wernecke, those programs have helped people better understand what archaeology is and what it can tell us.

The Gault Site experienced its first excavation on the farm owned by Henry Gault in 1929, and archeologists and anthropologists have been interested in the site ever since. The first crew working the site found several Paleoindian artifacts during their eight-week excavation, and for some time the site was a pay-to-dig operation. During the first major research excavation from 1999-2002 more than 1.4 million artifacts were found. The land had changed hands numerous times, but in 2006 Michael Collins bought the land and donated the site to the Archaeological Conservancy – a nonprofit that protects some 500 sites nationwide. The Gault School of Archeological Research (GSAR) was formed that same year.

Today the Gault School enjoys world-wide acclaim for its contributions to our understanding of how humans evolved over time, and Wernecke has been the major force in making that happen. Tours of the Gault Site are arranged through the Gault School of Archeological Research, the Bell County Museum, and the Williamson Museum.

At every opportunity, Dr. Carl Wernecke takes archeology, a deep subject with many layers, and makes it fascinating for all kinds of audiences. Wernecke recently shared, “I get asked all the time, ‘Why should we care about archaeology? Why is it important?’” He continued, “Who we were is an important part of who we are and who we will become. Archaeology helps us to better understand our past in order to help us understand where we are headed as a species.”

This rockstar truly sparkles when he speaks – reserve your spot on a Gault Site tour as soon as you can and be prepared for an entertaining and educational experience.

Gault Site Tours
Tours are conducted monthly and are available on alternate months from the Williamson and Bell County Museums. Guided tours begin at 9AM and last about 2 1/2 hours. Fee is $10 per person, children 10 and under are free. Contact Steven Rise (museum@bellcounty.texas.gov) to reserve your space. For information call (254) 933-5243.

Mickie Ross retired in 2020, after spending 12 years in her dream job at The Williamson Museum and 21 years as an elementary school teacher. She now enjoys sharing stories of Georgetown’s past while serving as President of Preservation Georgetown.