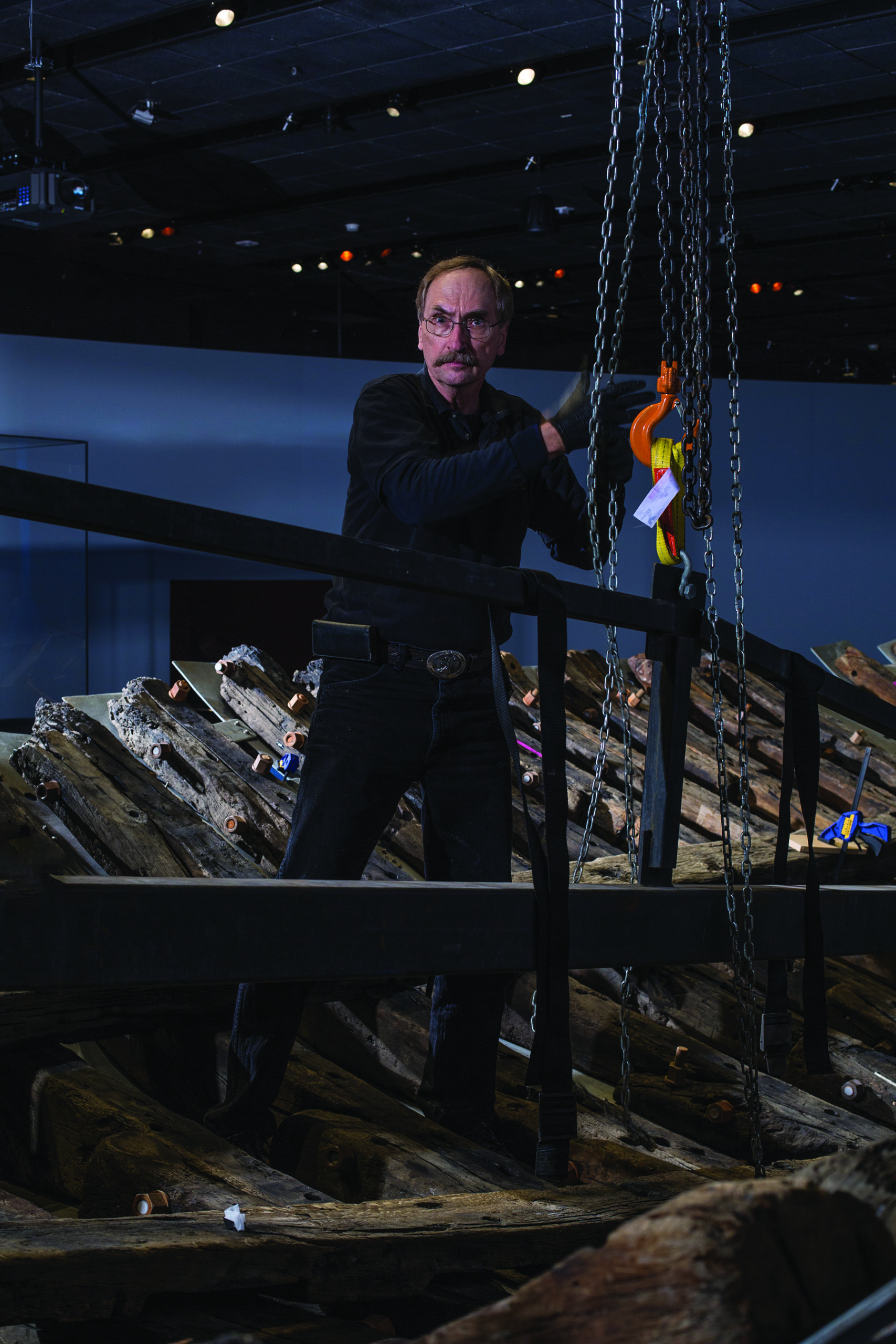 For almost a half-century, he’s crisscrossed the state as sort of a “detective,” gathering artifacts and clues, assessing the evidence and arriving at well-thought-out conclusions about matters of historical significance. His most-notable detective work involved the mid-1990s discovery and excavation of the shipwreck La Belle, a 17th-century French vessel under the control of explorer Robert Cavelier, Sieur de La Salle that sank in Matagorda Bay in 1684.

“The spark for my archaeology interest occurred when I was a young boy in the late 1950s,” he says. “I was visiting our family farm in Idaho with my grandmother, and she took me to a place where she said Native Americans had camped. I found an arrowhead and thought that it was so amazing to be touching a piece of ancient history. That incident launched a lifelong interest in archaeology and learning about people of the past.”

Born in Pasco, Wash., Dr. Bruseth spent his formative years in Slidell, La., knowing he wanted to be an archaeologist. But his parents were afraid he wouldn’t get a job in archaeology, and they would have to support him beyond college. So he attended the University of New Orleans and graduated with a degree in business management in 1974. He then moved to Dallas and Southern Methodist University to earn both his master’s and doctoral degrees – in archaeology.

While pursuing his graduate degrees, he worked at SMU in the Archaeology Research Program and eventually served as director. There he performed archaeological studies for public works projects, which were required to comply with state and federal laws to protect archaeological sites from planned development. In 1987, he moved on to direct the Review and Compliance Department at the Texas Historical Commission (THC). Ten years later, he  became the first director of THC’s newly formed Archeology Division.

Texas has more than 15,000 years of human history, yet we only have written records for 4% of that time.

After almost 25 years at THC, he retired from state employment in 2011, became an independent archaeological consultant and worked in that role for the Friends of the THC support group and the Bullock Texas State History Museum in Austin. For the Friends, he wrote books on archaeology. At the Bullock, he worked to develop the museum’s La Belle shipwreck exhibit. The reconstructed hull of the ship is a focal point in the Bullock’s central atrium.

Dr. Bruseth champions archaeology because it answers so many questions about past civilizations.

“Archaeology is the study of the past through the analysis of artifacts and other items, such as the places people lived, to learn about early cultures,” he explains. “Texas has more than 15,000 years of human history, yet we only have written records for 4% of that time. If we want to learn about the other 96% of our state’s human history, we have to rely upon archaeology to tell us about what happened.

So the artifacts and occupation sites of early cultures are like a special history book that can only be read and understood by using the methods of archaeology. Normally, this requires the excavation of an archaeological site and the recovery of artifacts and other information, which is then analyzed and interpreted to understand long-lost cultures.”

The La Belle excavation near the coastal community of Palacios proved to be a career-changing moment for Dr. Bruseth. It constituted an entirely new professional adventure into the realm of maritime archaeology, and it immersed him in the era of early European colonization of North America.

“As we recovered the hull remains of La Belle, containing over 1.8 million artifacts, we discovered that beyond the shipwreck we had unlocked an even more important part of history,” he says. “The sinking of La Belle had changed the likely course of Texas history from what very well could have been a French heritage – like that of New Orleans – to what is today our wonderful Hispanic heritage. The presence of the French explorer La Salle and his expedition ships, including La Belle, in land that Spain had claimed, alerted the Spanish king and his council to the importance of doing more than just claiming the eastern two-thirds of today’s Texas on a map. It was time to send an army of men to actually conquer and inhabit the land.”

The discovery of La Belle began one day at THC headquarters when Dr. Bruseth said it was time to make a major shipwreck discovery. He and his team sifted through information on hundreds of shipwrecks known to be lying off the Texas coast. They settled on La Belle and headed out in the summer of 1995 to locate the wreck.

“With this immensely important discovery, we knew that a full-scale excavation had to be mobilized quickly,” he says. “The problem was that we needed money – a lot of it. With the help of the THC’s Chairman John Nau, former Texas Lt. Gov. Bob Bullock and other state government leaders, we received an initial $1.75 million. This got us started, but fundraising for much more financial support became a part-time job for me in addition to directing the excavation on a daily basis. We ran a crew of 10 to 12 archaeologists, seven days a week during the excavation that took place from September 1996 through April 1997.”

The muddy waters of Matagorda Bay necessitated the building of a steel cofferdam around the wreck and the pumping of water back into the bay. This allowed excavation of the wreck as if it were an archaeological site on land. Use of  the cofferdam for an archaeological excavation marked the first time it had ever been done in the Western Hemisphere.

Successful recovery of La Belle gained international attention as well as articles in publications such as National Geographic, The New York Times and Smithsonian Magazine. It also prompted Dr. Bruseth to write  books about the adventure including From a Watery Grave, coauthored with wife Toni Turner (left) in 2005. They won two national awards for their book.

La Belle isn’t the only archeological achievement during Dr. Bruseth’s almost-50-year career. He’s grateful for the opportunity he’s had to ensure the preservation of Texas’ most important archaeological sites.

“Right now, I’m primarily focused on wrapping up projects I did in the past that require reports, books and other forms of presentation to the public,” he says. “Probably the current two biggest projects are the excavations I directed at Fort St. Louis in South Texas and the search for the lost grave site of Texas Ranger James Coryell in Central Texas.”

Fort St. Louis was the settlement that La Salle built near Victoria during his 1685-1687 attempt to build a New World colony in today’s Texas. The first European settlement in eastern Texas, it’s also the place where the first recorded European birth on Texas soil occurred.

“The James Coryell grave project was an effort to verify the existence of this long-lost burial site,” Dr. Bruseth says. “Coryell was an early Texas Ranger who was shot and scalped by Indians in 1837. He survived for a few days after his injury and was buried in Falls County. His grave location was unknown until we discovered the written narrative of a former enslaved worker at a mid-19th-century plantation. Based on that narrative, we found and excavated Coryell’s body. Extensive forensic investigation confirmed we had found Coryell, and we have produced a documentary film that is currently airing on PBS stations across the U. S.”

Dr. Bruseth still devotes much of his time to advising Texas museums as well as serving on the boards of organizations with interests in archaeology. He’s unique in that he’s a former THC staff member who now serves as a THC commissioner. After retirement from THC in 2011, he earned appointment as a THC commissioner in 2018 and won reappointment in 2021. Aside from writing archaeology books, he enjoys gardening and cooking.

He contends that Texas has it all – an amazing archaeological heritage with many more discoveries to be made. In fact, some of the oldest sites in North America are located in Texas. West Texas has multi-room pueblo-like structures. In Central Texas, there are hunter-gatherer campsites. In East Texas, Caddo burial mounds can be found. Along the Texas coast, there are traces of Native Americans who specialized in fishing, hunting and gathering plants, not to mention hundreds of shipwrecks that lie offshore. And along the Rio Grande-Pecos Canyonlands, some of the finest prehistoric rock art found anywhere in the world is present on dozens of rock art panels.

“My entire career has given me a great sense of pride and professional fulfillment,” Dr. Bruseth says. “I have investigated dozens of important archaeological sites and informed millions of people about our state’s rich archaeological heritage. And all this time, I’ve had a job that I loved.”

Thankfully, for the good of Texas, he eschewed a career in business management to become a “detective” and ultimately an archaeologist extraordinaire.

For More Information About the La Belle, Explore the Odyssey Trail