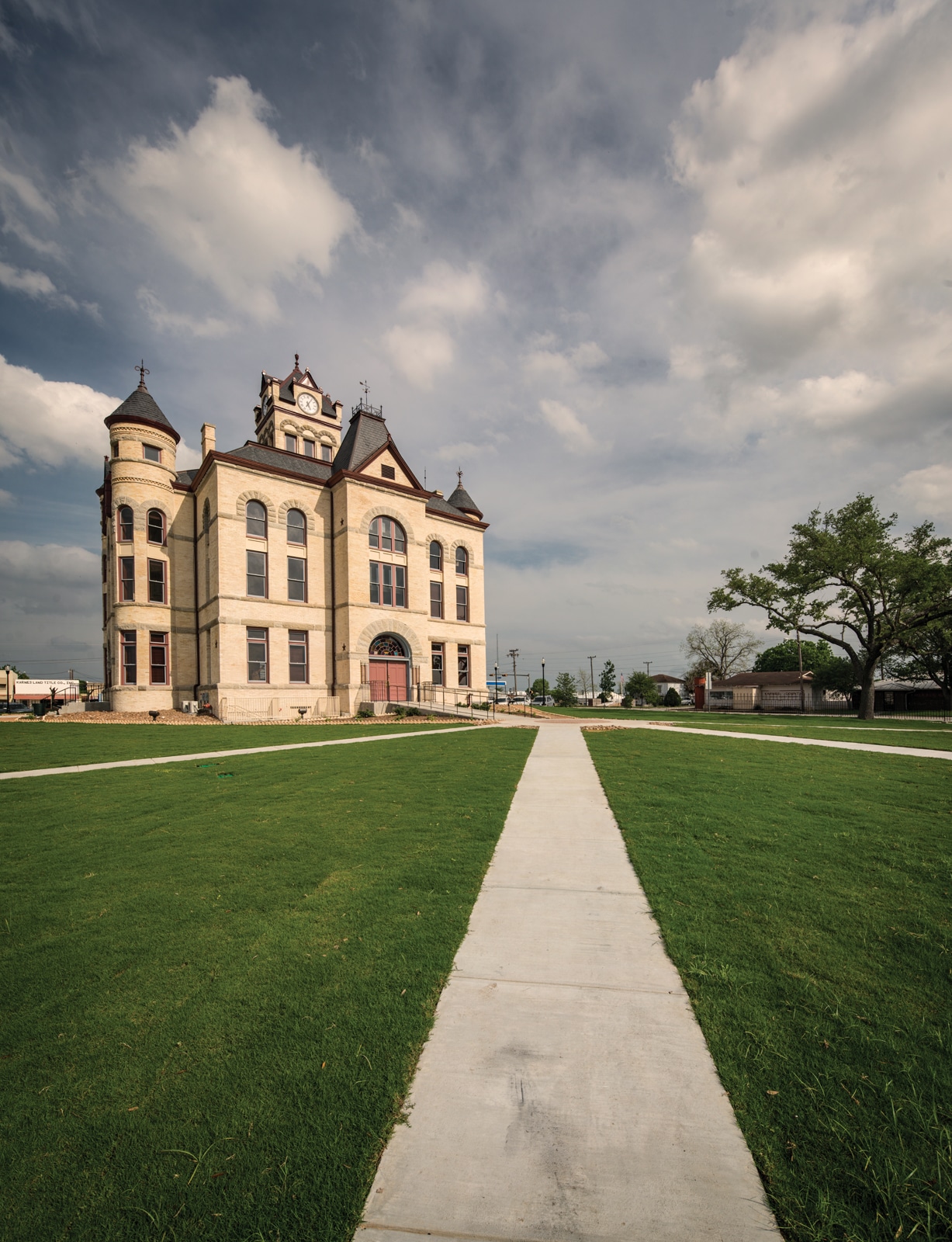 No Wrong Way to Enjoy Feldman’s

On an unusually brisk April afternoon in 2018, county residents packed the courthouse square in Karnes City, located about an hour’s drive southeast of San Antonio. They were celebrating one of the most dramatic transformations in the twenty-year history of the Texas Historical Commission’s (THC) Texas Historic Courthouse Preservation Program (THCPP).

The 1894 Romanesque Revival courthouse is the third to serve Karnes County. The first was a log cabin erected in 1854 in the original county seat of Helena, an important stagecoach stop between San Antonio and Goliad. It was destroyed by a fire in 1865, and a new stone courthouse, designed by architect John Jacob Riley, was built in 1873 in Helena, where it still stands today.

By the 1880s, the San Antonio and Aransas Pass Railway was planning a route from San Antonio to the Gulf Coast, but Helena residents didn’t raise enough money or donate sufficient land for the project. Instead, local rancher William Green Butler offered property west of Helena through what is now Karnes City. The railroad subsequently bypassed Helena and designed a route through Karnes City; the populated and prosperous railroad town became the new county seat in 1893.

In 1920, the county renovated the courthouse to make it more modern
for its time. Alterations included two additions on the west side, removing the original clock tower and conical roofs of the corner turrets, applying stucco over the brick, and blocking off the south entrance.

Nearly ninety years later, county officials and preservationists decided to return the now-aging courthouse to its original 1894 appearance. Preservationists and members of the community first partnered with the THC in 2004, when they applied for and received a $100,000 courthouse planning grant from the THCPP. Over the next decade, an annex replaced nonfunctional additions, then Karnes County was awarded a final $3.9 million grant to fully restore the building to its 1894 architectural magnificence.

The fourteen-year project is considered one of the most challenging in the courthouse program’s history. Because the dramatic 1920 makeover also left the courthouse with severe foundation issues, restoring the structural integrity of the building was prioritized, along with the initial architectural design.

Today, the original Victorian beauty of the Karnes County Courthouse has been reclaimed, including the four brick chimneys, slate tile roof, historic landscaping, and iconic clock tower. Inside, the original wood flooring has been salvaged and reinstalled in the main courtroom, along with reconstructions of the historic courtroom furniture.

The restored courthouse—now a Recorded Texas Historic Landmark, a State Antiquities Landmark, and listed in the National Register of Historic Places—sits atop a hill where it can be seen from miles away in any direction, serving as a beacon of this small Texas community’s tenacity and dedication.

At the rededication event, Karnes County Attorney Jennifer Ebrom Dillingham said, “It being fully restored and fully functional will bring in other opportunities for law offices to come in, along with restaurants, small businesses, and things that operate around a courthouse square.”