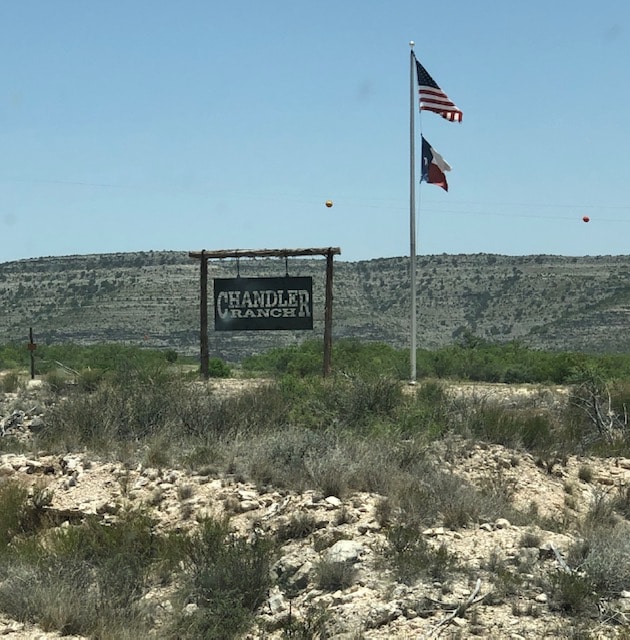 Just a little over a two-hour drive south from Midland through the mountains and canyons of the Pecos Trail Region, you find a jewel on the Pecos River — the Chandler Ranch.

Established in 1912 as a cattle ranch, the Chandler Ranch later added farming and in the 1950s it became a guest ranch for visitors wanting to enjoy the beauty of West Texas. A nine-hole golf course was built in the late ’60s, and the ranch continued to be a getaway until the early ’80s.

For nearly 30 years, nature was allowed to take over the pastures, farming operations and golf course. However, the ranch was renovated and reopened in 2015.  Now guests are able to enjoy swimming in a spring-fed pool, sitting in the “redneck spa,” kayaking the Pecos River or hiking around the ranch. For lodging, visitors have a choice of two bunkhouses, the Café Cabin or the Casstevens Cabin. Entirely refurbished, the rooms have been modernized with queen and twin sized beds along with spacious bathrooms. It’s a wonderful place to relax and enjoy the great outdoors. It’s so peaceful and beautiful, you won’t want to leave.

For my 50th birthday I visited the Chandler Ranch with a girlfriend. We ended up being the only guests for the weekend. After we settled into our cabin, Manager Richard Jasso drove us around the ranch, showing us its amazing history — 300-year-old oak trees, a concrete dancing pad and the crystal-clear Independence Creek. After about an hour learning all the fun stories about the history and people of the ranch, we took time to enjoy the spring-fed swimming pool.

Richard pampered us with his amazing homemade food. (Reservations include meals, and Richard can accommodate dietary restrictions and preferences – low carb, keto, etc.) That night we were treated to hand-breaded steak fingers with gravy. Dessert was the famous Texas Chocolate Sheet Cake. A peaceful night of sleep in the homey cabin, and we were ready for a day of enjoying the ranch beginning with a breakfast of biscuits and gravy, fried eggs and bacon. Yum.

Richard took us to kayak the Pecos River (left). It was my first time to kayak so we chose the tandem kayak so my friend could help me maneuver the river. It took us about an hour-and-a-half to reach the stopping point where Richard was waiting to pick us up. Our next stop was the “redneck spa” on Independence Creek. The “spa” consists of three pools of different depths where you can sit in the creek and take in the beauty around you. It was so peaceful. Dinner that night was barbeque and the most-delicious chocolate cheesecake. Afterwards we sat outside listening to the nighttime creatures and seeing the fireflies (something I hadn’t seen in probably 30 years) and watching lightning in the distance. It was the perfect end to our weekend.

We had such a good time we told our families and friends, “We have to go back and you have to go with us.”

After another month of not traveling or seeing our friends and coworkers, we decided we needed to take a trip. So we made reservations at Chandler Ranch and brought two newbies with us.

A friend from Lubbock rode with me, while the other two drove in from Ballinger. As always, it was a beautiful drive through the Pecos Trail Region. Who knew we had mountains and canyons? And, of course, you can’t forget the “roller coaster hill” south of Sheffield on State Highway 349. Everyone has to raise their arms and scream.

After lunch, our host Richard took us out in a four-wheeler to show the newbies the ranch. We saw the old house, the metates, the old oak trees, the dance floor, Independence Creek, the Pecos River and much more.

Floating in the pool catching up with my friends, we enjoyed a lazy afternoon with the ranch to ourselves.  Richard grilled steaks and made another scrumptious dinner for us to enjoy. After sunset, we sat around the fire pit and enjoyed another relaxing evening.

An afternoon of kayaking down the Pecos River was on the itinerary along with sitting in the redneck spa. I could get used to having days at the office like this.

When we got back to the cabins, another group of guests had arrived. Introductions were made and we became better acquainted.

One of the guests was Lynn Bromley, the daughter of Bill Casstevens, who has a cabin named after him at the ranch. When the ranch flooded in the ’50s, Bill, an Odessa furniture store owner, offered to help Joe Chandler furnish his cabins.  They became lifelong friends. Lynn told us stories of coming to the ranch as a girl. Her brother was one of the first to play on the golf course that was once there. Each hole was named after a different guest or family member. She remembered there being six cabins on the front row and three cabins behind. They also had tennis courts. Back in the day you had a membership for your cabin. Her dad paid $100 a year for his cabin. You could also pay to rent a space at Shady Oaks or camp by the river.

We enjoyed another of Richard’s delicious meals, stayed outside and enjoyed our last night before going back to the “real” world.

Reluctant to leave the next morning, we had our last breakfast at the ranch, did some work, played a couple games of ping pong, and finally headed home in different directions. We decided we would be back and will definitely plan to have one of our business meetings here next year.

The next morning, there was some office work to do before we could enjoy the rest of our stay at the ranch. Laptops were pulled out and put to use.

It was great to share this hideaway with some of my trail peeps. I hope to bring more friends out to the ranch so they can enjoy it as much as we did – and invite you to check it out!