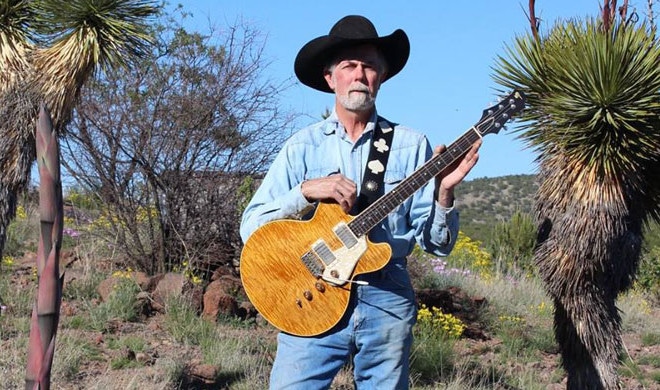 As long as there have been guitars and other stringed instruments, there’s been a need for luthiers — guitar makers.

Meet Michael Stevens, from Alpine, who’s famous for his ingenuity in creating guitars, basses and mandolins. His creations are located all around the world and rest in hands belonging to Eric Clapton, Eric Johnson, Junior Brown (the “guit-steel”) and dozens, if not hundreds, of musicians and collectors.

The guitars we see today are basic renditions of a six-string version with a flat neck, a rounded sound chamber and a head with six tuners. Spain’s Antonio Torres Jurado is credited with what would become the standard design of the “classical guitar,” which he developed in the 19th century.

The acoustic instruments Stevens produces today, like mandolins, have similar components of the Jurado guitar. But here’s the twist: Stevens’ guitars are electric. In fact, the electric guitars pioneered by Les Paul and Leo Fender comprise the lion’s share of his catalog. In an August appearance on The Tonight Show Starring Jimmy Fallon, Luke Cutchen, from the group Midland, played one of Stevens’ designs, a 30th anniversary Esquire guitar.

At the start, Stevens just enjoyed playing music. “I was in Berkeley [California] during the ‘Summer of Love,’ 1967. I began working on other artists’ instruments because that’s what I could do to sustain a livelihood.”

Stevens’ passion for Texas, guitar making and the Texas Cowboy Poetry Gathering (the largest gathering of cowboy poets in Texas) is surpassed only by his love for his wife, Alice, who passed in 2016. “It was Alice who took me to Berkeley,” he recalls, “and it was Alice who eventually brought me to Texas. I followed her everywhere she went.”

Turns out Alice was dating a man, Larry Jameson, who had a guitar repair shop in the Tenderloin District of San Francisco. Although Stevens didn’t land Alice back then, he did get a job that led to a lifelong friendship with Jameson, whom he credits with nurturing his skill and passion for guitars. “Larry loved cutaway guitars and taught me what a guitar really was,” Stevens says. “And I taught him how to work faster with power tools and jigs. We were a perfect team.”

It wasn’t long after leaving Berkeley that Stevens wound up in Austin and set up shop on 12th Street. He’d cemented his reputation as a technician and craftsman, and his notoriety led the two guitar juggernauts of the day, Fender and Gibson, to seek out his talents.

Stevens was educated at Ohio State, but that was just in the fundamentals. If you read between the lines, you realize his skills are intuitive and his understanding of the science necessary to complete his creations is continuous and otherworldly. Like a sculptor of the highest order, he sees a block of wood as infinite in its possibilities, yet his discipline in crafting instruments turns the wood into a tangible, functional work of musical wonderment.

Ultimately, he opened and created Fender Custom Shop, where he was charged with tooling, refitting and overhauling guitars for Fender’s sponsored talent. He never stopped playing, but it occurred to him that he was making a good living doing what he already loved.

After years apart and marriages in between, Stevens’ love for Alice would be requited, finally, and they settled in Alpine. It was there they both went into business. He opened a guitar shop, and she had a plant nursery. As vibrant, engaged residents and civic volunteers, the couple fit easily into the laid-back culture that is Far West Texas. Together, they flourished. In addition to her work at the nursery, Alice was a professional artist and photographer who loved horses. “She was good at everything!” Stevens says.

Stevens still resides in the home he and Alice built in Alpine. His shop, where he stays busy building guitars with rustic designs suited for the juniper and pine found in the rolling foothills of northern Brewster County, is an eclectic mix of tin, steel and space-age fabric. When he’s asked about why the popularity for his work continues, Stevens offers a simple response: “People want handmade guitars.”