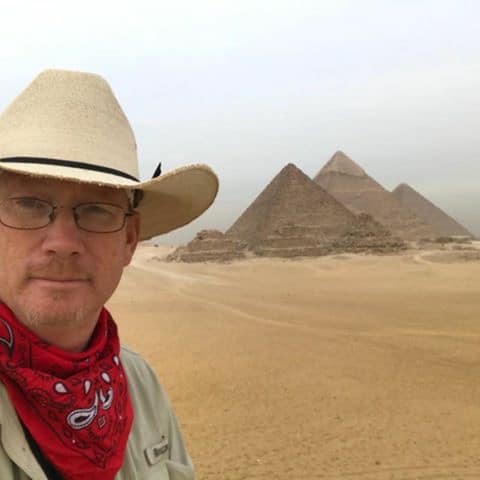 A Slice of Smoked Heaven

Doug Baum is standing at the entrance to Petra, Jordan, the first-century capital of the Nabataeans, now a UNESCO World Heritage Site, getting miked up by a photographer, film producer and film editor, whose latest movie was nominated for Best Foreign Film at the 88th Academy Awards.

So, what’s a farmer from Valley Mills, Texas, doing in Jordan, and why does it spark the imagination of an international filmmaker?

Baum was born in Big Spring to a mother who taught piano lessons and a father who managed the local radio station. Steeped in music from the womb, Baum wrote songs and learned to play several instruments, including piano, guitar and his first love, drums. He quit football in the eighth grade after breaking an arm during practice, for fear he wouldn’t be able to play the drums on MTV, which would be his stated ambition at his graduation from high school in Colorado City.

Baum moved to Nashville and got a gig playing drums for singer Trace Adkins, which he did for five years. When not recording or on the road, he worked as a zookeeper at the Nashville Zoo, where he trained the camels, Bill and Ted. Inspiration arrived in the form of a Christmas gift, a book about the U.S. Army’s use of camels to pack supplies on three major expeditions in Texas and to points westward from 1856 to 1866. Baum bought Bill and Ted from the zoo and returned to Texas in 1998 to “tell the quirky story of the U.S. Army Camel Experiment.” He settled with his young family in Valley Mills, a small town northwest of Waco, and the Texas Camel Corps was born.

In 2018, the Baum family is celebrating 20 years of education, live nativities and trekking in Texas and beyond. Baum travels thousands of miles with his herd each year to provide history and science programs for Texas schoolchildren. He and his camels — now averaging about 10 — participate in living history programs and reenactments at Texas state historic sites, national parks and museums, as well as sites outside Texas, from the National Mall in Washington, D.C., to El Morro National Monument in New Mexico.

Have Camels, Will Travel

Baum’s camels have starred in television programs and commercials, as well as feature films such as Martin Sheen’s A Texas Funeral. Each year between Thanksgiving and Christmas, it’s all hands on deck as the Baum family fans out across the state to provide animals for more than 30 live nativities. Twice each year, Baum offers treks at a private ranch in the mountains of Jeff Davis County, the same area where camels first trekked through Texas on the Beale Expedition in 1857. Additional treks will be offered this year in celebration of the milestone anniversary.

Baum and his partners offer an annual three-day camel clinic in Texas during which camel owners, and those considering acquiring camels, come to learn training techniques and veterinary care. Baum also travels across the country, from Washington State to New York, for private training sessions. He’s presented varied programs and self-produced short documentaries at international camel conferences in London, Kazakhstan and China.

In 2001, Baum wanted to learn more about camels, so he traveled to Egypt to spend a month with the Bedouin of South Sinai. There he entered a mentorship that blossomed into friendship. He’s returned each year to lead a camel trek across South Sinai and now offers guided tours to Egypt, Jordan, Morocco and India. For Baum, these trips are about commonalities, as he forms close, personal ties in each country. “They’re truly like family,” Baum says. “I’ve seen the kids grow up, get married and have kids of their own.” And he’s been educated, too. “I’ve discovered how alike people are the world over,” he explains. “In Texas we invite you in and offer you iced tea. In the Middle East the only difference is the tea is hot.”