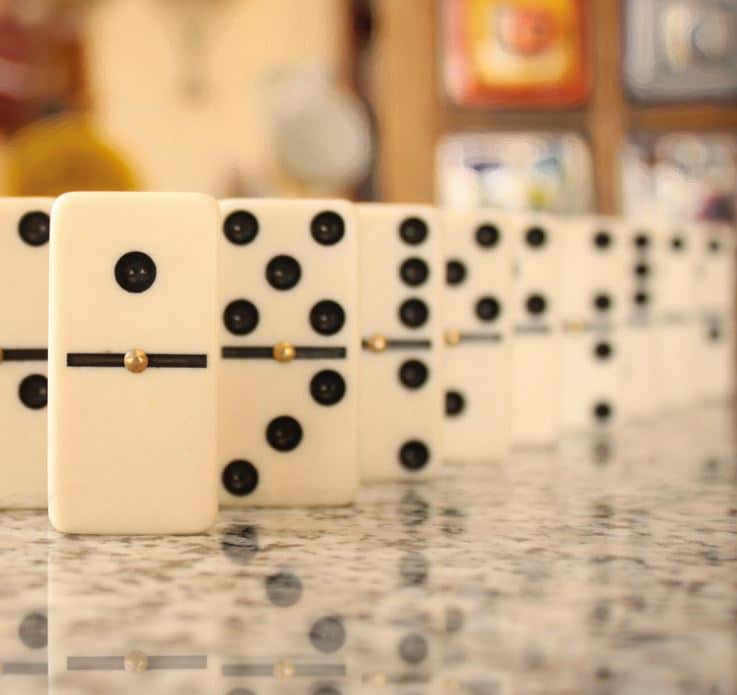 Requiring skill and patience, 42 is a domino game similar in strategy to the card game bridge, though not as complicated. 42 gets its name from the total of points to be won in each hand. It requires four players, a set of dominoes, a pencil and score pad. The game became a national pastime of sorts for Texans — anytime a group gathered, there was usually at least one game of 42.

The year was 1887, and in Trapps Spring (now Garner), about 45 miles west of Fort Worth, Baptists were the law and card playing the devil’s work. Two young boys, 12-year-old William Thomas and 14-year-old Walter Earl, were typical young kids who liked to play cards, and one spring day they were caught playing a card game in the hayloft by one of their parents. The other parents were notified, the cards were burned, and the boys got spankings.

Since dominoes weren’t sinful by Baptist law, the pair set out to invent a game of cards but with dominoes. For about four months, William and Walter played and made up rules for their new game. And thus 42 was born. The boys introduced the game to their families, who shared it with their small community, and it took off. Everyone seemed to be playing 42. After the start of World War II, Texas military men taught it to their fellow fighting men. 42 took over as the game to play in domino halls and soon became the “national game.” In 2011, 42 was designated as the official domino game of Texas.

The game is still popular, mainly in Texas. Halletsville hosts an annual state championship on the first Saturday in March, and the Texas Senior Games crowns 42 champions each year. People of all ages play the game in homes, churches and clubs. “I learned to play as a kid,” native Texan Debbie Kelly says. “I watched my parents and grandparents play as I was growing up. Both my maternal and paternal grandparents played, as well as numerous uncles, aunts and cousins. As a kid, being asked to play with the older cousins was as exciting as being picked first in school to be on a team. There were lots of laughs, a few arguments, some winning and losing but always a good time making memories that even today transport me back to those days. To me, 42 is family.”

To play the game, players split into teams of two, with partners seated across from each other. After the dominoes are shuffled facedown, players draw seven tiles each to make up their hand. (Whoever shuffles picks last.) The objective is to be the first team to score 250 points by bidding and winning tricks or by setting your opponent.

If that all sounds complicated, plenty of online videos and websites are available to learn the game or improve your performance.