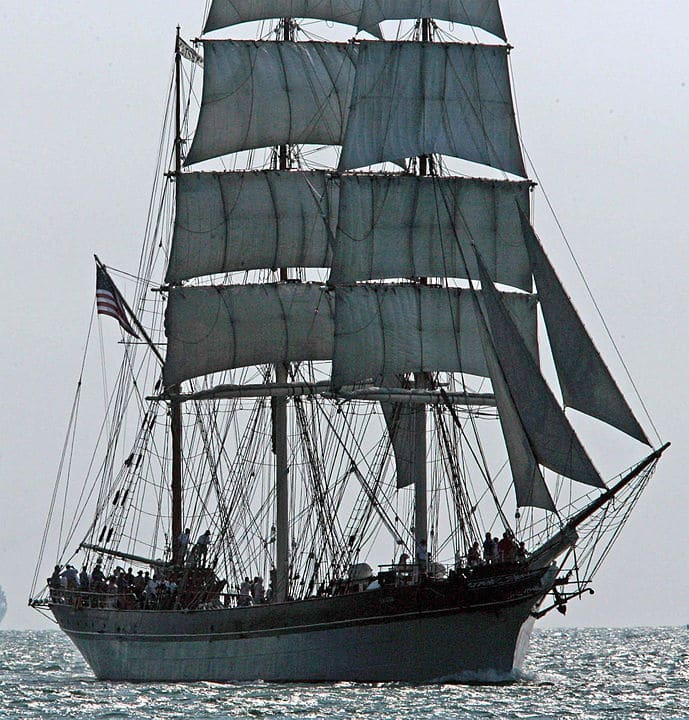 In 2005, Gov. Rick Perry designated Elissa the official Tall Ship of Texas. She was also registered as a National Historic Landmark in 1990. In fact, the Elissa became the first item outside the United States to be placed on the National Register of Historic Places, in the summer of 1978.

Elissa is more than a treasured artifact of living history; she’s a fully functional vessel starting her 142nd year of sailing annually in the Gulf of Mexico. Elissa reflects the dedication of the Galveston Historical Foundation (GHF) to bring history alive, combined with hundreds of dedicated volunteers who work tirelessly to maintain and train each year to sail her, led by Mark Scibinico, port captain in charge of the continued care and repair of the traditional vessels at the Texas Seaport Museum.

Built in 1877, Elissa is a three-mast, iron-hull barque sailing ship constructed in Aberdeen, Scotland, by Alexander Hall. The 205-foot cargo ship is actually a much smaller vessel for the era but built to compete with steam. “Steam had the advantage in shipping of being able to claim, ‘I will be there on Tuesday,’” Scibinico explains, “while Elissa had the disadvantage of being able to say only ‘I will be there, sometime.’”

Peter Throckmorton, a pioneer under- water archaeologist, approached Peter and David Brink of the GHF who were considering a replica vessel for tourism to complement the Strand Historic District. “They wanted to connect the water side of Galveston — the cargo, the immigration, all the pieces of history critical to an island like Galveston, which was second in immigration only to New York,” Scibinico says. “The ship would tie in the land-side assets with the maritime assets of the Galveston Historical Foundation. ‘You have a lifetime to build a replica,’ Throckmorton argued. ‘Why not save a real sailing ship while you have the chance?’”

The Elissa had two major restorations, the first in the 1970s and the second in 2012 after damage related to Hurricane Ike was discovered. In the 1970s, a team went to Greece and spent over $1 million just to ensure the hull was sound. Elissa was then towed to Galveston to foster renewed interest and funding for the rest of the $4.5 million restoration. In July 2011, inspections revealed a corroded hull resulting from Hurricane Ike. The Texas Seaport Museum raised the $3 million that paid for the hull replacement and other maintenance projects.

In a salt-water environment, iron hulls and wooden rigging require immense main- tenance undertaken by dedicated volunteers. “We see roughly 30,000 volunteer hours per year, equating to about $1 million in labor,” Scibinico says. “Folks put in all that work to participate in the sail training program, so they work as the crew when we get the ship underway.”

In a salt-water environment, iron hulls and wooden rigging require immense main- tenance undertaken by dedicated volunteers. “We see roughly 30,000 volunteer hours per year, equating to about $1 million in labor,” Scibinico says. “Folks put in all that work to participate in the sail training program, so they work as the crew when we get the ship underway.”

Since Elissa is a sailing school vessel certified by the U.S. Coast Guard, visitors can now purchase a ticket to serve as a sailing trainee. A ticket provides a six-hour sail on the Gulf of Mexico — lunch included — learning traditional sailing skills. Enthusiasts can also participate as a sailing school student through the free program that spans 20 Saturdays over seven months. The GHF recently held its largest sail-training session, with 193 volunteers in attendance.

The Elissa was chosen specifically because of her port of call to Galveston twice in her lifetime, once in 1883 and again in 1886. Elissa brought in a load of bananas and picked up a load of cotton in 1883. “It’s so very cool to stand on the hull of the vessel in 2019,” Scibinico says, “knowing you’re standing in the exact same artifact that was here in 1883.”