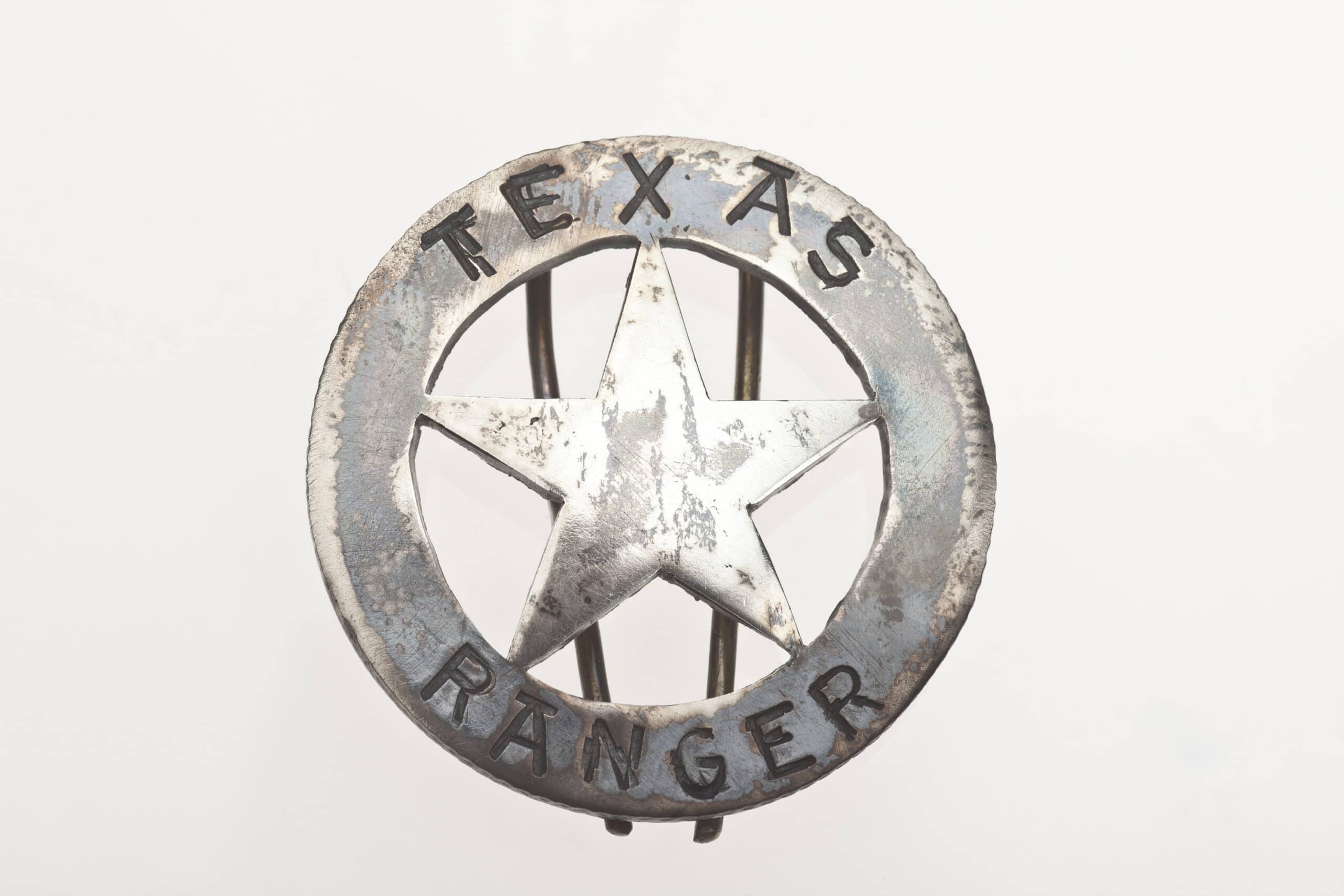 When is a Cinco Peso coin not a coin? When it’s a Texas Ranger badge.

A badge is something we recognize. It’s an emblem that identifies a person and frequently their position and their training. Police, sheriffs and deputy sheriffs, firemen and women, emergency medical technicians, the Secret Service, the FBI and a whole slew of government offices rely on badges for identification. Even utilities and private companies have issued ID badges to their employees so we have a high comfort level when we open our front door.

But in this world, and certainly our state of Texas, some badges just top all others. That is the case with a Texas Ranger badge. Before Walker, Texas Ranger started coming into our homes with a badge as big as our television screen, we have known about this elite law enforcement group.  Known for toughness and fairness, Texas Rangers protected the earliest settlers of Texas (maybe numbering in the hundreds) and they continue to protect over 29 million of the 21st century residents of Texas. They are a point of pride in the state of Texas.

Over all the years, some outlaws stayed on the run, but many more stopped in their tracks after seeing the badge, knowing that the Texas Rangers were on their trail.

Like a Texas Ranger, the badge they carry or wear is very unique. In fact, when Stephen F. Austin formed the Rangers in 1823 to protect the Old Three Hundred, they did not have a badge.  The first Texas Rangers may have had a written letter of commission, which did carry a lot of weight. But it’s hard to picture a hardened cattle rustler paying much attention to a piece of paper. Heck, they may not have been able to read it.

So, during the early years Texas Rangers relied on a good horse and a reliable gun.  “The saying goes, ‘God created men, Colonel Colt made them equal,’” historian Michael Grauer, McCasland Chair of Cowboy Culture at the National Cowboy and Western Heritage Museum in Oklahoma City, says.

He suggests the idea of a frontier militia dates to 1713 with the development of the Compania Volante. The Compania’s goal was to protect the frontier of New Spain, just as the Texas Rangers’ goal became protection along Texas’ frontier. The Compania Volante also influenced the formation of Ranger organizations in Arizona, California, Colorado and New Mexico.

The idea of a badge is simple and it dates to the Middle Ages, according to Byron Johnson, Director of the Texas Ranger Hall of Fame and Museum in Waco. Large armies needed a way to identify friend or foe. A crest on a tunic or shield was a way to make that identification during the heat of hand-to-hand combat. Five hundred years later, on the border of Austin’s colony and Mexico, and then along the frontier of Texas, identification was also important. And badges slowly came into use.

Why the Cinco Peso coin? Probably two reasons. First, it has a high silver content, making it both valuable and very workable. Second, and for a long time more important, it wasn’t a U.S. or Texas coin so de-facing it was not against the law.

The first badge may have been linked to Ranger Leander McNelly, a member of the Special Force of the Texas Rangers established in 1875 that was charged with ending cattle rustling in the infamous Nueces Strip. McNelly’s badge was probably a gift from local ranchers and while it has been described in authentic documents, it has not survived, according to Johnson.

The earliest surviving badge belonged to Texas Ranger Ira Aten and dates to the 1880s. Early badges, like the Aten badge, were more than likely gifts and were crafted by a local silversmith or the Ranger himself. Even then the preferred starting point was a Mexican coin (the Aten badge started as a Mexican Ocho Peso coin).

In 1935 the Texas Ranger badge was based on a shield design for the Highway Patrol. A 1950-era badge issued to the Rangers featured blue enamel paint and became known as the blue bottle cap badge, according to Johnson. Neither caught on with the rank and file.

(Left) Records at the Texas Ranger Hall of Fame indicate that Martin E. Trejo joined the Texas Rangers in 1935. This is one of his original badges. Photo courtesy of the National Cowboy and Western Heritage Museum.

It wasn’t until 1961, when Homer Garrison, Jr. was head of the Texas Department of Public Safety, that the circle/star badge created from the Cinco Peso coin was issued by the state to all Texas Rangers. Texas Ranger Hardy L. Purvis donated the initial batch of Cinco Peso coins so all 62 Texas Rangers could be issued a badge. Purvis made the donation in memory of his father, Texas Ranger Captain Hardy B. Purvis, and his mother. In 2021, modern badges are made by three silversmiths/engravers in the state (one in Fort Worth, one in Bandera and one in Clarendon). Before anyone can start work, they need a letter of authorization from the Chief of the Texas Rangers to give them permission to complete the work. They use either the 1947 or 1948 Cinco Peso coin almost exclusively. Each coin goes through dozens of steps and countless hours of artistic effort to morph into a badge with a domed star and a flat rim.  Badges are now part of the standard equipment issued to a Texas Ranger; visit this link to see the full equipment list (https://www.texasranger.org/texas-ranger-museum/texas-rangers/standard-issue-equipment/).

“Unless you know the seller of the badge or can trace its possession by a Texas Ranger’s family through the years, authentication becomes a real problem,” Johnson says. Serious collectors who are able to do their research will pay amazing sums of money for authentic badges, Johnson says.  Similarly, beginning collectors who do not complete their research will probably pay amazing sums for a fake Texas Ranger badge.

It was easy for me to locate more than one Texas Ranger badge for sale on the internet. Some were clearly marked as replicas but not one was the real thing.

It’s easy to think the badge gives a Texas Ranger his authority. It doesn’t. A Texas Ranger derives his or her authority from their commission and what it represents.  Earning the Cinco Peso badge is one of the hardest things to accomplish in law enforcement. Some classes have more than 100 candidates for one position, Johnson explains.  He figures that the Texas Rangers intend to keep it that way.