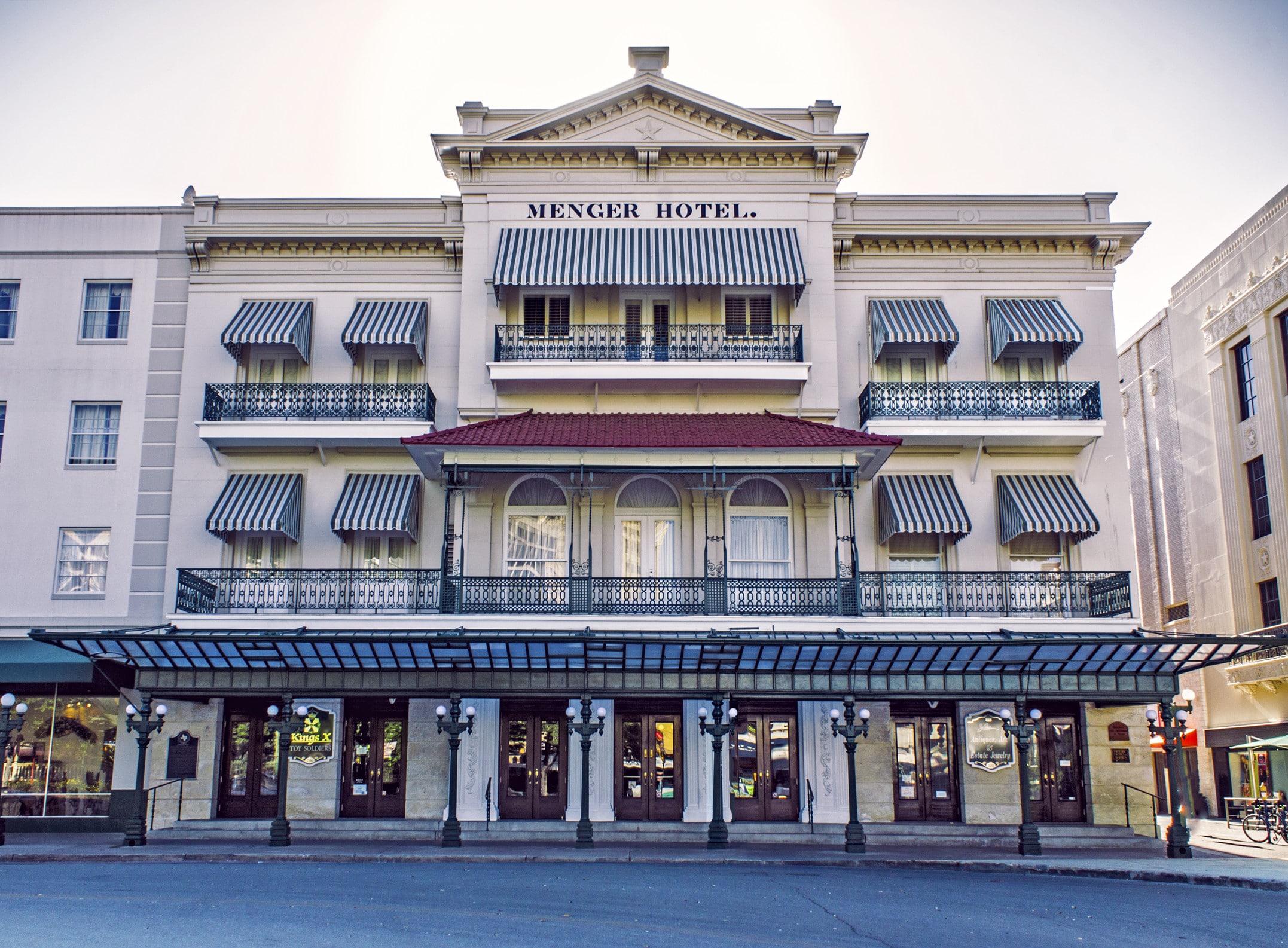 As a native San Antonian, I have visited every historic site, all the museums multiple times, and have been to the Alamo more times than I can count on both hands, and most toes. But there is a historic gem of a destination right next door to the Alamo that is one of my all-time favorite stops. Located in the Menger Hotel (c.1859), with a mountain of historic stories to tell on its own, the Menger Bar (I call it the Roosevelt Bar, and I’m not alone) is a verified blast from the Old West past.

My husband and I don’t live in San Antonio anymore, but on January 1, 2022, we found ourselves there unexpectedly and decided to visit the bar. It had been a while. It doesn’t matter how many times I’ve been to the Menger Bar; I always see something new and have a great experience.

The Menger Bar, the oldest continuously operated saloon in San Antonio, is an intimate one-room bar and a replica of the taproom in the House of Lords Club in London. It’s covered in solid carved and paneled cherrywood: the bar, the walls, the railings, the cabinets, the ceiling. Glass and mirrors add to the cozy ambience, while old-timey Edison bulbs make for perfect lighting. The main floor has red tile floors and pub style seating with long tables. There is a steep narrow staircase that takes you upstairs to a loft overlooking the bar, with squeaky wooden floors, and a ceiling low enough that some people might have to stoop. The bar is an appropriately masculine space in design, and the gigantic, mounted moose certainly adds to the authenticity of its manly history.

So why call it the Roosevelt Bar?

During the Spanish-American War in 1898, the regular U.S. Army was understaffed. So, President William McKinley appointed all commanding United States Army officers to recruit volunteer calvary regiments from western states and territories. Perhaps the most famous of these units was the First United States Volunteer Cavalry enlisted and led by Lt. Col. Theodore Roosevelt.

Roosevelt first visited the Menger in 1892 on a javelina hunt. In 1898, he returned to recruit his regiment by setting up an enlistment table at the Menger Bar. Texas was the ideal place to find the tough and rowdy individuals he needed and ended up enlisting over 1,250 men who were cowboys, Indian fighters, outlaws, Eastern aristocrats, and Ivy League athletes. “We drew a great many recruits from Texas,” wrote Roosevelt, “and from nowhere did we get a higher average, for many of them had served in that famous body of frontier fighters, the Texas Rangers.” These men famously became what were called the Rough Riders.

The regiment was trained nearby, at what is now Roosevelt Park. The Menger Bar continued to be a favorite watering hole for Roosevelt and the rowdy Rough Riders. Ask the bartender to show you the bullet holes!

Being a holiday, the bar was busy the day we visited. I asked the bartender to make me a vintage cocktail, their specialty. He suggested an Old Fashioned, a concoction of muddled maraschino cherry and orange, sugar, bitters, and whiskey, in a rocks glass. I took one sip and discreetly passed it on to my husband, as if he had ordered it. Apparently, whiskey is not my thing. I spotted someone at the bar with a beautiful Bloody Mary, so I ordered one of those and was not disappointed!

I did notice something that seemed out of place. On the top of the bar there is a row of display cubbies containing footballs. I asked about this, and the bartender explained that the footballs are from the Alamo Bowl. Still, I asked what does that have to do with Teddy Roosevelt or history?

It happens that in the days of brutal and deadly American football, the forward pass was illegal, so battering strength and violence was the only way to win the game. Early on, now President Roosevelt supported the game believing it was essential for young men to engage in such sports to prepare them for battle, to be like a Rough Rider. But when the death toll kept mounting on the field, he acknowledged it required reform if it was to be saved. Using his “big stick,” Roosevelt summoned the head coaches and representatives of the premier collegiate powers urging them to curb excessive violence to set an example. In 1906 the forward pass was legalized, and dangerous mass formations were abolished. The footballs up on the bar are just a different kind of nod to Roosevelt. And I’m fine with that!

We sipped our drinks inside for a bit, then headed out to the adjacent hallways, where we enjoyed viewing museum quality exhibits containing historic items from the Roosevelt times and more. As usual, we could have spent hours roaming around surrounded by the glorious history of the Menger Hotel.