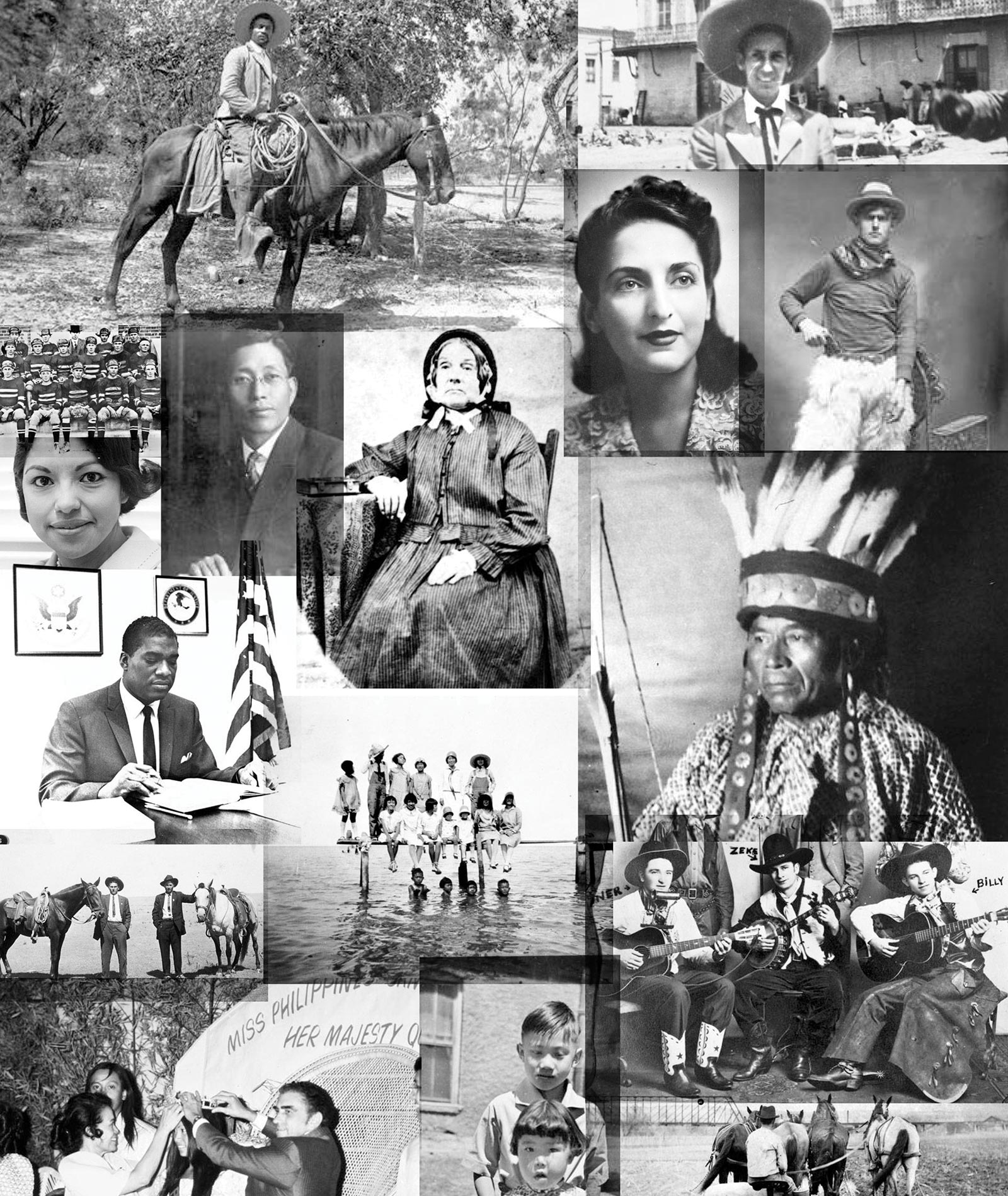 It Takes a Village

Whether a “from-here” or “come-here” Texan wanting to appreciate the diversity of your great state, or a visitor who wants to learn what makes the 28th state and its people so special, make the Institute of Texan Cultures (ITC) your first stop.

The location alone of this fifty-year-plus institution signals its symbolic place in a multifaceted state. Situated on the University of Texas at San Antonio HemisFair campus, next door to the Henry B. Gonzalez Convention Center and the Tower of the Americas, directly across the freeway from the Alamodome, and just a short walk from the Alamo and the River Walk, the ITC is a popular destination for tourists, residents, students, researchers, and armchair historians. The Institute complex is also family-friendly and filled with hands-on activities for children.

Entering the front door of culture

Greeted by a large neon Texas flag, you realize an experience as big as Texas is about to begin. The ITC wants you to enjoy a memorable experience, not simply gain more knowledge about the cultures that settled throughout Texas.

The ITC is more interactive than a typical museum, delivering a more personal and firsthand encounter with history. The ITC draws from a pool of docents willing to share their personal heritage, such as quilters who will spin cotton and then weave it into fabric on a Swedish loom. The complex provides an immersive multicultural experience for appreciating how different cultures blend together in Texas.

Through research, collections, exhibits and programs, the ITC serves as the catalyst for the understanding and appreciation of Texas and Texans. Its 182,000-square-foot complex affords 65,000 square feet of interactive exhibits and displays. The Institute library on the third floor houses manuscripts, rare books, personal papers, more than 3.5 million historical photos, and more than 700 oral histories.

The ITC exhibits and displays represent many cultures and their impact on the history and development of Texas. The main exhibit floor is divided by cultures and ethnicity, starting with Native Americans, continuing with sections dedicated to twenty-six other cultural and ethnic groups such as German, Filipino, Norwegian, Jewish, Danish, Lebanese, Polish, Chinese . . . and more. Just pick out the cultures that interest you most, then read, interact with, and digest everything in that section to learn how those particular groups contributed to Texas history.

The Dome Theater combines twenty-six overhead screens into a 360-degree theater, which is positioned as a focal point surrounded by the main exhibit floor and cultural sections. The screen images are synchronized to tell the cultural stories of Texans. The multiple projectors are digital today, but just imagine trying to keep up with multiple film projectors! The first show begins at 11 a.m., with subsequent different shows along different themes, roughly timed to start with the completion of guided and thematic tours in a grand way.

An institute for the people

While the term “institute” might first bring to mind society or organization that carries on a particular work or educational character—perhaps research or humanitarian interest—in the ITC’s case it’s a different kind of undertaking. Texas’s 59th Legislature, in May 1965, established the ITC as a permanent state agency. The next biennium followed through with further funding for a total $10 million investment.

Sharing a fifty-year legacy with the Heritage Trails program, originally the ITC opened as the Texas State Exhibits Pavilion for the HemisFair ’68 celebration. The Institute of Texan Cultures Library was established in 1965 as a repository for books and images of artifacts being collected by researchers preparing exhibits for the Texas Pavilion. The legislature further tasked the ITC with designing and constructing a building over the next three years to house the exhibits for use long after the fair, the first world’s fair to be held in the American Southwest.

Considering the civil unrest at the time, heightened by the assassination of Dr. Martin Luther King Jr. on April 4, 1968, just two days before the ITC opened, understanding cultural differences would prove vitally important. “The Texas Pavilion showcased the many cultures that came together to build Texas,” explains James Benavides, director of ITC Communication and Marketing. The institute used exhibits of artifacts and personal memorabilia that were focused solely on telling the story of people across ethnic groups.

Education at its core

Education, in fact, is the continuing mission of the ITC. The ITC serves as the state center for multicultural education by continually investigating the ethnic and cultural history of the state and presenting the resulting information with a variety of offerings designed to entertain, inspire, and educate. The institute further educates through outreach programs to schools, other groups, and teacher-training workshops.

For visiting school groups, the ITC offers guided and non-guided tour options of the main exhibit floor, the Back 40 Living History Area, and the Geometry Lab (SAVIG). The Texans One and All tours explore why and where different cultural groups came to Texas, including their stories and traditions. The one-hour tours address the requirements of the Texas Essential Knowledge and Skills (TEKS), but if a field trip isn’t feasible, teachers may contact the ITC for TEKS field kits that bring the ITC to the classroom.

Once a rural term referring to farm acreage, the Back 40 of the ITC draws students into a turn-of-the-century outdoor living history area, complete with a one-room schoolhouse, adobe house, army fort barracks, log cabin, and hay barn. The Back 40 Experience tour, where living historians and docents depict the lives of Texas pioneers, gives students the immersive experience to compare their lives to the past.

Programs for the public

By far, the annual Texas Folklife Festival is the largest event hosted by the institute since 1972. The annual June weekend event draws more than 35,000 people to celebrate the food, dances, arts, and music of more than forty different cultures. The institute also hosts various other annual and seasonal events, including the Asian Festival, Spring Break on the Back 40, Texas Frontier Week, Pioneer Sunday, and Memorial Memories, an annual musical tribute to American military personnel.

Throughout the year the institute hosts exhibits, educational programs, and special events that encourage kids and adults to explore the cultural and ethnic roots of Texas. Temporary and traveling exhibits highlight specific components of Texan culture, such as military history and the people who made it, stories on immigration, and ethnic groups that have come to Texas since the ITC opened in 1968.

The ITC is a unique venue that can host a variety of different events throughout the year. The institute offers multiple indoor and outdoor event spaces for corporate training, non-profit organization strategy meetings, and private events such as mixers, performances, weddings, or family gathering. The Dome Theater, with its large screens, can accommodate large gala and party events. The ITC has outdoor Back Patio, Veranda, and Back 40 areas for excellent event spaces as well.

Museum for the masses

In 2010, the ITC formalized an affiliation agreement with the Smithsonian Institution in Washington, D.C., recognizing a level of professionalism granted to only a few museums throughout the nation. The Smithsonian has a long and proud relationship with the ITC, dating back to 1972 and the first Texas Folklife Festival. As an affiliate, the Institute gains access to the Smithsonian artifacts and other valuable resources to complement and broaden exhibits.

As most museums serve a local or regional audience, the ITC seems focused at least partially on building the visitor experience and marketing itself as the presenter of San Antonio and ethnic history of south-central Texas. The continual modernization of the exhibits and the entire visitor experience positions the ITC to be a place of compelling intellectual dialogue. As a state museum, for instance, the ITC can support current conversations about Mexican border movements in Texas now and in the past.

Recognizing the continuing relevance of immigration, the portrait-photography project “Huddled Masses; Who We Are” is prominent at the entrance to the ITC. San Antonio photographer Ramin Samandari created the collection of three hundred portraits featuring people holding whiteboard placards bearing written details of their ethnic heritage. The exhibit’s title is drawn from the most often-quoted lines of the famous Emma Lazarus poem:

An active role in civics and citizenship

Far from resting on its laurels as a static repository, the ITC plays a dynamic role in the society it reflects, partnering with U.S. Immigration and Naturalization Services to hold numerous citizenship swearing-in ceremonies per year.

The ceremonies are held in the Dome Theater, surrounded by patriotic images. “The ITC essentially becomes a federal courthouse where a judge typically administers the oath of allegiance to over 250 candidates who become U.S. citizens,” according to Benavides.

When opened in 1968, the ITC was defined as a permanent research and production center dealing with the history of the people who make up Texas. While UTSA plans greater emphasis on creating more engaging educational and cultural experiences, over the past half century the ITC original mandate has not changed. The institute looks forward to adapting to serve new generations of Texans and Texas visitors, redeveloping classic exhibits, adding engaging new exhibits, developing new digital assets, and pursuing a long-term sustainability plan.

For the next fifty years, the ITC expects to continue upholding its charge to serve as the premier center for learning about the diverse cultures and ethnic groups of Texas. The new and renovated exhibits of the ITC will exemplify what a museum and teaching institution should aspire to become, while immersing children and inspiring adults to explore their own heritage and dive deep into the stories of Texas and Texans.

“We need to pick information, and make it relatable, make it memorable, and turn it into an experience,” Benavides believes. “Docents regularly have visitors get enthusiastic when they recognize someone, maybe a family member mentioned in an exhibit—and that is the experience we are hoping for.”