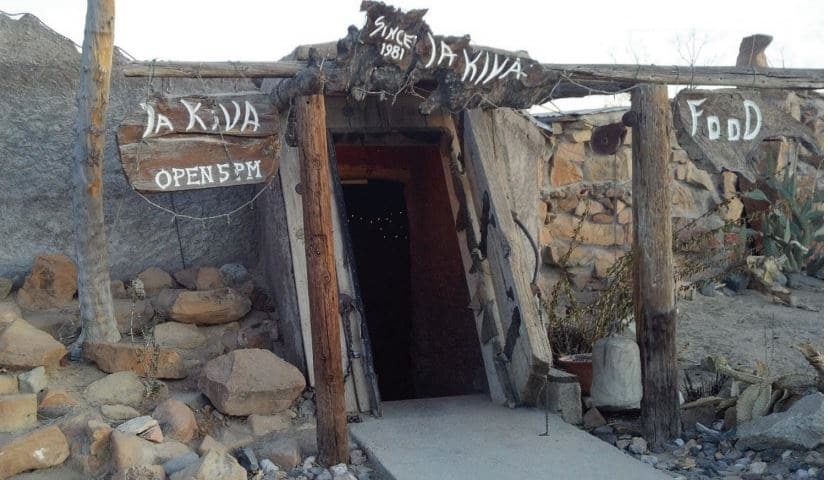 Terlingua is a place like no other. Home to few but visited by many, it’s a destination for adventurers and wanderers, those seeking to escape the ordinary. Situated just a few miles from the U.S.-Mexico border, Terlingua is best known, perhaps, for its annual CASI Chili Cookoff. However, throughout the year, visitors come to float the Rio Grande, see Big Bend National Park and Big Bend Ranch State Park, camp, hike, ride and stargaze.

What would all this be without a perfect ending to the day — namely, a good meal and drinks at a local watering hole that has a story, albeit a story with a heartbreaking twist? La Kiva, once described as the “brain-child of Gil Felts,” provides that.

Felts arrived in Terlingua from Sabinal back in the 1960s when Terlingua was still an on-and-off quicksilver mining town. Looking to join in on the boom, Felts — a former social studies teacher, an army vet and an eccentric — made a living by mining bat guano to sell to area farmers. But at some point in the ’70s, when the mines dried up, Felts decided it was time to realize his dream of opening a bar in the middle of the desert.

He built La Kiva into the banks of Terlingua Creek. Construction in this type of landscape was difficult due to the lack of equipment and supplies, as well as the harsh temperatures in the summer. When it was finally finished, a legend in the bar world was born.

The place was odd, to say the least, but odd in this case was beautiful and brilliant. Patrons would descend into a mine shaft — the technical definition of a kiva is a subterranean room — to be greeted with stone walls decorated with bones and skulls, cauldrons and the infamous “Penisaurus Erectus,” a big-cat fossil assembled from random bones and set into the wall.

Known for his quirky style, his constant companion pet parrot Antilles and his epic Halloween parties, Felts embodied the spirit of Terlingua. GQ named the place “the #1 most bizarre bar you must visit before you die.”

After Felts’ death in 1989, La Kiva was taken over by his nephew, Glenn Felts. Glenn was an outsider, a clean-cut electrical engineer from Dallas, and the locals were skeptical. Could he could keep the spirit of what his uncle created alive? It would be a hard act to follow.

Glenn left the bar pretty much the same, which made people happy, and it didn’t take long for this tight-knit community to warm to him. He had a smile impossible to resist, and his close-shorn hair grew into long, blond curly locks. If you were offered a Mind Eraser as a newcomer, a drink made from vodka, Kahlua and club soda, you felt special, part of the club. Or was it that Glenn just really liked Mind Erasers and didn’t want to indulge alone? It didn’t matter. The business thrived, as much as one can in this part of the world, and it was a staple hangout for locals.

Glenn owned and operated La Kiva from 1991 to 2014. On a cold night in February of that year, after a night of partying with a friend, Glenn was murdered outside of La Kiva by popular river raft guide Tony Flint, who claimed self-defense. The town was ripped in two as both men were known and admired in the community. As one patron commented, “We’ve lost our innocence.” There was an investigation, a trial and a verdict of not guilty.

Once again, La Kiva, the iconic bar that Gil Felts created, was at a crossroads — until John Holroyd, a biotech engineer from Wisconsin who’d been visiting the area since the Gil Felts era, purchased the bar and restaurant in August 2014.

Sensitive to its history, Holroyd renovated La Kiva, sprucing up the nearly 40-year-old venue and bringing it up to code. La Kiva reopened in 2015 with a new kitchen, a new menu, some of the old folks and some new. It will never be the Gil La Kiva or the Glenn La Kiva, but it’s still La Kiva. And there’s no other place like it.