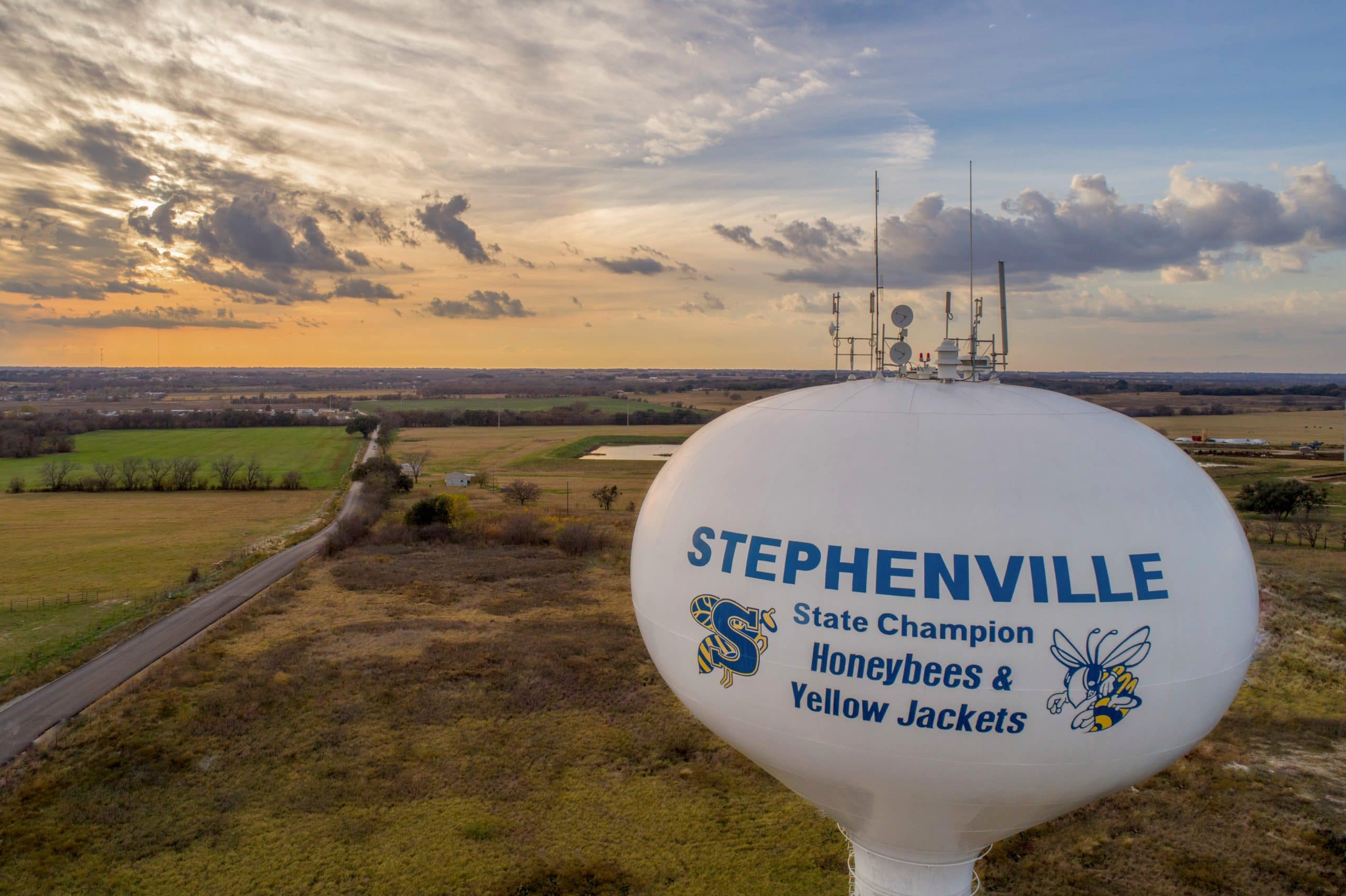 In the heart of cowboy country, centrally located between Waco, Abilene and Fort Worth, lies a community small in size but big in musical stature. Stephenville has a population of just under 21,000 and serves as the seat of Erath County. With its recording studios, radio stations, big-name music festivals and a university that emphasizes music and the performing arts, it’s no wonder Stephenville was deemed a Music Friendly Community by the Texas Music Office, in the Office of the Governor.

Stephenville’s story began in 1854, when John M. Stephen settled on-site and donated land to George B. Erath to build a county courthouse along with lots for settlers and churches in exchange for the town’s namesake. Subsequently, Erath County and the town of Stephenville were officially founded in 1856.

The first two years showed promising growth for Stephenville, but Comanche raids and the hit the community took from the Civil War caused inhabitants to leave the area. In the 1870s, the town experienced a revival with the emergence of its farming and agriculture industries that, to this day, serve as the backbone of the community.

The town was permanently incorporated in 1889 with the arrival of the Fort Worth and Rio Grande Railway, and the following decade brought the erection of the stone buildings that make up Stephenville’s town square, as well as the formation of John Tarleton Agricultural College — now known as Tarleton State University.

The 1950s was a watershed decade for the city, establishing creameries, hatcheries, feed mills, the rodeo industry and other businesses. The growth of these industries has made Stephenville what it is today — a quaint Texas agriculture community and Cowboy Capital of the World — but music has become an essential part of the town’s makeup.

The people of Stephenville are proud of their musical background — and rightfully so. This small Texas town has every credential to be considered an appealing destination for music lovers. Given its share of popular music festivals, recording studios and radio stations, as well as a supportive community, Stephenville checks all the boxes.

Julie Smith, manager of the Stephenville Tourism & Visitors Bureau and a town native, describes the city’s musical identity as “a diverse mix of genres and events that host regional and national acts throughout the year.”

Stephenville has become a prime stop for touring artists, situated at the junction of US Highways 377, 281 and 67, as well as being equidistant from both the East and West Coasts.

An essential element in being deemed a Music Friendly Community by the Governor’s Office is a collaboration with music education programs at institutions of higher learning. Tarleton State University has served as an important center for music in North Central Texas for the past century and established a dedicated fine arts facility in the 1960s that was the first of its kind west of Austin.

According to Dr. Vicky Johnson, head of the Fine Arts Department, the university is noteworthy in that it offers “a range of opportunities and events in the form of classical music, jazz, musical theatre and folk tradition. Groups such as the Bolshoi Ballet, Fort Worth Symphony, African dancers and Celtic groups have provided an enriching experience for our students and the com- munity.”

The Clyde H. Wells Fine Arts Center on campus hosts about 250 public events each year that are open to students, faculty and, well, anyone interested in treating themselves to a top-notch performance. “Kids in Stephenville are raised around music,” says Lori LaRue, operations man- ager at the Center. “Many of them play instruments, support local artists and go on to study music in an array of genres.”

LaRue says Stephenville is “all out for music” and credits the community for assisting in the effort to raise the city’s musical profile.

“If I have to describe Stephenville in one word, it would be warmth,” she explains. “The community welcomes you with open arms and supports artists.”

To that end, Tarleton has produced musicians such as Americana artist Ryan Bingham, country singer Koe Wetzel, and Paul Oliger, the guitarist for Shea Abshier & the Nighthowlers.

An established agriculture, rodeo and dairy farming community, Stephenville has become an important music destination in the state, thus earning the honor of Music Friendly Community. And friendly it is, radiating a warmth only a close-knit community can provide.

It doesn’t matter if you’ve lived in Stephenville your entire life or if you’re just passing through, it’s a good bet you’ll be met with a smile and tip of a hat by a community that loves music, appreciates artists and makes you feel like family.

Stephenville boasts festivals and concert series that attract tens of thousands each year from around the country. The community has banded together to create multiple events for artists — whether their names be up in lights or up-and-coming — to entertain the crowds and turn Stephenville into a music hub. Two names in particular, Larry Joe Taylor and Doug Montgomery, have used their influence in the music industry — and desire to promote Stephenville — to create some of the most impressive events in the region.

What better way to spend the toasty Texas nights than listening to live music, free of charge, under the starry sky? The Birdsong Amphitheater on the banks of the Bosque River in Stephenville City Park sets the stage for the Texstar Ford Summer Nights Concert Series.

Montgomery is the visionary who created the series, now in its 19th year, which provides great Texas music at no charge. “The Birdsong family kindly donated the amphitheater to the community,” Montgomery says, recalling the genesis of the series. “One day, Larry Joe Taylor and I went to grab a barbecue sandwich for lunch and decided to look at it during the final stages of construction. While we were there, Larry suggested I put together a concert series and said he’d help book acts. And here we are 19 years later.”

Montgomery is a childhood friend of Texas music legend Jerry Jeff Walker and has developed professional relationships with other well-known artists as well, which he uses to book the Summer Nights series. But just because he’s connected to some big-time players doesn’t mean Montgomery strays from the original intent of the series.

Montgomery is a childhood friend of Texas music legend Jerry Jeff Walker and has developed professional relationships with other well-known artists as well, which he uses to book the Summer Nights series. But just because he’s connected to some big-time players doesn’t mean Montgomery strays from the original intent of the series.

“When we started, it was singer-song- writer shows,” Montgomery explains. “The city has been amazing and helped pull the ropes to get this thing going. A few years into it, they wanted to bring some bigger names into Stephenville. That led to our first big act — Ricky Skaggs. He’s a good friend who’s played for us 12 or 13 times during the past 18 years. Ricky drew a crowd of about 7,000 the first time he headlined. Since then, we’ve brought in some big names in Texas music like Michael Martin Murphey — but we always make sure to incorporate singer-songwriters. I have a lot of respect for their god- given talent and always want to make sure and show my support.”

Taylor is a musician, songwriter and festival connoisseur who’s attracted performers to Stephenville for decades. The creative mind behind both the Larry Joe Taylor Texas Music Festival in the spring and the Rhymes & Vines Fall Festival in autumn, Taylor has built the most successful music festival of its kind in the state.

The Larry Joe Taylor Texas Music Festival — now in its 31st year — is held in April and attracts people from around Texas, the nation and even the globe. This festival is a six-day camping and music extravaganza on four stages that begins at 10 a.m. each day and goes through the eve- ning. Afterwards, campfire jams blanket the Ranch into the wee hours.

They say everything is bigger in Texas, and the LJT Texas Music Festival is a Texas-sized affair. Each year one can expect more than 50,000 campers and music lovers to create an atmosphere that may be unmatched in the Lone Star State. People return year after year not only for the music but the relationships created. And there’s no shortage of musical acts. “Stephenville is centrally located in Texas,” Taylor says, “so it’s the perfect stop for Texas.”

The Rhymes & Vines Festival — which celebrated its 14th year in September — is a smaller version of the LJT festival but manages to attract thousands of spec- tators, along with noteworthy musicians like Gary P. Nunn, Terri Hendrix, Casey Donahew Band and Walt Wilkins.

Every town has a go-to spot for music and good times. Although relatively new on the scene, Twisted J Live has assumed the position as a prime venue that attracts myriad musical acts. Officially opened in 2016 by Cody Johnson, Twisted J actually began as a boutique in 2011. The boutique experienced rapid success, eventually encouraging Johnson to expand the business, adding first-class embroidery and silk-screening equipment that allowed the boutique to morph into a custom apparel company.

Given the success of the embroidery and silk-screening business, Twisted J moved to a larger location with a stage and bar area so people could shop, drink and listen to music. Also in-house is a recording studio, as well as Texas Homegrown Radio, which was established in 2016 and attracts listeners from all corners of the globe. In short, Twisted J provides all the tools for any performer, big or small, to ply their trade.

Twisted J is known for the variety of acts it features. “We like to experiment with acts we bring in while still catering to what locals request,” says Kolby Cunningham, the venue’s entertainment director. “In the past we’ve featured the Randy Rogers Band, the Bellamy Brothers, Casey Donahew and Tracy Byrd; but we’ve also hosted Riff Raff, Slim Thug and even tribute bands. In a few weeks, we’re hosting a fundraiser that will include Drowning Pool, Submersed and Mark Tremonti from Creed. The first Friday of every month we have a piano bar show that’s turned out to be wildly successful. We aren’t afraid to try new things, and every day we come up with more ideas on how to add on to what’s been created so far.”

Twisted J provides an atmosphere that feels like you’re getting an insider’s experience to a major concert.