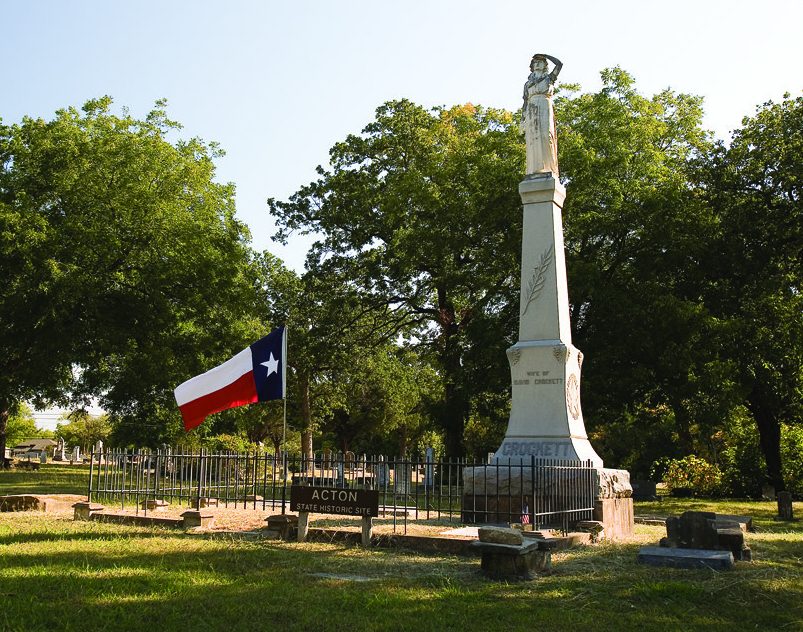 Of the state’s 31 historic sites operated by the Texas Historical Commission, one has the distinction of being the smallest – the Acton State Historic site. It consists of just .01 acre of land located in the Acton Cemetery where Elizabeth Crockett, the second wife of Alamo defender Davy Crockett, is buried.

Elizabeth and David Crockett married in 1815. Both had lost their previous spouses and they had five children between them. Elizabeth and David saw the benefit of joining their families. David said they were “in the same situation, it might be that we could do something for each other.” They had three children of their own, which left Elizabeth with eight children to care for along with her farm.

David spent very little time at home, but Elizabeth was a strong, intelligent, and religious woman who made her own way during her husband’s absence. She died in 1860 at the age of 72. Elizabeth had worn a widow’s black dress since she heard of her husband’s death at the battle of the Alamo in 1836. She was laid to rest at the cemetery in that dress.

In 1911 the state placed the monument at her grave site, a statue of Elizabeth looking off into the distance as if she is expecting her husband to return. Elizabeth ended up in Acton in the mid-1850s after she moved her family from Tennessee to claim a land grant in Acton for the heirs of the Alamo defenders. She stayed there with her two sons until she died.

“It is a matter of just pride to every citizen of Texas that the widow of Davy Crockett found a home in her old age, and after her three score years and ten were fulfilled, a grave on the soil consecrated by his blood — the gift of the country of his adoption. The grave of his widow and the home of his children will make Johnson [now Hood] County a place of pilgrimage to many.
– Charles R. Pryor, Dallas Herald, (Dallas, TX), Vol. 8, №35, Ed. 1, Wednesday, February 29, 1860

While in Acton, the Acton Nature Center is a must-see for nature lovers. The trail leads visitors around the center to view the natural pond filled with croaking toads. Plenty of shade can be found in the ravine thanks to the old large oak trees. Spring brings a large array of wildflowers. Events held year-round at the Acton Nature Center include First Saturday Bird Walks, Monarch Tagging, Star Parties, and S’mores with Santa.

Since Acton is in a picturesque rural setting, a local farmers market is a natural fit. The market offers farm-fresh produce, fresh baked and canned goods, and hand-crafted items made locally. Acton Local Market is held the second and fourth Saturdays, May through October, from 9:00 a.m. to 1:00 p.m.

Only five miles away is Granbury, which is worth a visit to the historic courthouse square. The Hood County Courthouse, built in 1890-1891 and designed by noted Texas courthouse architect W.C. Dodson, has been restored to its former glory thanks to the help of volunteers and the Texas Historical Commission’s Historic Courthouse Preservation Program. It is the first courthouse square to be listed on the National Register of Historic Places. Historical buildings that house boutiques, eateries, wineries, and theaters line the square.  Nearby are quaint bed-and-breakfasts, parks and the Granbury City Beach Park located on Lake Granbury.

A trip to Acton and Granbury is a relaxing and stimulating way to spend the weekend, getting back to nature and exploring history.