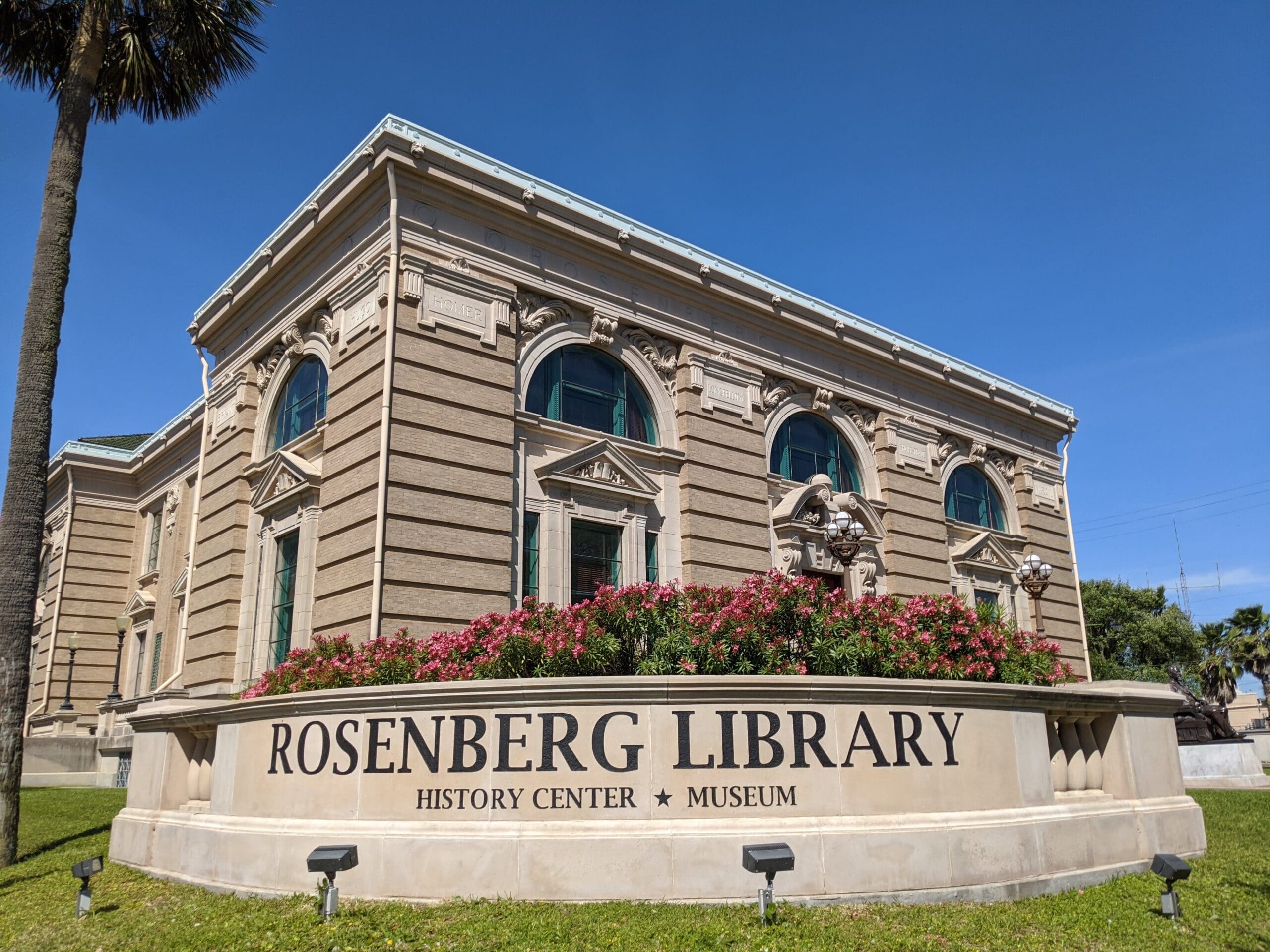 If you Google the question “Which is the oldest library in Texas,” you might be surprised by multiple answers. In April 2017, David Brown of The Texas Signal started the same pursuit retrieving slightly different results than today. The answer is still the Rosenberg Library of Galveston.

Following his death in 1893, Swiss immigrant Henry Rosenberg’s largest bequest went to create the Rosenberg Library as a successor to the Galveston Mercantile Library, which dated back to 1871. The new library was built and opened on Rosenberg’s birthday, June 22, 1904.

“I desire to express in a practical form my affection for the city of my adoption and for the people among whom I have lived for so many years, trusting that it will aid their intellectual and moral development, and be a source of pleasure and profit to them and their children, and their children’s children, through many generations,” reads Rosenberg’s last will and testament.

(Left) A statue of Henry Rosenberg keeps watch in front of the library.

From the beginning, the Rosenberg Library was built to provide more than books. It also houses a museum and archive, and an auditorium that once seated 700 for free lectures. Hundreds of intellectual and meaningful talks reached nearly 150,000 listeners over the life of the auditorium.

Today, the library, museum and archive house more than four million items, including over 100,000 photographs, according to the library’s executive director, John Augelli. “We have the largest archive of early Texas, Galveston History,” said Augelli. “The Texas Historical Society, founded in Galveston shortly after statehood—all they collected came to the Rosenberg Library.”

Besides circulating over 250,000 books annually, the library shares art and historical exhibits, films, and lectures, conducts computer classes, and provides meeting facilities for over 100 groups throughout the year. The library has vast collections of art, historical maps, documents, and artifacts such as Sam Houston’s dueling pistols. Many of the items within the history center are digitized and available online through a separate website.

Since 1941, the city and county of Galveston has contributed to support the library with about 75% of the institution’s operating budget coming from public funds. Private endowments and gifts provide the remainder. The Rosenberg Library heads the Galveston County Library System, serving as the county library as well, providing outreach services to seniors, schools, home-bound patrons, and hospitals throughout the county.

In 1971, the Moody Memorial Wing opened, doubling floor space for more books, children’s library, museum galleries, special collections, meeting rooms, and a historical research center. Lectures and events were moved to the first floor as well, until Hurricane Ike flooded the first floor of the Library in 2008.

One final phase of renovation is nearly complete. Phase VII renovations restored the top floor of the 1904 Rosenberg Wing, including the original leaded glass ceilings panels, arched windows and skylight that had been completely hidden since the 1950s. The renovations created more exhibit space for one-of-a-kind items never displayed before. The new open-concept exhibition areas will include new custom exhibit cases and multimedia displays as well.

At least three other libraries covet the distinction as the oldest library in Texas, but experts like Mark Smith, director and librarian for the Texas State Library, agree with Augelli’s position: “We are the oldest operating library in Texas.” The Rosenberg Library truly is one of the most utilized libraries in Texas and clearly fulfills Henry Rosenberg’s mandate to contribute the most to Galveston’s intellectual and educational progress.

Galveston and Texas History Center
Located on the fourth floor of the Rosenberg Library, the Center provides assistance to local historians, scholars, genealogists, and students. It collects, preserves, and makes available historic records of Galveston and early Texas.
galvestonhistorycenter.org

Read more about why the Rosenberg Library is the oldest library in Texas!
https://www.texasstandard.org/stories/why-three-libraries-claim-to-be-the-oldest-in-texas/