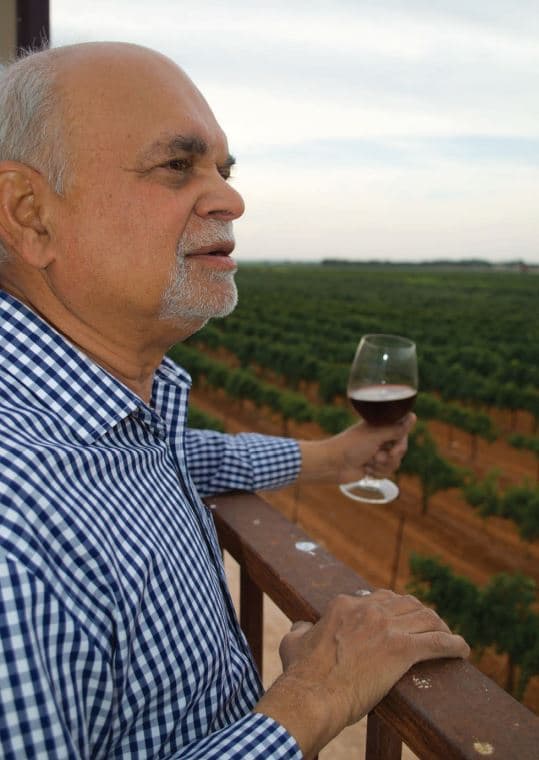 Every summer morning before sunup, Dr. Vijay Reddy drives 45 minutes from his Lubbock home out to the Terry County acres he’s cultivated for four decades.

It was the rich farming soils of the Llano Estacado that brought him here all those years ago. Today it’s the 32 varieties of wine grapes he grows just outside Brownfield that he’s come to love.

Reddy’s passion for the delectable fruit is evident as he surveys vineyards on the verge of harvest. Rows radiate out from a lush lawn that the Reddys began offering up as a special-event venue in 2017. Carefully cultivated canopies of leaves shade clusters of cabernet, sangiovese, merlot — the ever-popular varieties he knew from the start would do well in the sandy loam of West Texas.

Reddy’s call to the land began back in south-central India, where he came from a farming family and was knowledgeable about cotton. In the 1970s, Reddy, three brothers and a sister all immigrated to the United States to pursue study in a variety of disciplines. Having attained an undergraduate degree in his home country, Reddy traveled to Kansas State University for a master’s in agronomy and soil science. After completing that degree in 1973, he enrolled at Colorado State for a Ph.D., which he earned in 1976.

It was on a visit to see his brother, Prabhakar, an engineering student at Texas Tech University, that he found himself most at home. “I looked all around West Texas,” Reddy explains, “and talked to farmers.” Recognizing the urgent need for agricultural consultants in the region, he set up a consulting practice and a soil testing laboratory in Lubbock that soon garnered multi-year contracts. He applied precise techniques relevant to all soils and all crops, from the Texas Plains and Panhandle to New Mexico and Oklahoma.

Reddy soon acquired 2,000 acres of his own near Brownfield, growing cotton and peanuts. Making the acquaintance of Yoakum County farmer Neal Newsom and his father, Hoss, in the 1990s was a turning point in Reddy’s crop cultivation.

The Newsoms had been planting grapes since 1997, five years before Neal brought in his grape petiole samples for nutritional checkup to Reddy’s lab. Reddy was aware of the Newsoms’ fledgling efforts, and when Neal suggested, “Try a few grapes,” Reddy was game.

Reddy started with five acres of cabernet that year. “We didn’t even know if we could sell grapes,” he says. There weren’t enough wineries in Texas — possibly 20 back then — to be certain of demand. The first couple of years of Reddy’s venture, indeed he couldn’t market everything he grew.

Gradually, however, the roster of Texas wineries expanded well outside the Hill Country and established historic wineries such as Val Verde in Del Rio. In Lubbock, winemaker Clinton “Doc” McPherson joined in a partnership with Llano Estacado Winery in Lubbock. CapRock Winery, also in Lubbock, soon followed.

Still, until the early 2010s, “No one really knew grapes were being grown” in West Texas, Reddy says, outside of the vintners and industry specialists like the Newsoms, the Binghams, the McPhersons, Bobby Cox and “Texas Wineslinger” Russ Kane.

For Terry County the boom came with recognition of bumper crops and a burgeoning number of wineries through – out the Lone Star State. Texas boasts some 470 today — and 80 to 90 percent of their Texas grapes come from this remote, high, flat country of West Texas. Both the soil and the warm days/cool nights climate, as well as the high elevation of the Llano, are an excellent match for wine grapes, Reddy explains, though hail and late freezes pose ever-present risks.

Reddy grows his 32 varieties now on 320 acres, all in one parcel in Terry County. He continues to rely on the “king cab,” cabernet sauvignon, and other stalwarts such as sangiovese and tempranillo but devotes half-acre to five-acre plots to experimental or exotic varieties such as aglianico, barbera or negromado, as well as montepulciano, which Reddy and his wife, Subada, tasted in Italy and thought, “Maybe we’ll try it.”

Some grapes, like the favorite viognier, Reddy plants because wineries request it. These and other white grapes mature first, and are ready for harvest around mid-August. When the chemistry is just right — when seeds have turned completely brown and sugar content has reached the right level (around 24 percent for the sweet white grapes), picking begins. It’s a mechanized process, as is the juice squeezing; no fruitstomping feet in bathtubs here!

Still, it’s that deep, multi-generational farming experience that matters. “The farmers of West Texas aren’t only growing grapes but also cotton, wheat,” Reddy says. “You have to run a tractor.”

Like farming knowledge, grapevines take strong hold on the land: with roots up to 15 and 20 feet, they can obtain moisture from far down. How old do they get? Perhaps a century — and they can remain productive for 50 or 60 years of that life span. Such ancient vines are “just like an old man,” Reddy says with a smile, “who has all his intelligence and faculties but may not be able to do all the jobs he once did.”

Reddy doesn’t seem to have slowed the pace of his own wine business. Retiring from his soil laboratory a few years ago, he began putting more energy into the development of his acreage east of Brownfield. A two-story house in the middle of the site provides 360-degree views of the operation, as well as a place to entertain friends or stay overnight as needed, especially during the busy harvest season. Last year Reddy turned a previously built two-story barn into a dual-purpose winery and event venue with convenient parking, dinner and dance floor, stage and screen, and its own bride’s room. Son Akhil Reddy of Dallas is a partner in the vineyard venture, ensuring the business continues to grow with the next generation.

Like many area growers, Reddy welcomes visitors for tours by advance arrangement. He’s eager to show how the wine industry is transforming not only the economy but the tourism prospects for Brownfield and Terry County, a goal the local Chamber of Commerce works year-round to pursue.

On the second-floor deck of his headquarters, Reddy uncorks a bottle of his special Brownfield Blend red and savors a sip. When asked which of his varieties he prefers best, he demurs, as any good parent should.

“Oh, I like cabernet and montepulciano, but also moscato,” he muses, before arriving at a more definitive answer. “All of those 32 varieties are my favorites!”