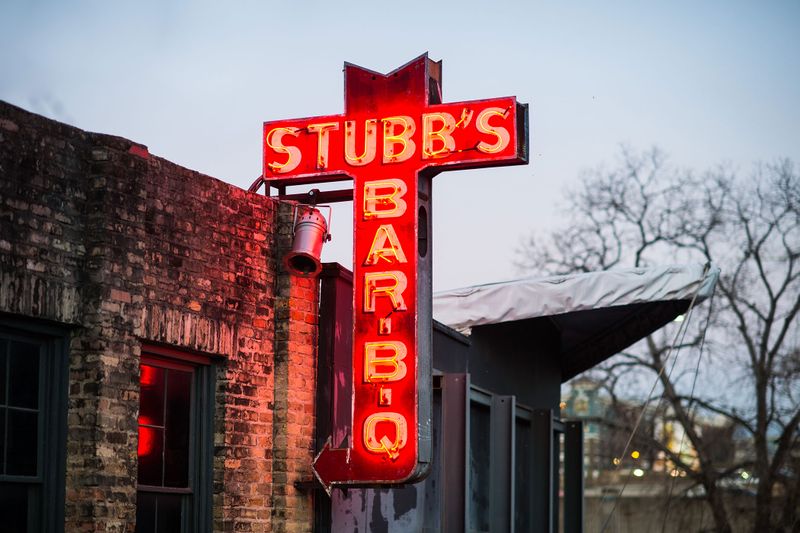 The smell of Southern comfort fare pervades the century-old walls of Stubb’s BBQ in downtown Austin. Sunday brunch-goers carry towers of flakey biscuits, succulent fried catfish and — of course — hearty slabs of slow-smoked brisket to their tables. Accenting this mouth- watering aroma are the rich sounds of the Original Bells of Joy, the gospel outfit currently leading diners in a vocal celebration of faith. “Our Sunday brunch can start off easy,” says Stubb’s cofounder Eddy Patterson. “Everyone’s sitting down, watching the band. But by the end of it, they’re standing up and shout- ing ‘Hallelujah!’”

As the city’s premier gospel brunch, Stubb’s weekly formula has remained unchanged since the event’s conception — indulgent food set to uplifting music, performed each Sunday by some of the state’s most prolific gospel acts. “As the cap to an amazing weekend, there’s a celebratory vibe to it — plus, it’s good hangover food,” says general manager Ryan Garrett “You get a full buffet, plus some of the best gospel music you’re gonna find any- where — for 25 bucks!”

Stubb’s inaugural brunch was held shortly after the venue’s 1996 opening, but the event’s roots were laid in 1968, when Korean War vet Christopher B. Stubblefield turned his passion for smoking brisket into a popular Lubbock BBQ stop. Here, touring country and blues acts provided entertainment in exchange for supper. “Stubblefield had an equal passion for music and food,” Garrett says. “Combining the two always proved a recipe for success.”

Closing his eatery in 1985, Stubblefield relocated to Austin, where plans for a combination BBQ restaurant/amphitheater began. Located in the heart of the famed Red River music district, Stubb’s BBQ, as the venue was named, elevated the marriage of food and music to a national level. While Stubblefield wouldn’t live to see its unveiling, in 23 years Stubb’s indoor and outdoor stages have hosted an array of acts, including the Beastie Boys, Snoop Dog, Ween, Metallica — even one Bob Dylan. Although these nationally recognized acts are a far cry from the home- grown artists Stubblefield once hosted, it’s no accident that Stubb’s gospel brunch captures the intimacy of the late pit boss’s Lubbock shows.

Business partners Eddie Patterson and John Scott grew up eating BBQ from Stubblefield’s personal smoker, making them prime candidates to spearhead Stubb’s opening following his passing. While helping launch the Stubb’s line of grocery store BBQ sauces in New York, Scott’s mother, Fran, encouraged the boys to start their future Austin venue on the right foot, with a respect for musical tradition. “Fran inspired us to think beyond our own zip code,” Patterson says. “She brought us to our first New York gospel brunch. Being from Lubbock, we had no idea what that was. We come to find people singing, a minister doing a sermon and everyone eating — the way church used to be back in the day.”

Committed to authenticity, Patterson and Scott decided a Sunday brunch was worth implementing correctly — which involved not only modifying Stubblefield’s heavily Texan menu to include more Southern fare (e.g. grits, gravy, etc.), it also meant securing involvement from local ministries. “One pastor wanted to check us out before bringing his group,” Patterson recalls. “Well, we had a picture of a naked lady dubbed the ‘Stubbs Angel’ behind our [indoor stage] drum set — an artsy silhouette, nothing tacky. That bothered him; we needed to change it. So my mother, who’s sung in church for over 30 years, sent us a choir robe made specifically to cover the picture. [The angel] looked like some- one singing with the ministry.”

Today, gospel groups come from far and wide to perform on Stubb’s indoor stage. Some stay for one Sunday, others a few years,but it’s the dedication of acts who’ve filled performance slots since day one, like the Original Bells of Joy, that made the brunch a footnote in the American music canon. “The history included in this event began with the Original Bells of Joy,” Garrett says, “maybe the greatest gospel act to come out of Austin.”

The Bells’ 1951 track, “Let’s Talk About Jesus,” is considered one of popular Gospel’s defining recordings. (Ray Charles would later admit to “repurposing” the tune for his 1954 chart topper, “I Got a Woman.”) Today, this group’s far-reaching legacy lives on in baritone singer A.D. Watson. At 89 years old, Watson is the Bell’s sole surviving original member. “He’s our backbone. He broke his hip last year, yet still plays our gigs with his walker,” says tenor Julia Cruz, who joined the group in 2009. “Listen to iconic gospel acts like the Pilgrim Travelers — there’s a really low bass voice doing the rhythm. That’s not really done anymore. A.D. still sings those parts like he’s 20.”

Pillars of Texas’ gospel tradition like Watson consider Stubb’s a spiritual sanctuary, where the genre’s uplifting message thrives. “My favorite memories are audiences telling us our music lifted their spirit,” Watson says. “It’s not a performance, but a ministry.” Cruz adds, “[The music] contains a good message to help people facing challenges, even if they’re not religious. For that reason, it’s important to keep it going.”

The event’s longevity has ultimately created a close-knit community of performers, working together to preserve legacies like the Bells’. Says Cruz, “We have two members of the Gospel Starz [a group that’s played the brunch since 1996], Johnny and Bryan Lott, who now also play with the Bells since we’ve lost so many members.” The tradition is furthered still by current drummer Willis Littlefield, nephew of the Bells’ late founding bandleader, A.C. Littlefield.

When one considers the inclusive atmosphere fostered weekly for more than two decades, it’s easy to see why Stubb’s is the city’s most established gospel brunch. According to Eddy Patterson, that sort of authenticity can’t be faked. As surely as brisket will remain a staple of Austin diets, Texas’ gospel community, along with hungry diners nursing hangovers, will continue to impart joy unto everyone who spends Sunday mornings engaged in one of the state’s best-kept musical traditions “I’ve been created to share the gospel through song,” Watson says. “If singing on Sunday’s at Stubb’s is where I can do so, I gladly will as long as I have breath to.”