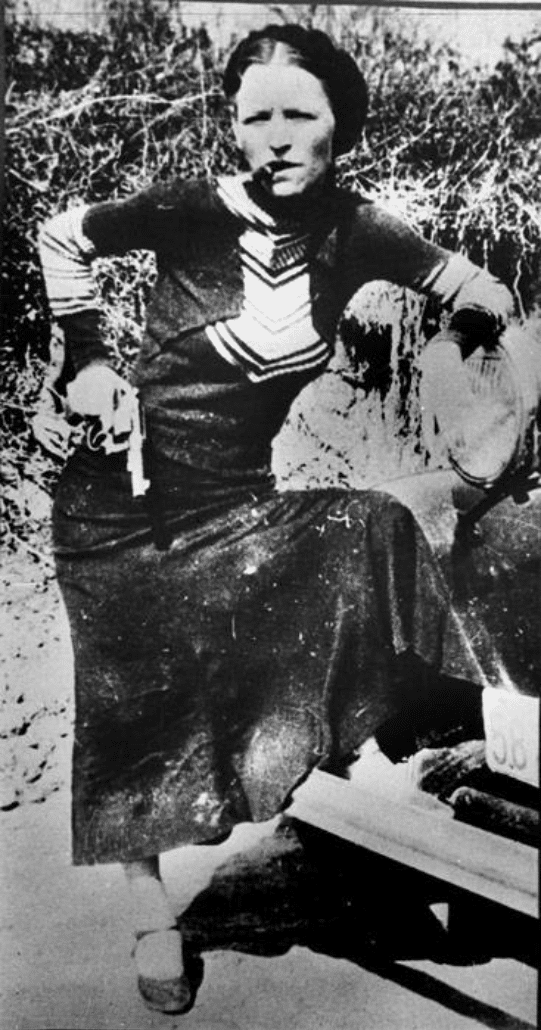 Bonnie & Clyde in the State Archives

As you are traveling on “The Last American Highway,” U.S. Highway 83, you cannot miss the sprawling Collingsworth County Pioneer’s Park on the banks of the Salt Fork of the Red River.

At first glance, you might notice a couple of historical markers, a giant steel arrow, a covered pavilion and families out camping. Or you might wonder what the river looks like under the bridge you just passed over. Hopefully, you get out to stretch your legs and investigate these sights.

To your surprise, you see a historical marker in all caps that reads “THE RED RIVER PLUNGE OF BONNIE AND CLYDE.” You’re not mistaken, it is in fact a harrowing tale about the infamous couple known across the United States for their crime sprees.

You see, their fateful plunge, just so happens to be tied back to the highway you were just on. Before it was designated as U.S. Highway 83, it was State Highway 4. In the summer of 1933, it was completed from the Childress County line to the Salt Fork of the Red River but diverted to the old highway to cross the river on the old 1910 bridge.

On the evening of June 10, 1933, Clyde Barrow was speeding down the highway with Bonnie Parker and W.D. Jones; the trio had plans to meet up with Buck and Blanche Barrow at a point near Sayre, Oklahoma. In Clyde’s haste, he missed the detour notices, tore through a wooden barrier, and they plunged into the river below.

The Pritchard family home was located right in this area of the park, about a hundred yards from the river. The family heard the speeding car and the son Jack Pritchard stated, “the driver must be a darn fool.” Upon hearing the crash, the men sprinted to find the vehicle on its side in the river, missing the windshield.

The marker reads in part: “Rescuing the victims, unrecognized as Bonnie Parker and Clyde, they sent for help. Upon their arrival, the local sheriff and police chief were disarmed by Bonnie Parker … Kidnapping the officers, the gangers fled. In this quiet region, the escapade is now legend.”

Bonnie was seriously burned by battery acid in the crash and had to lie across the kidnapped officers on the ride to their destination in Oklahoma. For treating Bonnie well during the drive, Clyde left them tied to a tree on the side of the road and continued. It is said that Bonnie did not receive medical attention from the plunge into the river until about a week later. Due to the severity of the burns from the battery acid, she never recovered.

Only a few months later, Bonnie and Clyde’s crime and destruction came to a final halt when they died in a shootout near Arcadia, Louisiana.

Their history and legend live on in present day Wellington. The Collingsworth County Museum has a display with a glove of Bonnie’s and two magazine clips from Clyde’s automatic rifle which were both found in the river by locals. They also have newspaper articles recounting the action. The 1933 maroon Ford V8 Clyde was driving was pulled from the river and eventually sold to a local family. The car could be seen around town for several years following the incident.

Discover more details of their plunge in a soon to be released documentary entitled “The Bridge – a piece of Collingsworth County History,” on YouTube.