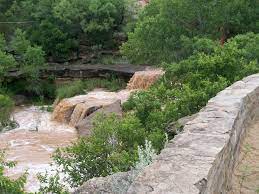 Staging the “perfect” picnic involves careful planning. One can certainly enjoy takeout at a local park, but a really good picnic demands an “excursion”!

Traditionally, a relaxing outdoor meal, surrounded by Mother Nature requires 1) a country setting; 2) cool shade; and 3)flowing water. There are countless places in Texas for picnics that include that third element of rivers, lakes, beaches and streams flowing through dense forests, but where can you find an idyllic “picnic spot” in the wide-opened spaces of West Texas?

For residents of the South Plains, the answer is simple: the “#1 Place for a Country Picnic” is Silver Falls Park!

Silver Falls Park, the largest roadside park in Texas, is located where White River, a tributary of the Brazos River, cascades “under” U.S. Highway 82, five miles east of Crosbyton, Texas.

Driving to the park is an adventure into itself. Along the short journey, the topography abruptly changes as the legendary Plains “flatlands” come to an abrupt halt at the edge of the Llano Estacado escarpment, known locally as “The Caprock.”

As the roadway descends to Silver Falls Park, the vista opens to reveal the breathtaking-beauty of Blanco Canyon. Many travelers miss an important geological feature of the canyon: a broad band of white caliche (gypsum rock) rings the canyon walls, hence “Blanco” Canyon and “White” River.

In 1935, the “old swimming hole” in Crosby County became a Texas Roadside Park under President Franklin D. Roosevelt’s Work Project Administration. Local materials were used in the construction of picnic tables, restrooms, and retaining walls that overlook the falls. Sturdy walkways and stairs brought visitors down the steep slopes to the river.

Seventy years later (2004), Silver Falls underwent a $2.7 million renovation by the Texas Department of Transportation. “Everything” was refurbished! Wi-Fi services and a storm shelter were added. Following completion, officials reported a dramatic increase in park visitors.

Over the years, expanded irrigation for farming has diminished the springs that feed the river. Yet, heavy storm runoff can quickly change the typically dry riverbed into a raging torrent, making for spectacular action of the waterfalls.

Google searches describe Silver Falls (33°40′ N, 101°10′ W) as “A step above a road side park,” and “one of the finest roadside park in Texas.” Silver Falls is also an important historic site with several Historical Markers nearby.

Europeans first visited Silver Falls in 1541 when Spanish Conquistadors, under Francisco Coronado, camped nearby on their return to New Mexico. For hundreds of years, Native Americans favored Blanco Canyon for camping, hunting, and trading with Comancheros from New Mexico.

During the Red River War in the late-1870s, the U.S. Calvary commanded by Col. Ranald Mackenzie patrolled Blanco Canyon in their conquest with the Comanche. Important battles occurred in the canyon.

Hank Smith built the area’s first home in Blanco Canyon in 1878, and with the arrival of cowboys and cattle, Silver Falls became part of the Two Buckle Ranch. Farmers and town builders soon followed. In the 1940s, Texas Tech students took the train from Lubbock to Crosbyton, then hiked to Silver Falls.

Sojourners from across the ages have been refreshed at Silver Falls. Ready for a fabulous place for a picnic in West Texas?  Let’s go to Silver Falls!