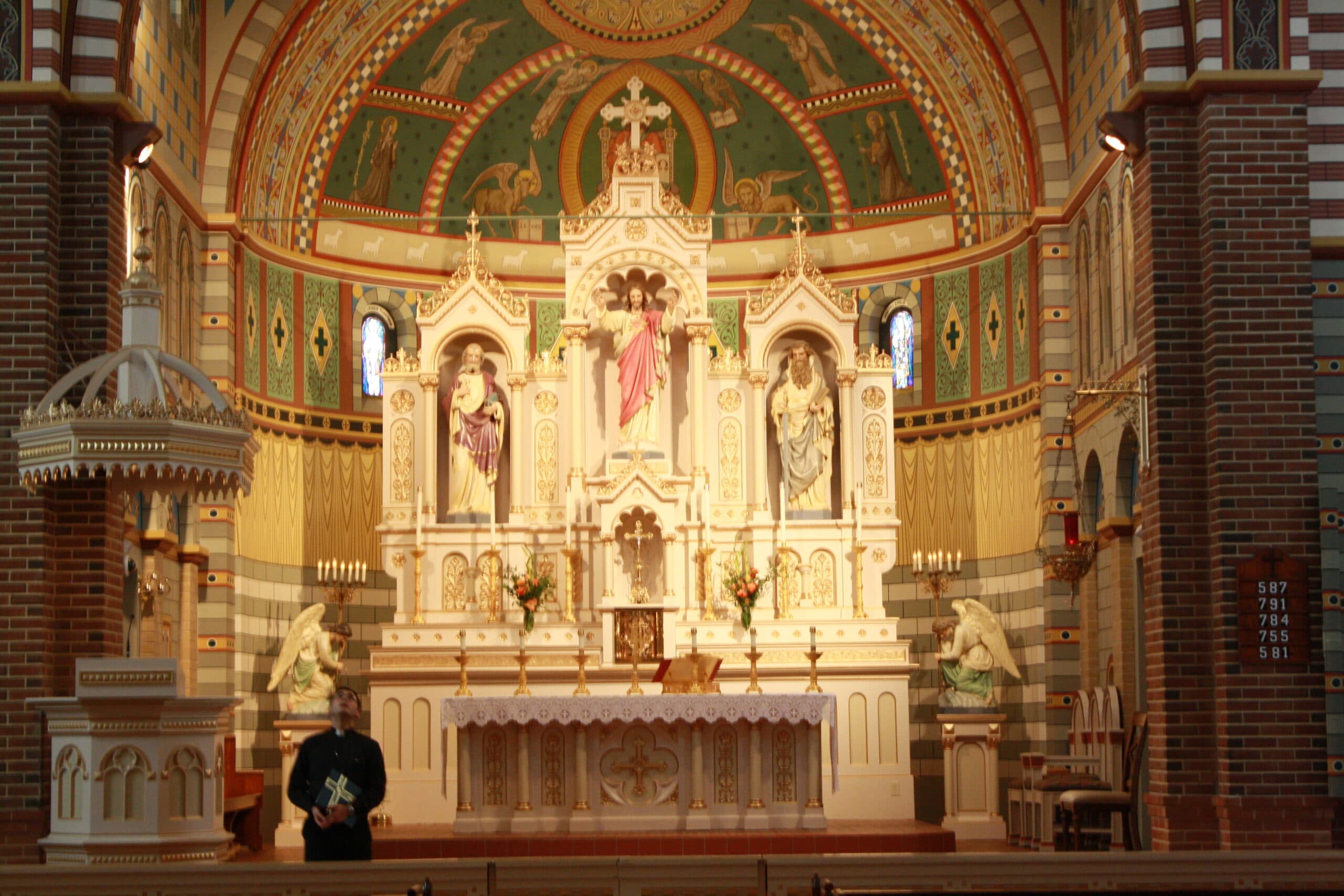 Texas has, from its earliest days of human habitation, appeared as a bright horizon to those seeking new opportunities or a second chance. This is especially true of German immigrants who came in great numbers in the nineteenth century to central and southeastern parts of the state. Then there were those who followed Anton Flusche to settle near the Red River. They named their town Lindsay in honor of a Gainesville judge who bankrolled their settlement and donated land for a church, a small version of which was ready for Easter 1892.

By 1899 a regular pastor, Fr. John Troxler, O.S.B., was assigned, and a much larger church was begun. The new St. Peter’s was completed in 1903. The scent of incense had barely begun to penetrate the interior when the climate of Texas, which respects neither the profound nor the profane, struck. At the end of May 1917 a tornado broadsided St Peter’s, splintering all but the apse, all three altars, and the façade and steeple.

Parishioners who’d completed one house of worship wasted little time getting another underway. Building materials were salvaged from the church and from a recent fire at the courthouse in Gainesville. With the approval of their incredulous bishop in hand, the citizens of Lindsay set about erecting the beautiful Romanesque building we see today. Whenever time could be spared from farm labors, the parishioners spent that time on rebuilding. In fall 1918, one year after the devastating tornado, the new church was finished.

Nature’s next assault was less spectacular but far more costly. Falling plaster in 2005 revealed extensive water damage from an undetected roof leak. This repair set the parish back nearly $4 million, but now St. Peter’s radiates inspiration. In its painted ceilings and walls, its radiant stained glass windows, its statuary and its majestic high altar, one can readily sense an evocation of the divine in artistic perfection.

The Painted Churches in the Schulenburg area are justly famous for their artwork, and St. Peter’s rightly deserves inclusion in that constellation. “Painted” churches refers to those houses of worship built primarily by Czech and German immigrants in the 1830s through the early 1900s. With limited resources, these early settlers designed and painted the walls, altars and arches in colorful patterns and images, which reminded them of the ornate Gothic churches of their homelands. At St. Peter’s, most of the original painting was done by Swiss artist Friedolin Fuchs; Dr. Matthias Zell painted four panels depicting St. Benedict and St. Boniface. For the most recent renovation, Darrel Mayo created stencils from the original work to execute exact copies of the originals.

But at St. Peter’s, the church building is only part of a whole. A rather surprising feature of the layout is the presence of several small chapels built and maintained by individual families. The following Four Wayside Chapels were all built around 1913: the Chapel of Holy Agony; the Ecce Homo Chapel; the Dolorous Chapel; and the Holy Sepulchre Chapel. On the Feast of Corpus Christi, it’s tradition for the entire parish to participate in a procession to each of the chapels, which are opened and decorated with candles and flowers.

As in the old countries, Lindsay seems to cluster about St. Peter’s large brick plaza. The descendants of many of the original families are still seen in the pews on Sundays and Holy Days. St. Peter’s Church isn’t a museum but the heart of a vibrant Texas community. “This is a community very proud of its heritage,” pastor Fr. Matthew Tatyrek says, “and striving to preserve its faith.”

Timothy Phillips is a semi-retired clinical scientist and living historian from Taylor County. Paul Beckling makes his living as a software engineer and enjoys history and photography.