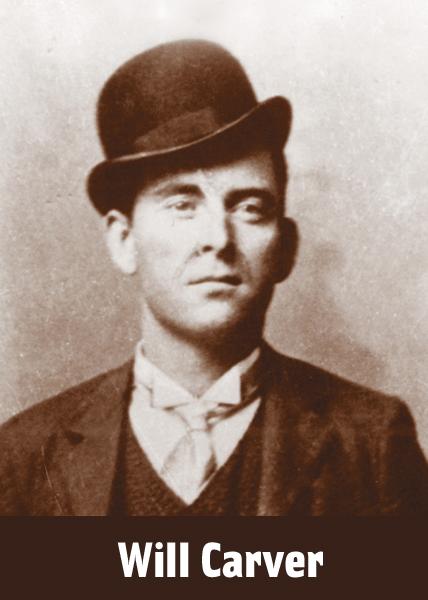 Ever heard of the Wild Bunch? Sundance Kid? Butch Cassidy? In one of the most famous outlaw photos every taken, is also one of Sonora’s claims to fame: Will Carver (top left), who died in a hail of bullets in downtown Sonora, Texas, while casing the First National Bank of Sonora in 1901.

Born in 1868, Carver was said to have been a “good looking, quiet, nice boy.” In 1880, young Will set out to become a cowboy with his uncle Dick, who had already spent time in the state penitentiary. In 1889, they joined the crew on the Sixes Ranch west of Sonora. There he met those who would change his fate: the Kilpatrick Brothers, the Ketchum Brothers and the love of his life, Viana Byler, a 17-year-old from Dove Creek.

Viana married Will in February 1892 and soon become pregnant. In July 1892, she died of complications of the pregnancy, sending the broken-hearted Will Carver to a life of crime.

Will headed west and in 1899, held up the St. James Hotel in Cimarron, New Mexico. Escaping with $50,000 and a posse in pursuit, Will and his accomplices ended up in a gunfight with law enforcement killing a sheriff and wounding deputies. Sources say Will may have already left the gunfight, but he was already branded an outlaw and murderer.

He joined up with Harry Longabaugh (alias Sundance Kid) and Harvey Logan (alias Kid Curry) and robbed the Winnemucca National Bank in Nevada. By November 1900, the Wild Bunch was together again in Fort Worth, the scene of the famous photograph, decked out in their Sunday Best. Ben Kilpatrick, Sundance, Robert Parker (alias Butch Cassidy), Kid Curry and Will sealed their fate by having the studio photo taken. It led to their demise as a Wells Fargo detective saw it and sent it to law enforcement all over the southwest.

Travelling to Colorado, Idaho, and back to Fort Worth, Carver, Logan and some newly found brides recovered some of the bank loot and went on a spending spree…then a killing spree around West Texas. Sutton County Sheriff Lige Briant was notified and recognized Will from the famous photo and the Sixes Ranch, where, ironically, the gang was hiding out.

On a fateful evening in April 1901, Will, Harvey and the Kilpatrick brothers cased the bank, hit a few of the local saloons, and were quickly recognized by Sheriff Briant and his posse. Will reached for his gun, but never fired before being shot by deputies. He died in the Sutton County Jail and was laid out for the public to view in the Sutton County Courthouse. He was buried in an unmarked grave in the Sonora Cemetery, which was later marked by a mysterious veiled woman with a stone which says only “April 2, 1901.” Rumors still fly about where the rest of the more than $80,000 loot might be still hidden.

The Ice House Museum and Historic Jail in downtown Sonora are open to the public Wednesdays through Saturdays where you can see the gun that killed Will Carver, the bed he laid on to die and hear more about his life and death.

A 5th generation Sutton County resident and an Attorney at Law in Sonora, Tammy Fisher also serves as president of the Sutton County Historical Society.