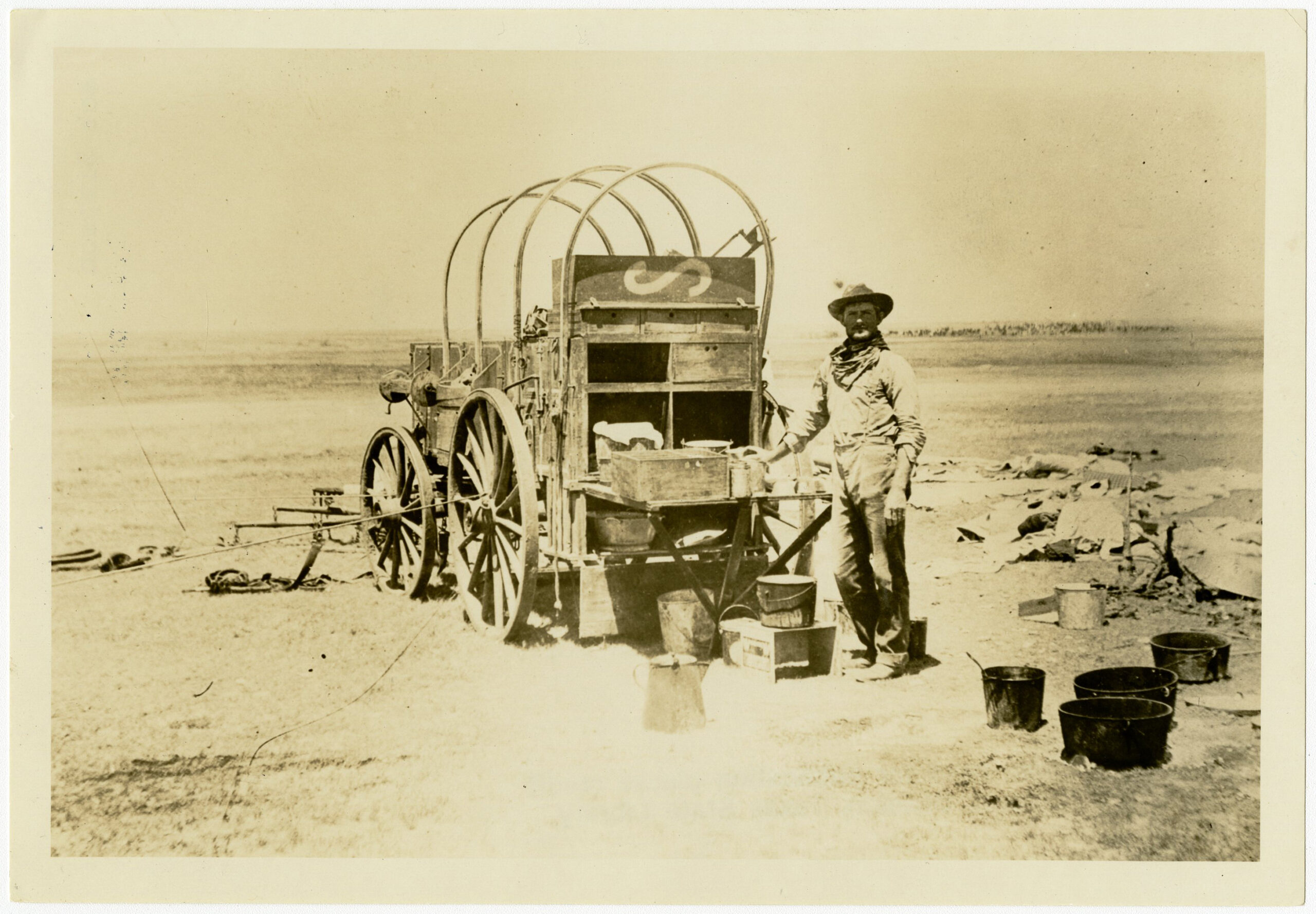 Slaughter Ranch: Bob Simpson standing beside chuck wagon from which he prepared meals for trail drivers on the Long S Ranch, about 1900-1920. | Courtesy TSLAC
0 Shares
0

As the official repository for the records of the government, the Texas State Archives are robust in materials documenting of the western heritage of the state—and before that, the Republic, Mexican state, and Spanish colony. With millions of collection items, including documents, correspondence, photographs, and artifacts, from early 20th century spurs with intricate leatherwork to 18th century Spanish census records to state tourism photographs from the last few decades—there is almost as much for a researcher to explore as there are acres in Texas!

Several manuscript collections include fascinating photographs of cowboys at work on the range, such as the Richard Niles Graham collection, spanning 1846 to 1958. The Grahams were prominent members of Texas business and society in Austin. The collection sheds light on the family’s history, social activities, interests, and business transactions, as well as including a large cache of memorabilia collected by the Graham family over the course of their lives. Richard Niles Graham also compiled a large collection of photographs that speak to his interests and document the activities of himself and his family, including 855 photographs, several of which document late early 20th century ranching, framing, and cowboy life.

Another collection providing a window into Texas’ western heritage through photographs is the Owen Wister collection, which consists of 115 images taken by Wister during his trip to Texas in 1893. Prominent in the collection are Texas ranch scenes from the Savage, Colton and Conover ranches, as well as the San Antonio missions of Concepción de Acuña and San José. Subjects covered include cowboys, horses, polo ponies, polo players and games, stables, architecture, the San Fernando cathedral in San Antonio, towns, residents, and landscape.

A government record collection that is also a particularly rich source of related visual research material is the Texas Tourist Development Agency (TTDA) Photographs and Audiovisual Materials collection. The TTDA worked to increase the state’s share of the national tourist market using a variety of mass media. The materials include photographic color slides, transparencies, negatives, photographic prints, videotapes, motion picture films, and audio tapes dating from 1964 to 1997. This collection documents the state government’s efforts to promote Texas ranching, farming, food, and related cultural activities throughout the late 20th century, preserving through photo and video the work of agricultural workers, producers, promoters, cooks, and others. Most Texans will recognize these more recent and familiar but quintessential images of cowboys, chili cook-offs, fishing boats, peach queens, pit masters, and more—from all corners of the state.

The State Archives’ Artifacts collection consists of nearly 600 objects relating to Texas history. Spanning the Cretaceous Period to the 21st century, artifacts date primarily from 1860 to 1970. This wide assortment of items helps directly document in material form the lives of those who have resided in Texas over the centuries, and many artifacts reflect our Western legacy—the State Archives preserves cow bells, bridles, branding irons, clothing, spurs, cookery, ox-yokes, saddles, arrowheads, china, ceramics, and more. Every artifact in the collection has been photographed and is available to view online.

These and millions more records can be accessed, browsed, and downloaded for free in the Texas Digital Archive at www.tsl.texas.gov/texasdigitalarchive.

Researchers and the public are also invited to visit in person at the Lorenzo de Zavala State Archives and Library Building in Austin, next door to the Capitol. View the six flags flown over Texas, our six Texas seal mosaics, the panoramic Texas history mural in our lobby, and our Texas history exhibits. Open 8:00 a.m. to 5:00 p.m., Monday through Friday (research hours 9:00 a.m. – 4:00 p.m.). Beginning in 2022, reading rooms are also open the second Saturday of each month from 9:00 a.m. – 4:00 p.m.