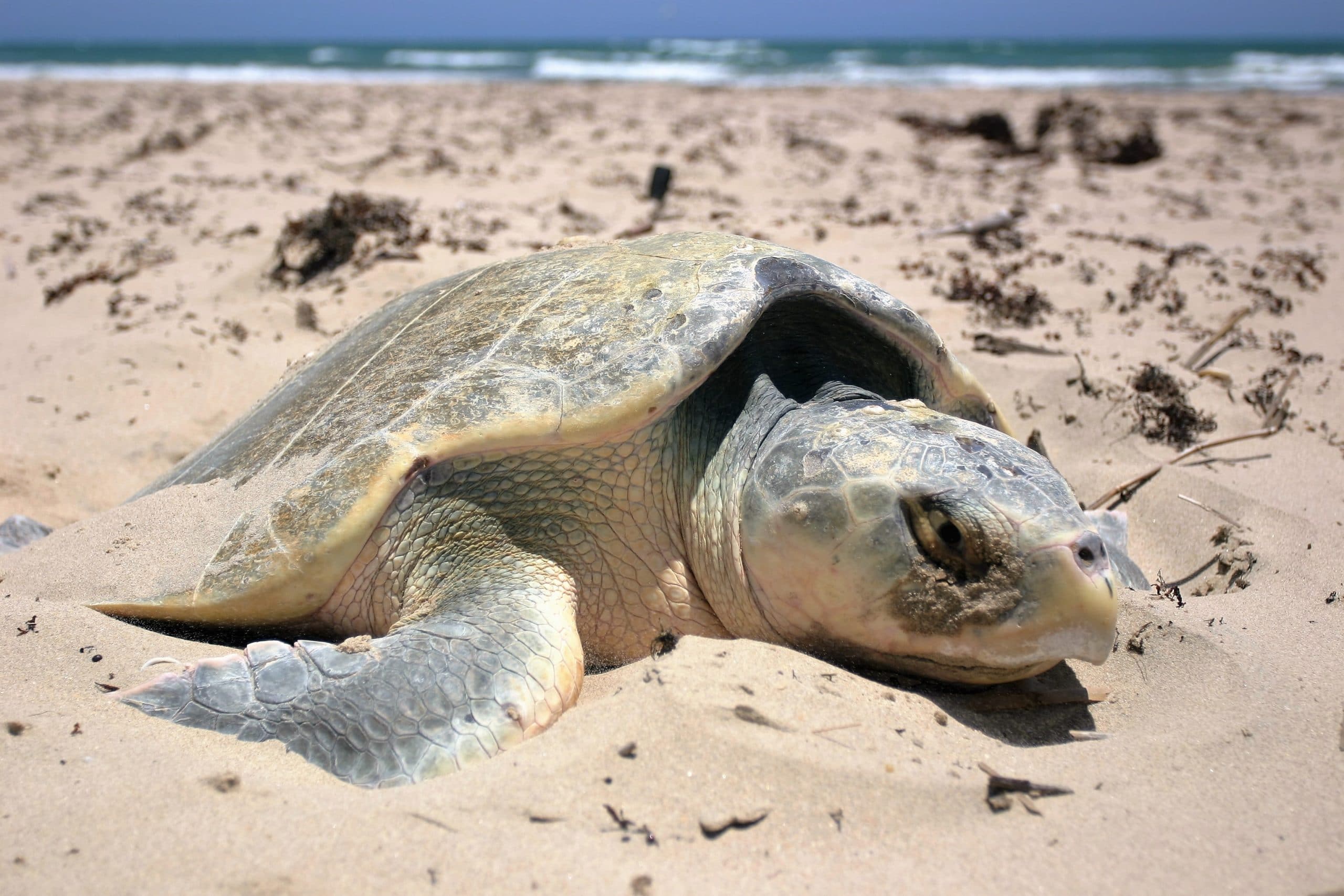 In 2013, science teacher Katie Blaser led the “Green Team” of fourth graders at Galveston’s Oppe Elementary School on a successful quest to have the Kemp’s ridley sea turtle named the Official State Sea Turtle of Texas. As an after-school group comprised of 24 students that generally conducted community recycling drives and beach cleanup projects, the Green Team decided the endangered turtle species needed help and that the state needed an official sea turtle. Working with elected officials, they were instrumental in the unanimous passage of House Concurrent Resolution (HCR31) which designated the Kemp’s ridley sea turtle as the official state sea turtle of Texas; Governor Perry signed HCR31 on May 10, 2013.

According to the National Park Service (NPS), “Texas is the only state in the U.S. where Kemp’s ridleys are native, with nesting records dating back to the 1940s,” thereby making the Kemp ridley sea turtles an authentic Texas turtle!

Kemp’s ridleys are among the smallest sea turtles, reaching only about 2 feet in shell length and weighing up to 100 pounds. The turtles are named “Kemp’s” after Richard Kemp, a Florida fisherman who helped discover and study the turtle but no one is sure why they are called “ridley”. Adults are found primarily in the Gulf of Mexico but juveniles have been found in the Atlantic Ocean as far north as Nova Scotia and sometimes along the eastern North Atlantic coast. When hatched, Kemp’s ridley sea turtles are almost entirely a dark purple or charcoal gray. As they mature, the turtles change color so their backs are an olive green and their underside is yellow. (Photo right: Kemp’s ridley sea turtles make a mad dash for the surf when hatched on the beach.  Conservation efforts to save the species has led to gathering eggs, incubating, then releasing as well. Courtesy of the NPS)

Once abundant in the Gulf of Mexico, the U.S. federal government classified the Kemps’ ridley sea turtles as an endangered species in 1970 and it is still the most endangered species of sea turtles. There is success in that nesting females once numbered below 300 but these numbers have grown to reach nearly 9,000. Additionally, after decades of work, the number of nests has grown from only 702 in 1985 to nearly 27,000. Beyond natural predators, the greatest threats to Kemp’s ridley have been poaching and commercial fishing. (Photo left: The Kemp’s ridley is the only sea turtle with an almost circular carapace (upper shell). Courtesy of the NPS)

Bringing attention to the Kemp’s ridley sea turtle and the conservation of this species has been, and is, a labor of love for many. Two notable conservationists are Ila Fox Loetscher, the “Sea Turtle Lady of South Padre Island,” and Dr. Donna Shaver of the National Park Service (see our Authentic Person article).

Loetscher’s love for Kemp’s ridley started after volunteering in Rancho Nuevo, Mexico. She fell in love with sea turtles and began caring for them in her South Padre Island home. She drew so many curious visitors that in 1977 she formed Sea Turtle, Inc. (STI) . This all-volunteer non-profit organization assisted her in education efforts and the rehabilitation of injured sea turtles.

Today, a growing list of volunteers along with full and part-time staff continue education, conservation and rehabilitation efforts. In 2018 STI opened a $6 million education facility and is currently raising funds to remodel the original location into a world class sea turtle hospital.

Since the 1970s, National Park Service staff and volunteers have worked diligently to help the Kemp ridley sea turtle’s recovery. Led by Dr. Donna Shaver, the Division of Sea Turtle Science and Recovery at Padre Island National Seashore is the only division of its kind in the entire National Park system.

The Kemp’s ridley sea turtle is one of the most iconic and popular creatures found at Padre Island National Seashore and along Gulf Coast shorelines. Texans young and old alike invest in educational and conservation efforts for this symbol of the Lone Star State.