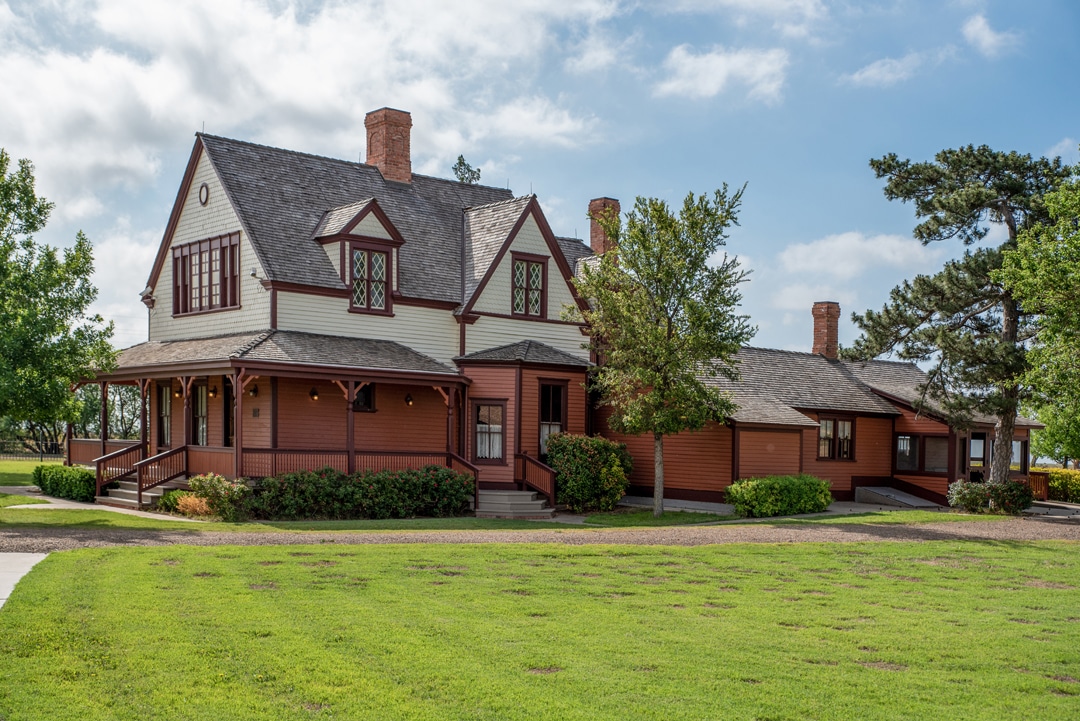 Monti Goodin sits in the kitchen of her home located just down the road from Charles Goodnight’s historic ranch house where the Goodnight Under the Stars event takes place each August. “This house was built in 1922 by Colonel Goodnight’s men,” she says. “If you look out the rear windows you can see Palo Duro where he found his buffalo.”

Surrounded by numerous awards, Goodin talks about her work in historic preservation. Largely due to her efforts as chairperson of the Armstrong County Museum, Goodnight’s house was restored in 2012 and the J. Evetts Haley Visitor and Education Center was built in 2013. “My father was born in Goodnight’s house where his mother was a housekeeper,” Goodin says. “In fact, I was also born in that same house but that was after Colonel Goodnight was gone.”

Goodin and her late husband, Emery, have lived on this land – originally given to her father, Cleo Hubbard, who was the last foreman of Goodnight’s ranch – for most of their lives.

The Y Bar Ranch is on land originally used as the west pasture for Goodnight’s buffalo where he raised genetically pure remnants of the great Southern bison herd that once roamed here.

Because of her connection to this land and to the Goodnights, people still contact Goodin about the legacy of Charles and Mary Ann “Molly” Goodnight. “Recently I had a man show up here at the house who wanted to visit about his time at the Goodnight ranch when he was a child,” she recalled. “His father had been the foreman before my father got the job and he remembered riding in the Model T the colonel bought.”

According to Goodin, the man said when Goodnight was learning to drive the car, he would let the kids at the ranch pile in and even stand on the running boards as he drove up and down the lane. Stories like this are the subject of a book Goodin is writing about her experiences living at the Goodnight Ranch as a young girl.

Goodin already has finished a children’s book about Old Blue, the legendary longhorn that led Goodnight’s longhorn herds up the cattle trails with a bell around its neck. Earlier she was able to realize a lifelong dream by writing a musical about the life of Charles and Molly Goodnight that premiered at the Van Ellis Theater on the campus of Hardin-Simmons University in Abilene.

Seeing the transfer of the Goodnight Ranch House and property into the care of the Texas Historical Commission (THC) was the culmination of another dream. The Armstrong County Museum had wanted to find a caretaker for the property, which was in a state of deterioration when it was given to the museum in 2005. Since that time the museum raised over $3 million to restore the house, build the visitor center and operate the site.

At the most recent Goodnight Under the Stars event, THC Commissioner Pete Peterson spoke to the audience about ongoing work at the house, including the renovation of the chimneys, the placement of signage and a request to the Texas Legislature for five full-time employees to run the site.

All this began with Goodin’s labor of love to restore the house she remembered as a young girl. In a 2012 interview with Texas Heritage magazine, Goodin was asked why preserving historic sites such as the Goodnight House mattered. Her response is both personal and universal: “We share a strong belief that a person needs to know about their roots. When the physical evidence of history is demolished, what the buildings represent is gone forever. By visiting historic sites people are connected to their past, offering each generation a sense of belonging to that place and those particular people.”

Goodin says she is proud of all the awards, but perhaps proudest that her daughter and son-in-law, Elizabeth and David Magar, have returned to live in a house next door and carry on the work she loves. David is the current chairman of the Armstrong County Museum board. In that sense, the story of Charles Goodnight’s house and its restoration has come full circle.