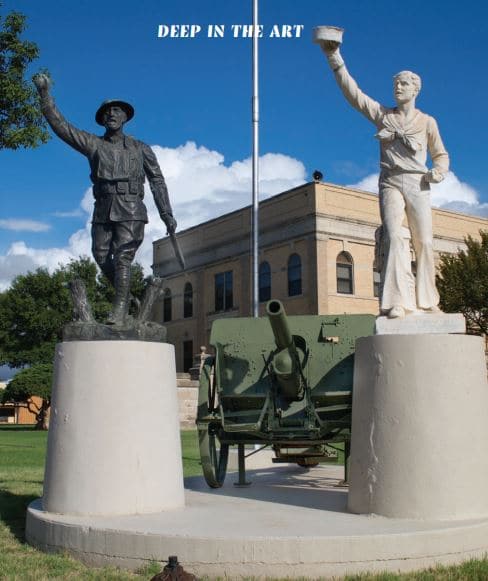 On any given day, “The Spirit of the American Doughboy,” by Ernest M. Viquesney, is a memorial statue that can be found in multiple locations around the state. So if at first glance the structure may seem familiar, that may be because you’ve seen it elsewhere.

The statue was first conceptualized in 1920, two years after the end of World War I, and features a lone U.S. soldier dressed in an Army uniform holding a rifle with a bayonet in his left hand while brandishing a grenade in his right, positioning himself similarly to the iconic pose of the Statue of Liberty. The soldier’s stern, triumphant expression embodies the American spirit and perseverance in the war.

The Doughboy memorials, all featuring the statue and a stone or brick base, can be found in 39 U.S. states. They sit in town squares, in cemeteries, in front of federal buildings and in parks. There are about 145 of them — nine in Texas — and they all look familiar.

In North Texas, you can find the famed statue in Crowell, Fort Worth, Vernon and Wichita Falls. (The Doughboy at Crowell is paired with the only known stone version of Viquesney’s “The Spirit of the American Navy.”)

The statue also resides in the Panhandle town of Canyon as well as Groesbeck and New Braunfels in Central Texas, along with Lufkin in East Texas and Sinton in South Texas. There’s also a debated location in Texarkana, situated on a private gravesite memorial that has a stone Doughboy. Its unsigned nature means that it may have been a collaboration with Viquesney and another artist, but that remains unknown.

But why would this specific statue design be scattered all around the state and the nation? The reason is the “Spirit of the American Doughboy” is among the first mass-produced memorial statues in existence.

Viquesney, an Indiana native, served in the Spanish-American War. He also grew up wanting to be an artist, although he was warned by his father that he’d die poor if he pursued that career path. Viquesney, however, proved him wrong. He started working for a memorial company in Americus, Ga., where he created the marble headstones for the U.S. Civil War soldiers buried in Andersonville National Cemetery. Though the headstones brought him recognition, Viquesney’s real claim to fame occurred following WWI.

He wasted no time in starting his Doughboy sculpture, beginning work on it immediately once the war ended in 1918. He had several returning soldiers pose for him while wearing their full combat gear. While he could have had them stand simply, with both arms down, Viquesney wanted a triumphant pose to be the legacy of the war.

In 1920, Viquesney applied for a patent for his design. He pioneered the idea of a mass-produced memorial to bypass the sky-high expenses, complicated approval process and time taken to create a one-ofa-kind memorial. Knowing that Americans across the nation would want to memorialize the Great War, he created and patented a mold either pressed from copper or cast from zinc then coated with bronze. This made the statue’s production time quicker, cheaper to make and easily transportable to towns and cities around the country due to its lighter weight compared with traditional marble statues. The price of one “Spirit of the American Doughboy” statue was $1,500 — roughly $20,000 in today’s market.

Viquesney placed ads in newspapers and magazines around the country for his Doughboy sculpture. In them, he claimed to have sold 300 of the full, 7-foot-tall memorial sculptures, and that there was at least one in every state (48 at the time). While these claims haven’t been substantiated, the Doughboy iconography was so popular that plenty of small towns snapped them up. The popularity soared, so much so that Viquesney created smaller versions of the sculpture, as well as one that served as a lamp base, making it possible for veterans or others to place a Doughboy in their homes.

This year, on Nov. 11, the U.S. marks the 100th anniversary of the day Germany formally surrendered, thus ending the fighting in WWI. Doughboy statues are a reminder to honor those who risked their lives to defend our country and support other nations 100 years ago.