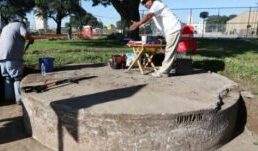 Picture in your mind a watering hole … people gathered around, laughing, chatting and enjoying each other’s company. The water is cold and refreshing and would relieve an hot Texas day. That’s exactly what those who lived in the Waco area known as Calle Dos felt from the 1920s to the 1960s as they gathered around La Pila, which, translated, means “the basin.”

When the neighborhood was leveled during a time of urban renewal, this centerpiece of social life was almost lost. But with the work of some local archeologists, a community school and the grit of Waco city council member Alice Rodriguez, La pile was rediscovered and has become an anchor of Hispanic heritage in Waco.

“My aunt used to live in a shotgun house right across from La Pila,” Rodriguez says. “Our families would go to visit, and my cousins used to throw me into the fountain when we played.” Rodriguez says there were lots of fountains in the area since many folks didn’t have indoor plumbing. Fountains were thus used for cooking, fresh drinking water and bathing.

A conversation about times past spurred an impromptu visit to the area. “We went over,” Rodriguez says, “to look at the area that was our home, our community.” She and Louis Garcia, who is now the director of the Waco Hispanic Museum, recall the rich culture of the neighborhood and how different this community was.

In the 19th and early 20th centuries, the neighborhood was home to a growing Hispanic population, from landowners like Tomás de la Vega to the thousands of Mexicans who were brought to the area to work on Rich Field Air Force Base, where WWI pilots were trained.

Both Rodriguez and Garcia say this history, however, wasn’t being told about Hispanic contributions to Waco, and the idea of the Waco Hispanic Museum was born. The museum opened in 2016.

“I started the museum because there was never mention of any Hispanic people, their work or organizations that built this city,” Rodriguez says. “I wanted our kids to know there were Hispanic efforts and work that went into making this city what it is. No one ever mentions us.”

Community leaders put words into action and began devising a plan to share stories and history of Hispanic people in Waco. The unearthing of La Pila is one of their biggest projects. “It was buried by urban renewal, as was the Calle Dos area in the 1950s and ’60s,” Garcia says. “Our goal is to one day have a small park at the fountain area where the story and history of this area can be told. Today, the museum houses artifacts that allow a look back at Waco history that many don’t get to see — or even know to look for.”

Andrea is executive director of the Texas Brazos Trail Region, and serves as Mayor Pro Tem, District 1, for the City of Waco.