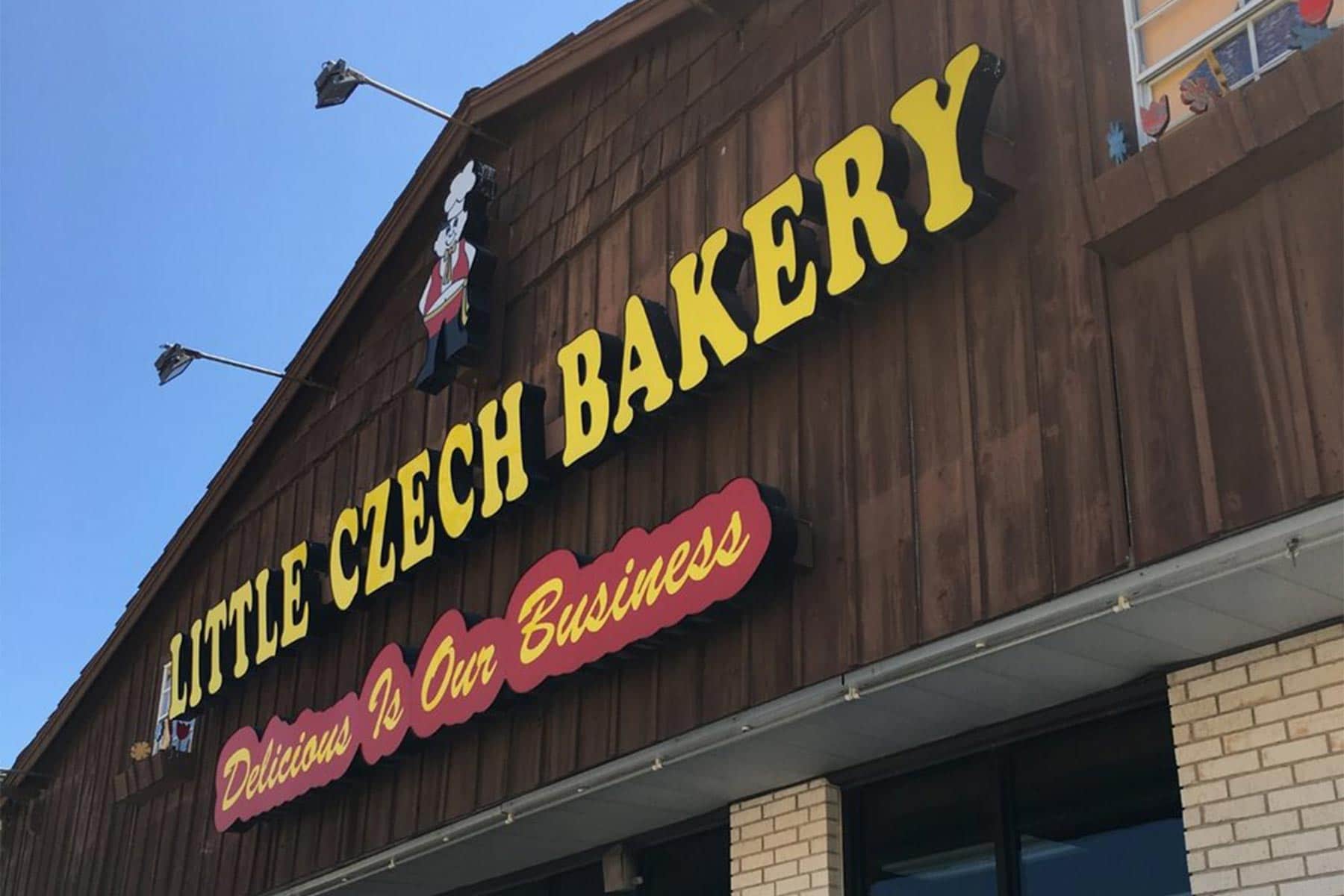 Texas is well known for its diverse cultures and ethnic backgrounds, so travelers can find a cornucopia of cuisines and dining choices across the state. One of the best representations of the Czech culture originating in Eastern Europe is the Czech Stop and Little Czech Bakery in West.

From its beginnings in 1983, when a former marine took over a chain convenience store twenty miles north of Waco, Czech Stop has become a roadside institution. It’s a magnet to pull travelers off of a busy Interstate 35 and spend some time in the community that has one of the largest concentrations of Czech Texans, according to the U.S. Census. When the town of West was incorporated in 1892, Czech immigrants formed the majority of the population, and that culture dominates the area to this day in terms of surnames and—fortunately—food.

William S. “Bill” Polk, who had studied at Texas Tech and wanted to be a chef, founded Czech Stop as a convenience store, its focus originally fuel and snacks.

But one of the items he carried in the store was a Czech pastry known as a kolache, which he purchased from a local bakery, Kolache Kitchen. After a couple of years and the popularity of the Czech delicacy, Polk saw the potential for adding his own bakery as part of the Czech Stop.

“We started with one oven with maybe three shelves,” recalled Barbara Schissler, one of the first employees and today the president and CEO. “Today, the ovens operate twenty-four hours a day, other than maybe an hour when there is a shift change.”

In 1983, Schissler said, Czech Stop had nine to twelve staff; today it is one of the largest employers in West, with more than 100 workers keeping Czech Stop open around the clock. The menu has also expanded from kolaches and bread to a wide array of baked goods, desserts, and sandwiches. “Everything is from scratch and fresh,” Schissler said. “We make our own jellies; we use only the best meats and ingredients of the highest quality.”

Schissler believes the Czech Stop has the advantage of “being a mom-and-pop and a single store, versus a 7-Eleven. They stock all their stores with the same thing, and we keep changing our menu and improving our recipes.”

As customers peer through the bakery’s imposing glass-front display cases, at times, the newbies might have some confusion as to what is and is not a kolache. It’s really quite simple, despite the misnomer that’s elsewhere been applied to pigs-in-a-blanket-type sausage rolls: the pastries with the fruit and/or cream cheese in the center are kolaches.  The rolls stuffed with meats and cheeses would be called a klobásník, another Czech delicacy.

“The kolaches with cream cheese are our most popular item,” Schissler said. “And the old-timers don’t like people calling a klobásník a kolache.”

Whatever you call them, they are all delicious. They have made Czech Stop famous not only in Texas but nationally, with mentions in the New York Times, the Los Angeles Times, and even a documentary, “Kolache, TX,” that can be viewed on Vimeo.

William “Bill” Polk, age 85, passed away Saturday, May 2, 2020, according to an obituary published in the Waco Tribune-Herald.

Bill was born November 21, 1934, in San Angelo, the son of William and Bonnie (Black) Polk. He graduated from Lubbock High School and attended Texas Tech in Lubbock, where he studied to become a chef. Bill proudly served his country in the United States Marines. Bill enjoyed cooking, traveling, classical music, visiting with all of his Czech family and friends, and was always ready for “Happy Hour.” He was a devoted hard worker and was very proud of all of his accomplishments over the years in opening up the Czech Stop and Little Czech Bakery in West which is known as a famous stop for all of the I-35 corridor. Bill was very proud of his workers and cared about his Czech Stop family. He was a member of Waco Shriners, West Kiwanis, Waco Masonic Lodge #92, Waco Symphony, and the Retail Bakers Association. He was a big part of helping to start the first Westfest and starting a scholarship fund at Texas Tech.