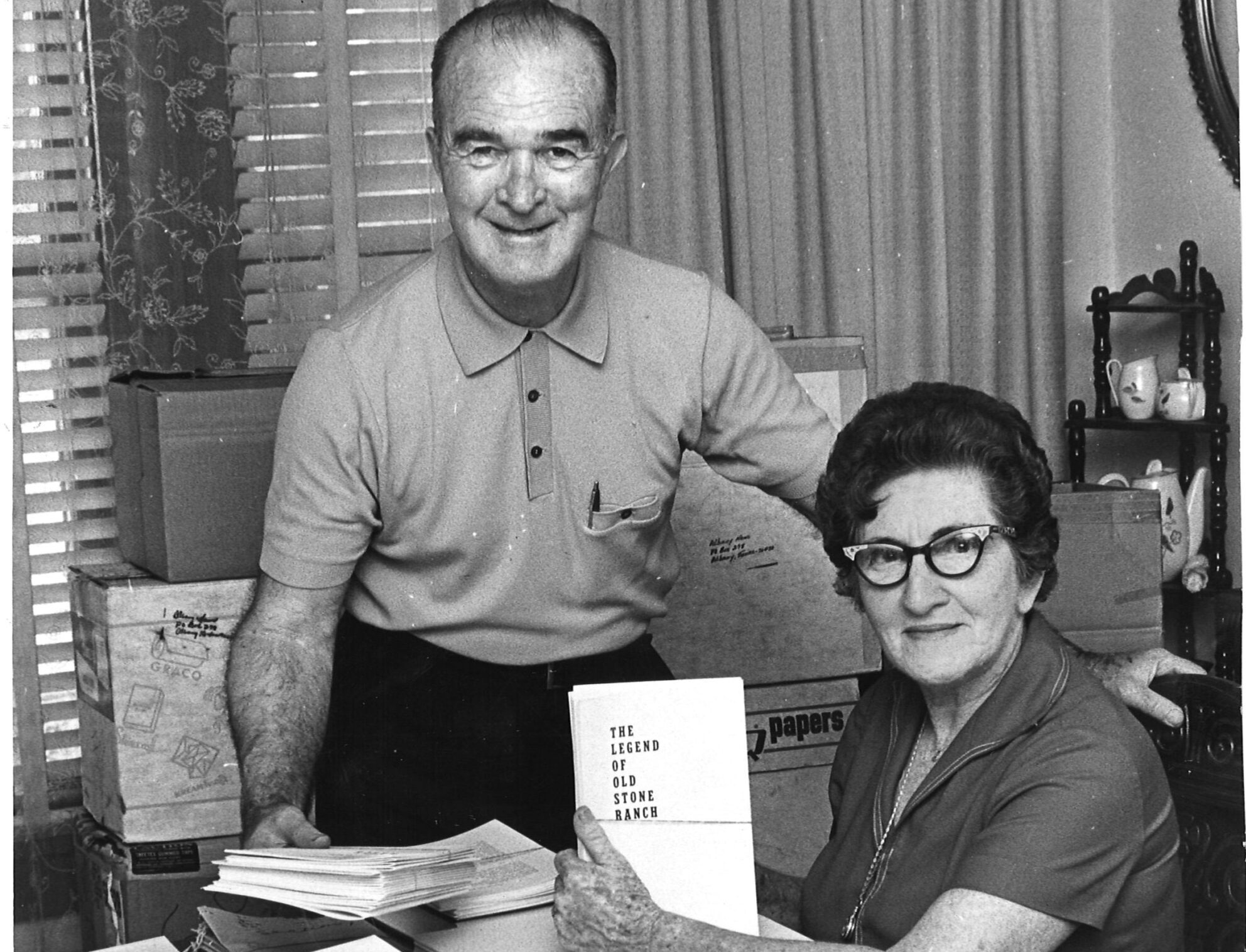 “. . . On a high hill overlooking
Old Stone Ranch, a cemetery
With a single grave stands vigil. . . “

And so begins part IX of chapter 35 of The Legend of Old Stone Ranch: A Saga of Texas Borderlands, which was adopted August 7, 1969, as the official epic poem of the State of Texas when thenGovernor Preston Smith signed Senate Concurrent Resolution Number 8.

The haunting passage was inspired by a graveyard scene that the poem’s author, John Worth Cloud, came across while researching Shackelford County Sketches by Don H. Biggers. That led to Cloud’s taking on the daunting challenge of writing a poem of epic proportions. The Legend of Old Stone Ranch, like the Swedish Kalevala, is written in unrhymed eight-syllable verse and tells the story of a specific geographic area.

In Albany, Texas, seat of Shackelford County, where Cloud had moved in 1953, the day the resolution was signed was a memorable one for just about everyone in the community.

“They were really excited about it,” recalled longtime Albany resident, rancher, and history buff Clifford Teinert.

When Cloud wrote the poem – a book weighing in at 390 pages – he was working at the Albany News as a writer and Linotype operator. His wife, Josie Herrington Cloud, was a schoolteacher. Cloud died in 1990 in a Denton nursing home, and his wife died in 2002. Both are buried in Huntington Cemetery in Angelina County, birthplace of Josie Cloud.

The Senate resolution commends poet Cloud “for his distinguished accomplishment in delineating the glorious country that is Texas and interlacing romance and description with the charming legends of American Indians to make the Legend of Old Stone Ranch a true Texas saga.”

The “old stone ranch” cited in the title still stands in its restored state in southwestern Throckmorton County, which adjoins Shackelford County to the north. The late Hardin-Simmons University English professor Lawrence Clayton wrote an entry about the ranch for The Handbook of Texas online. The ranch was founded in 1855 by Capt. Newton C. Givens, who at the time was commander of a company of the Second United States Dragoons, stationed at nearby Camp Cooper. The ranch history is intertwined with the West Central Texas region of the state. Clayton wrote that in 1866 the Barber Watkins Reynolds family and ranch crew moved there. Their daughter, Sallie Reynolds, who married John Alexander Matthews in 1876, left a record of the ranch in her book Interwoven. In 1879, a fire caused the stones to tumble in the ranch house. The property was transferred from the Givens estate to John H. Hancock of Austin and then sold to the Reynolds and Matthews families in 1880. By the 1980s, it had become a part of the famed Lambshead Ranch, founded by John Alexander Matthews.

Clayton wrote that in 1983, Watt Matthews began reconstruction of the ranch structures, following scant directions left in his mother’s book and old photographs made before the roof timbers collapsed.

John Worth Cloud’s tombstone in Huntington Cemetery notes that he was an editor, journalist, and poet. He also worked for various Texas oil companies and owned several Texas weekly newspapers from 1939 to 1950.

A year before Cloud’s poem was honored by the legislature, it was named by the Texas State Historical Survey Committee (today’s Texas Historical Commission) as “Best Historical Publication of the Year on Local or Regional History.” Copies can be found in some libraries and online.

The Legend of Old Stone Ranch: A Saga of Texas Borderlands by John Worth Cloud, with foreword by John Ben Shepperd; Limited edition privately published in Fandangleland by The Albany News, 1968 xiv, 390 pp., grey cloth-covered boards with silver lettering on the front cover and spine. Second printing by Terrill Wheeler Printing Co., 1968.