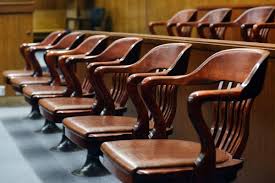 NOTE: Dr. George F. Porter, who lived from 1876-1951, was an African American educator and Dallas civil rights leader. Remembering Black Dallas member Beverly Davis and local actor Jerrold Trice researched and created this one-act monologue for a play about Dr. Porter. In this “interview,” Dr. Porter discusses what he did so that Blacks could serve on juries in Dallas County. His story should serve as an important reminder for all of us to not take for granted the rights that we presently possess.

Hello, my name is George Francis Porter. I was born in the state of Georgia on December 17, 1876 and raised by my great-grandparents, Robert and Ruth Hunter. I was blessed to attend Atlanta University and graduated in 1899. I taught for a while at Paul Quinn College in Waco, Texas. In 1901, I moved to Dallas to teach at Colored High School which was originally located at Hall and Cochran. Colored High School later moved to its current location on Routh Street and was renamed Booker T. Washington High School. I also served as President of the Dallas campus of Wiley College which was headquartered in Marshall, Texas. It was my honor to help educate a population that was not far removed from enslavement.

Although I had a passion for education, I could see clearly that my people were being denied human and civil rights under the segregated system of Jim Crow that replaced slavery. In Dallas County, Black people were being denied the right to serve on juries. How many of you have gone out of your way to avoid serving on a jury? Let me see a show of hands. Shame on you!

I became a member of the NAACP because they fought for justice, and I wanted to be a part of bringing about positive change for my people. In 1938, we devised a plan that would open the door for Blacks to serve on juries in Dallas.

Prior to that time, if a Black person received a jury summons, he or she was expected to excuse himself and never actually serve on the jury. The plan that we developed with the Dallas NAACP is that we would show up for jury service and refuse to disqualify ourselves. When I received a jury summons, I reported for service along with some of my other NAACP members, including our Dallas NAACP President Benjamin Howell, Rev. Maynard Jackson (Pastor of New Hope Baptist Church), and Rev. E. C. Estell (President of the St. John Baptist Church). By the way, I was a member of the St. James A.M.E Church. Well, we executed the plan perfectly. When I received a jury summons, my colleagues accompanied me to the central jury room. When I went the first time, I was dismissed as a juror.

This went on until the third time that I showed up. The judge had some hoodlums violently remove me from the central jury room and throw me headfirst down the courthouse steps. As a result of this treatment, I sustained an injury which caused me to go blind.

The story about my treatment went national, and when Thurgood Marshall (pictured right) heard about it, he was furious. He was working at the time as an attorney for the NAACP in New York City. He filed a complaint with the United States Justice Department and word got out that he was coming to Dallas to investigate the incident.

When the Dallas police chief heard that Thurgood Marshall was coming to town, he let it be known that Thurgood was not welcome. However, Thurgood was a smart man. This was not his first time dealing with power structures and law enforcement in the South.

Before coming to Dallas, Thurgood paid a visit to Texas Governor James Allred (pictured left) to let him know that he would be investigating my treatment and jury suppression in Dallas. Governor Allred assigned a Texas Ranger to provide protection to Thurgood. And you know it was a good thing, because as Thurgood was wrapping up his investigation here in Dallas, he was confronted by the Dallas police chief as he was leaving the Courthouse and returning to his car. The Dallas police chief pulled a gun on Thurgood and said “I’ve got you now you Black S.O.B.” As Thurgood ran to the car, the Texas Ranger sitting on the hood of the car, pointed his gun at the police chief and said, “Fella, just stay right where you are.” Who would think that the Governor of Texas would provide protection to a colored lawyer from New York City?

There were some good things that came out of the whole incident. First, Dallas was embarrassed by the negative publicity received from the whole incident. They began to open jury service to Blacks within the county. This was also done with a little encouragement from the Governor. He sent Texas Rangers to provide some oversight of the jury selection process in the central jury room. Secondly, the Dallas NAACP and the Texas NAACP, headed by A. Maceo Smith, established a great relationship with Thurgood Marshall. It would be the first of many visits he would make to Dallas to coordinate civil rights work and litigation. Thurgood won some great victories in Texas, including the Smith v. Allwright decision, which struck down whites only primaries for the Democratic Party, and the Sweat v. Painter case, which struck down the discriminatory practice of “separate but equal” in the State of Texas for higher education.

You may ask if I have any regrets about what I did to stand up for justice since it resulted in me having a permanent disability. My answer to that question is no. Even though I paid a high price, it was worth it to me to sacrifice so that my people would have the rights guaranteed in the U.S. Constitution. I do have a favor to ask of you. Embrace your duty and opportunity to perform jury service and encourage your family and friends to do likewise.

Some Kind of Normal!

Back Roads and Small Towns