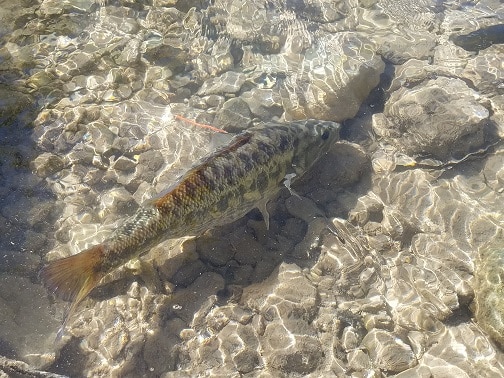 The Guadalupe is a perfect Texas icon: it’s unique, it’s strong, and it’s a survivor.

In 1989 the Guadalupe Bass (micropterus treculii) was named the official Texas State Freshwater Fish. But why would a state that boasts that “everything is bigger” select a fish that in adulthood averages around 12 inches long and one pound in weight? What makes this little fish so special?

For one, it’s unique to Texas. And it’s a powerful fish for its size.

The spunky Guadalupe Bass is a favorite for fans of fly fishing. It uses river currents to put up a fight like a fish much larger in size. It’s also found in some of the state’s most scenic and out-of-the-way places, making for a peaceful and enjoyable day of fishing.

According to Texas Parks and Wildlife, these Texas jewels of Hill Country rivers are found in the “northern and eastern Edwards Plateau, including the headwaters of the San Antonio River, the Guadalupe River above Gonzales, the Colorado River north of Austin, and portions of the Brazos River drainage.”

As with many iconic stories, there’s a bit of triumph over near tragedy. To increase sport fishing in the region of the Edwards Plateau, the Texas Parks and Wildlife Department introduced smallmouth bass into the habitat of the Guadalupe Bass beginning in the 1950s. The unintended consequence was a drastic reduction in the population of the indigenous bass due to the competition of the smallmouths and the interbreeding of Guadalupe Bass and smallmouth bass, creating a hybrid.

After working for more than 25 years to restore the endangered state fish, the department says its population is on the rise. Texas Parks and Wildlife biologists are stocking the affected areas with millions of Guadalupe Bass fingerlings on a yearly basis to outnumber the hybrid and the smallmouth.

You don’t have to be a fan of fishing to see the state fish March through April at the A. E. Wood Fish Hatchery in San Marcos.

Hatchery tours are offered each Tuesday at 2 p.m. and Friday at 10 a.m. for groups of 10 or fewer. Visitors should call ahead to make sure the Guadalupe Bass is available for viewing.

For a more abstract look at the state fish — and a great photo op to boot — head out to Kerrville to see “Lupe,” a giant Guadalupe Bass statue appropriately displayed in Louise Hays Park along the Guadalupe River. Kerrville residents contributed hundreds of handmade mosaic tiles to adorn this sculpture created by GiGi Miller. The park is a great place to stop and stretch your legs or cool off in the river — right alongside the real State Freshwater Fish of Texas.