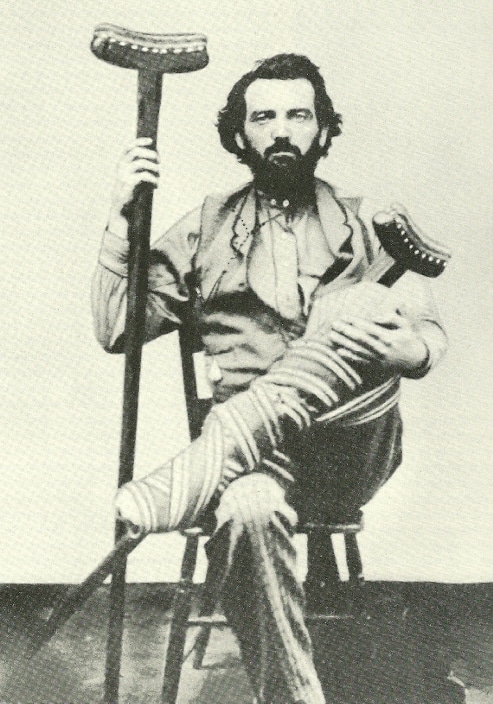 Clay Allison claimed, “I never killed a man that didn’t need it.” Known as a cattle broker and rancher, when asked what he did, Clay said, “I am a shootist.” While his life was marked with restlessness, violence, and too many outrageous stories to be properly documented, Clay did not die in a blaze of glory.

Born around 1840 in Waynesboro, Tennessee, Robert Clay Allison was the fourth of nine children. He worked on the family farm until the Civil War broke out; at the age of 21 he enlisted in the Confederate Army.  After a few short months he was medically discharged for a condition that doctors called “partly epileptic and partly maniacal,” resulting perhaps from an early childhood head injury. Some have speculated the head injury may have been the cause of his violent behavior, especially when drinking. On September 22, 1862, Allison re-enlisted and served under the Confederate General Nathan Bedford Forrest. At war’s end, he surrendered with his unit, was held as a prisoner of war and returned home.

Back in Tennessee, Allison was involved in numerous altercations before moving to Texas with his brothers Monroe and John, sister Mary, and her husband Lewis Coleman. Allison learned the basics of ranching and excelled as a cowboy. In 1866 he signed on with Oliver Loving and Charles Goodnight and was part of the crew that blazed the Goodnight-Loving Trail.  After receiving 300 head of cattle as payment from a different cattle drive, Allison homesteaded near Cimarron, New Mexico, and built a profitable ranch.

It wasn’t long before Allison became known as a nice man until he started drinking – then he was a mean drunk with a violent temper. There are numerous stories about his escapades after a night at the local saloon; tales that include shooting out lamps, lanterns, mirrors and making newcomers dance by shooting at their feet. One story tells how Allison rode through the streets of Mobeetie, Texas, naked except for his gun belt.

In those wild days, grudges were kept until vengeance could be had. In 1874, Texas gunslinger Chunk Colbert arrived in Cimarron looking for Allison. Nine years earlier, Allison had severely beaten Colbert’s uncle. After finding Allison, the two men spent the day drinking and gambling; Colbert invited Allison to dinner, with plans to kill him. After the meal was finished Colbert suddenly reached for his gun under the table and leveled it at Allison. Colbert’s gun nicked the table giving Allison time to draw his gun and shoot Colbert in the head.  Later when Allison was asked why he had dinner with Colbert, Allison answered, “Because I didn’t want to send a man to hell on an empty stomach.”

Allison’s reputation grew and was widely known. Eventually Allison sold his New Mexico ranch to his brothers and migrated to Sedalia, Missouri, then to Hays City, Kansas. While in Kansas, Allison was described by the Kinsley Graphic on December 14, 1878, as: “His appearance is striking. Tall, straight as an arrow, dark-complexioned, carries himself with ease and grace, gentlemanly and courteous in manner, never betraying by word or action the history of his eventful life.”

Allison married Medora “Dora” McCulloch in 1881; the couple would have two daughters: Patti Dora and Clay Pearl who was born seven months after her father’s death. In 1883, Allison bought a ranch located on the Texas-New Mexico border northwest of Pecos.

On July 1, 1887, Allison was hauling a load of supplies to his ranch from Pecos when a sack of grain fell from the wagon. Allison fell from the heavily loaded wagon and was run over by the wagon wheels, breaking his neck. The horses reared and lurched forward; his neck was further crushed by the buckboard almost decapitating him. Allison was only 47 years old and didn’t die in a blaze of glory of gunfire but rather by his own wagon forty miles from town. Clay Allison was buried in the Pecos Cemetery the day after his death. It is said there were hundreds of people attended his funeral. Dora remarried and moved to Fort Worth, Texas.

In a special ceremony on August 28, 1975, Allison’s remains were reinterred in Pecos Park at the West of the Pecos Museum.