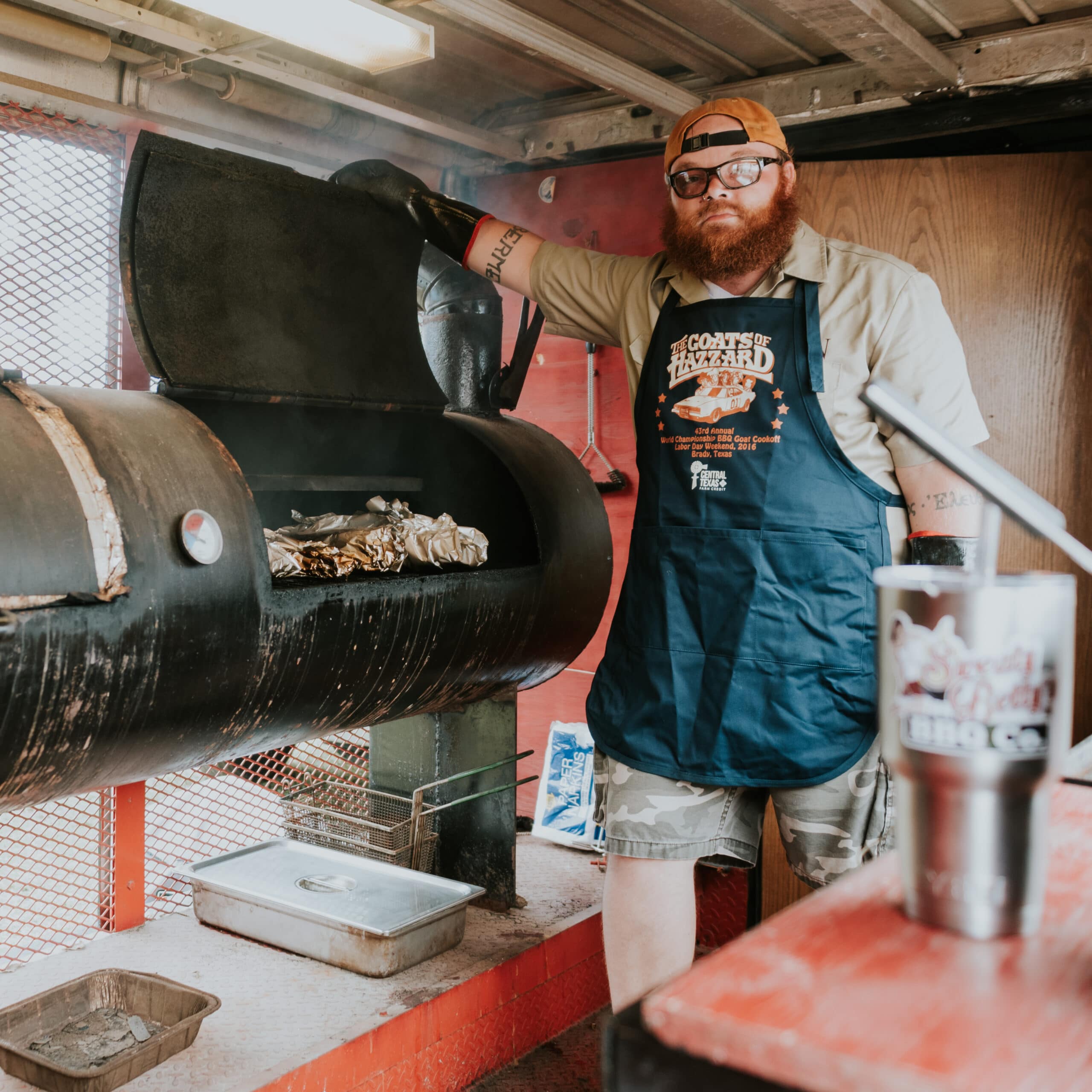 Take a deep breath, and you can already smell the savory sauce and hear the drippings sizzle as slabs of goat meat cook to perfection at the annual World Championship BBQ Goat Cookoff in Brady, the “True Heart of Texas.”

The event, first held in 1974, doesn’t actually begin until Aug. 31, but it’s not too early to imagine just how tasty it’s going to be. The cookoff is sponsored by the Brady/ McCulloch County Chamber of Commerce, headed by executive director Erin Corbell. Last year’s cookoff drew 10,000 visitors, up from 5,500 in 2016. Of those guests, 55 percent were local residents, Corbell says, and 45 percent came from out of the county.

Corbell attributes the attendance hike to changes made in pricing, as well as to the addition of beer and wine tasting. Instead of paying separate fees for concerts, bounce houses, a cooler charge and parking, visitors can buy weekend passes that cover everything except food and merchandise vendors and the beer and wine tasting.

“People were hesitant at first,” Corbell says, “but once they did the math, it made sense.”

The logo for the cookoff is a circle, with the slogan “45 Years and Still Smokin’ Goat” printed in the blue outline of the circle. Inside the circle is a smiling goat that looks suspiciously like Willie Nelson, with white beard, braids and red bandana.

It all signals a fun weekend in Brady, which really is the “True Heart of Texas.” That’s not just a chamber of commerce brag: a Texas Historical Commission marker five miles northwest of Brady signifies the geographic center of Texas, an imaginary point whose coordinates divide the state into four equal areas.

Something the Brady/McCulloch County Chamber of Commerce can brag about is being one of the top sheep and goat production areas in the nation. McCulloch County ranks 21st in Texas and 135th in the United States for the number of sheep and goats raised, Corbell says. No wonder the World Championship cookoff is held here.

A couple of folks in town who probably know more than anybody about the cookoff are Joe and Mary King, who’ve been in on it from day one. One son has attended every year, and the younger son, Brian, was born the weekend before the second cookoff and now participates each year, along with four high school buddies. Last year, Brian and his team won the championship for the first time. In the past, they’d never even placed. So what was different last year? Secret sauce? Different cooking method? “They’re not telling,” Mary King says, smiling.

King volunteers at the chamber and helps out each year. It’s something she wouldn’t miss.

“It’s just like a reunion,” she says. “It’s just a wonderful time.”