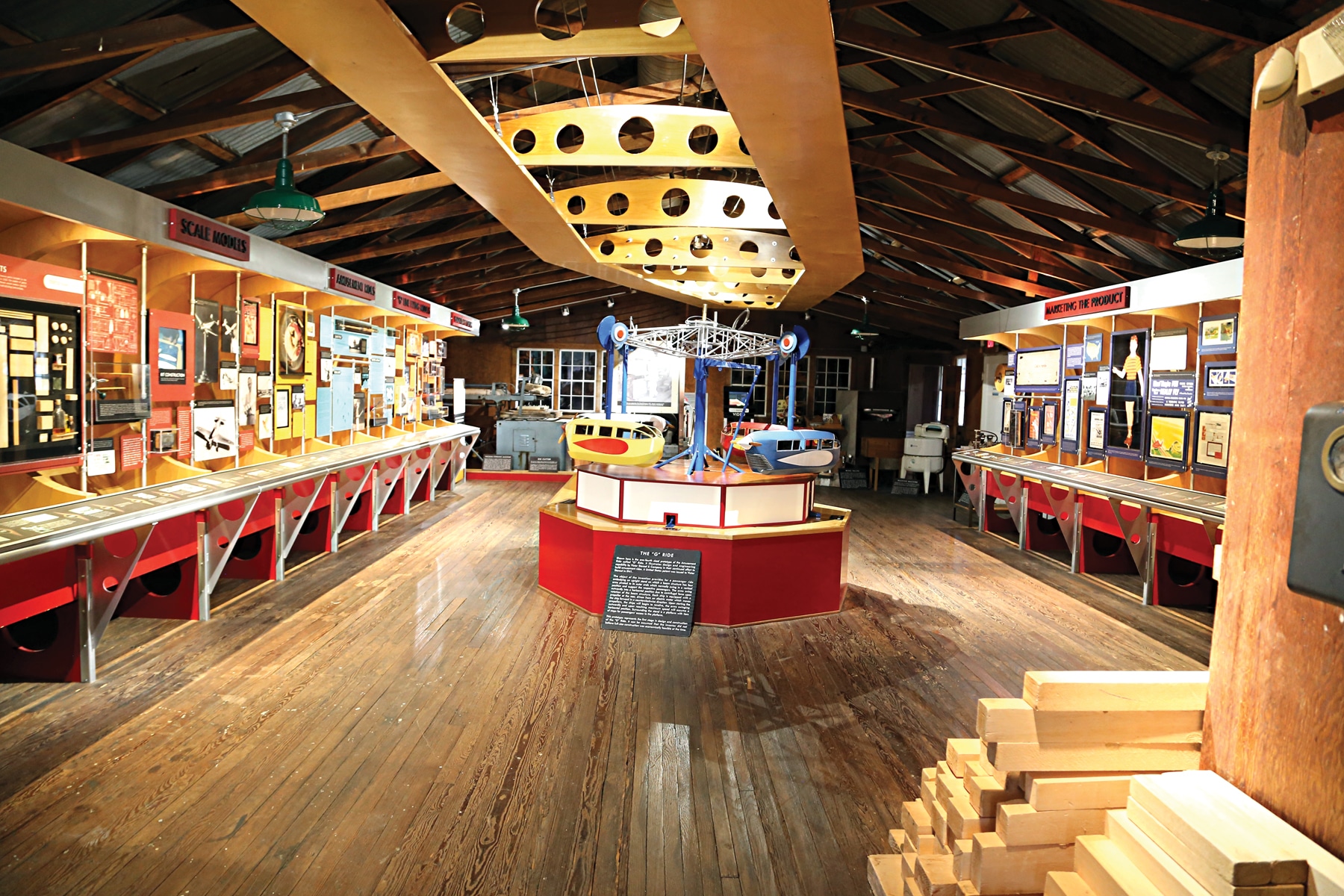 FACTORY WING Built in 1935, the factory wing of the Stanzel Model Aircraft Museum, highlighted by a wooden wing skeleton hanging over the quarter-scale model of the “G Ride” centrifugal amusement ride, includes a detailed timeline of model aircraft.
0 Shares
0

A long U.S. Highway 77 through Schulenburg, Texas, an old-fashioned biplane appears to soar above the red roof of the Stanzel Model Aircraft Museum, fol- lowed by a white vapor trail. Yellow wings contrasting against blue sky, it appears convincingly real—until you observe that it’s not moving.

Like the over thirty scale models found inside the Stanzel Model Aircraft Museum, it presents a facsimile in faithful detail. Capturing the fascinating world of hobby modeling, the Stanzel Model Aircraft Museum is actually three muse- ums within one complex. The main museum, the Factory Wing museum, and the restored historic home of Victor and Joe Stanzel’s grandparents make up the facility. The buildings are adjacent and interconnected for walking tours throughout all three.

The main museum features interac- tive exhibits and static displays covering not only the model airplanes—from early solid versions to later, powered planes that actually flew—but more than thirty different patented designs for amusement rides and game machines. It focuses on the fruitful seventy-year partnership between brothers Victor and Joseph (Joe) Stanzel that resulted in the Victor Stanzel Company.

The Factory Wing museum is the original 30’x60’ Stanzel factory building, where visitors today can follow a detailed timeline and experience the actual nuts-and-bolts of kit production from drafting to finished product. Relocated to the complex in 2005, the museum houses numerous hand-built machines custom-designed by Joe to meet specific needs of manufacturing.

The historic home of Franz and Rozina Stanzel is restored and furnished as it appeared in the 1800s. The house and entire museum complex is located on part of the family’s original 100 acres that dates back to 1873, when the couple arrived from Austria. Victor and Joe moved to town at an early age after their father died, but spent time helping their uncle on the family farm. Working on the farm instilled discipline and a strong work ethic, but cadets flying overhead from the nearby airbase in San Antonio sparked Victor’s interest.

In 1926, as a teenager, Victor Stanzel started learning complex design, engi- neering, and manufacturing concepts from science and aeronautical engi- neering magazines. From his extensive reading he learned about the growing popularity of true-scale models. In his bedroom he started carving 20-inch solid scaled aircraft from balsa, eventually selling them in San Antonio to the same fliers who’d first captivated his attention.

Because the solid planes took too long to make, Victor moved to build- ing kits of planes that took less time to manufacture and could actually fly. Intrigued with designing sophisticated controls, he eventually came up with a design to control the airplane with a single wire!

Unlike Joe, who finished high school, Victor studied a wide variety of correspondence courses, from drafting and tool making to machine shop management. When Joe joined Victor, they complemented each other’s strengths to create quality products for an evolving customer base, attracting younger kids with simpler, ready-to-fly planes complete with electric motors as well as the sophisticated gasoline engine kits tackled by more seasoned modelers.

Victor tended to overbuild, never worrying about excess inventory because he felt it more important to continue making kits that kept employees working and avoided layoffs. Ted Stanzel, the brothers’ nephew and eventual company president, maintained that same business philosophy despite low sales until raw resources were gone and the company was forced to close in 2001. Museum director Lucy Stanzel explains there are still kits avail- able, as well as full-sized posters of designs and schematics. Recognized for their dedication to the model airplane industry, both brothers were inducted into the Academy of Model Aeronautics Hall of Fame in 1986.

Though the brothers originally envisioned a museum as early as 1986, neither lived to see construction.

Following Victor’s death in 1996, the Stanzel Family Foundation hired architects to build and finally open the main museum in March of 1999. The museum exhibits the model aircraft legacy for generations to come, reflecting the hard work and dedication of the family and factory employees.

Visitors can stop by and walk through the museum themselves, or book a guided tour. Besides the knowledgeable and friendly docents, Lucy Stanzel, as the wife of Robert (Bob) Stanzel, Ted’s brother, is a wealth of knowledge about the exhibits of all three museums as well.

Lucy says museum designers told them to charge admission for legitimacy, but she explained, “It’s not about making money here at the museum; it’s about education, especially educating young people. We are especially thankful for support from the Foundation to help us keep our focus on that.”