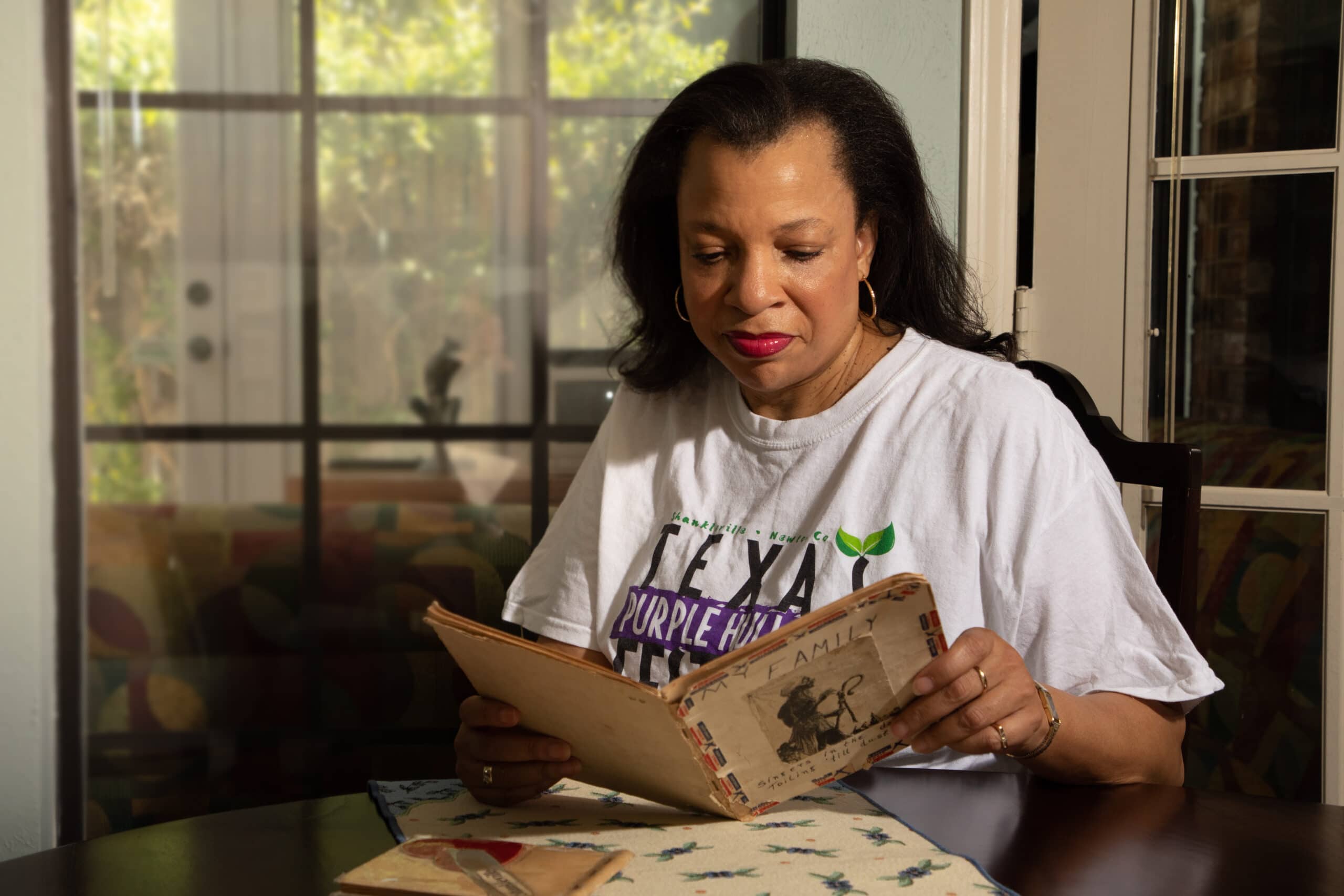 Lareatha Clay grew up knowing her history and understanding from an early age the importance of heritage and community. What she’s come to understand is that family history is often part of a larger story.

As Clay grew up in Beaumont, her mother, Larutha Odom, nurtured her daughter’s love of family. Trips back to Larutha’s childhood home kept that family history alive. Homecomings and family reunions were held in the Shankleville community, located in Newton County between Burkeville and Jasper. Clay became familiar with the stories of an ancestor who was born a slave in Mississippi, ran away from his owner to find his wife (owned by another man), became a landowner and founded Shankleville.

While a student at Prairie View A&M in the 1940s, Larutha began research on this family story. Her father, A.T. Odom, spearheaded the effort to obtain a historical marker for the community. The marker was awarded in 1973 and tells the story of Jim and Winnie Shankle.“That is when I first thought this is more than just family stories,” Clay says. “It fits into a larger view of what history is about.”

Upon graduation from the University of Texas, Clay went to work for Southwestern Bell. Transferred to Orlando, Florida, in the 1980s, she became a member of the city’s preservation board; here, Clay’s love of history would be employed on a larger scale, and she’d become involved in historic preservation.

As part of her board duties, Clay attended the National Trust Conference. She realized there were careers in preservation, and she met people interested in preserving both the natural and the built environments. Clay knew Shankleville had historic fabric; now she began thinking about how she could preserve this community and tell its story. That conference prompted Clay to work on obtaining a National Register designation for the Odom Family Homestead; that designation was eventually awarded in 2012.

Additionally, Clay gained firsthand knowledge of historic preservation as a volunteer at the ZORA Festival in Eatonville, Florida. Eatonville is considered the first African American city in the U.S. and was the home of author Zora Neale Hurston. The annual arts and humanities festival was developed to save Eatonville from being wiped off the map by development. Being part of the festival was a turning point for Clay. She began thinking about having a festival in Shankleville that would entertain, educate and make an economic impact in the region.

Clay returned to Texas in 1995 with the goal of being appointed to the Texas Historical Commission so she could continue to learn about historical preservation through connections she’d make. Achieving that goal in 2001, Clay traveled the state visiting communities where heritage tourism is a recognized part of the economy. Many places were off the beaten path, like Shankleville, which only fed her desire to bring people there.

In 2005, Thad Sitton and James H. Conrad authored Freedom Colonies: Independent Black Texans in the Time of Jim Crow and coined the phrase “freedom colonies.” After reading the book she realized that there was a name for the community she grew up with: a freedom colony. Clay describes a freedom colony as, “a settlement or a town, but basically a place where African Americans owned their land, had a church, school and cemetery. It doesn’t have to be on the map, just a collective belief that it exists. The communities know what the boundaries are, but they can change.”

That set in motion plans for developing the Texas Purple Hull Pea Festival and the Aya Symposium. The name of the festival comes from the purple hull peas grown all over East Texas. It’s also a tribute to Clay’s fond memories of planting, picking and shelling peas with her grandparents.

The first festival and symposium were held in 2014 in Shankleville at the historic Addie L. and A.T. Odom Homestead. Clay’s mother and siblings plus local volunteers were on hand to help.

The next year, Clay teamed up with Andrea Roberts, an assistant professor at Texas A&M and the founder of the Freedom Colonies Project. Together, they began working on the festival and introduced freedom colony activities into the symposium. In addition to food-centered presentations, the symposium began to offer sessions exploring the histories, social foundation and people connected with the more than 500 freedom colonies in Texas.

This year the newly named Aya Symposium will be held at Prairie View A&M a few days before the festival. Aya refers to the Adinkra “fern” symbol that connotes endurance and resourcefulness – the epitome of Texas freedom colonies. Historians, authors, preservationists and archeologists come from across the state and nation to be presenters.

Named for Jim and Winnie Shankle, known as first Newton County blacks to buy land and become local leaders after gaining freedom by emancipation. Both were born in slavery: Jim in 1811, Winnie in 1814. After Winnie and her three children were sold to a Texan, Jim ran away from his Mississippi owner. He traveled by night, foraged for food, swam streams (including the Mississippi River), walking out of sight the 400 miles to East Texas. At dusk one day he found Winnie beside her master’s spring (800 ft. W). After slipping out food for several days, Winnie told her master, who arranged to buy Jim. The couple worked side by side, bringing up Winnie’s children and six of their own: Wash Rollins, Tobe Perkins, Mary McBride, George, Henry, Houston, John, Harriet (Odom), B. M. (Lewis). In 1867, they began buying land, and with associate, Steve McBride, eventually owned over 4,000 acres. In their neighborhood were prosperous farms, churches, a cotton gin, grist mills, sawmills, schools– including McBride College (1883-1909), built by Steve McBride. Jim and Winnie Shankle are buried in Jim Shankle Cemetery (600 Ft. SW). A great-grandson, A. T. Odom, has been guardian of this heritage. Annual homecomings have been held since 1941.