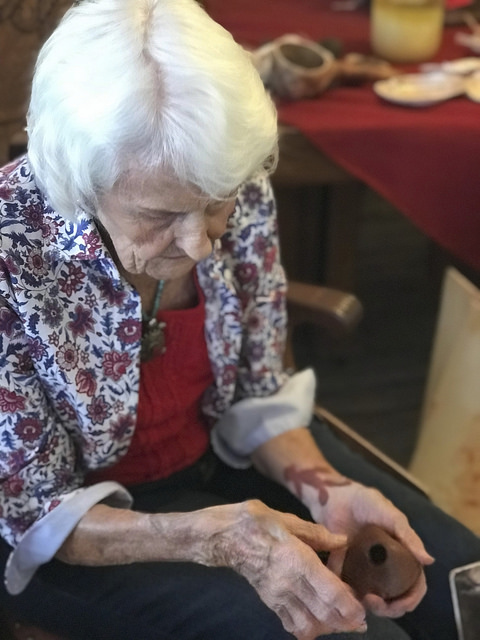 A diminutive lady with white hair, sparkling eyes and an easy laugh scrapes a reddish-brown rock, mixes the rock shavings with a dab of water, then paints her arm while sharing the story of Paint Rock. “It’s important to have an appreciation for your surroundings and to be aware of what’s gone on before you,” she explains. “People have been here for thousands of years.”

Kay Campbell and her family have been preserving and protecting the largest pictograph site in Texas since the mid1870s.

Later, Campbell leads a walking tour along nearly half a mile of a limestone bluff about 70 feet high and just a few hundred yards from the Concho River. The bluff is covered with more than 1,500 pictographs. Red, yellow, orange, black and white drawings include animal and human figures, handprints, tally marks and geometric shapes. Campbell points out the various images and interprets several pictographs that clearly depict a historic event.

Campbell’s grandfather, Dunlap Edward Sims, grew up in Mexico, Mo., and while he had a background in agriculture, an illness kept him from working in the fields. When his parents sent him to college, Sims became interested in history and the Southern Plains Indians. “After my grandfather’s third year in college, he convinced several friends to travel with him by train to Fort Worth,” Campbell says. “Once they got there, grandfather Sims purchased a wagon and team of oxen and, with his companions, headed west.”

Sims had learned the pictographs were documented on old maps from Spanish missionaries. “When he found this site, some of the drawings had already been defaced,” Campbell says. “It’s typical evidence of cultural clash with one group trying to do away with the remnants of another group. My grandfather bought this place to protect what he knew was historically important.”

With help from his older brother, Sims opened a store in the Paint Rock community in 1878 but immediately started buying land along the Concho River as it became available. By 1886 Sims owned about 14,000 acres, including the Paint Rock limestone cliffs.

Just a few years later, during the Great Depression, Campbell’s father died. Her maternal grandmother moved in to help with the children while grandfather Sims showed her mother how to run the ranch. As people showed an interest in the pictographs, members of the Sims family would lead tours of the site. Campbell’s mother began taking her to see the pictographs when she was 9 years old.

At 16, Campbell graduated from Paint Rock High School. She was the only girl in her class and was valedictorian; Fred Campbell, whom Kay had dated since she was 13, was salutatorian. While Fred went into the Navy before attending Texas A&M, Kay attended Texas Christian University. By 19, she’d completed requirements for her Bachelor of Arts degree, but she decided to remain for graduate studies and to work in the art department. There, the head of the department recommended Campbell for a position to head up the girl’s art department in Clayton, N.M. She interviewed for the post and was hired. “I was such an idiot 20-year-old girl!” Campbell laughs and says. “I cannot imagine how I had that much nerve!”

While teaching in New Mexico, Fred came to visit, and shortly thereafter Kay and Fred married. “I never finished my master’s degree but pursued certifications,” Campbell says. “As an elementary, middle and high school teacher, I taught art, Spanish and language arts. I taught for 30 years and never applied for a job!” They moved around West Texas, eventually returning to Paint Rock to live on their portion of the original Sims Ranch that includes the pictographs. “We’re motivated to preserve and protect the pictographs,” Fred told the San Angelo Standard-Times, “and to continue learning more about them.”

The pictographs have always held a place of importance in Kay Campbell’s life. Through the years, she’s heard theories of what the rock art symbols mean. And for more than 60 years, she’s continued the family tradition of giving guided tours of the pictograph site.

Campbell says it’s believed that as many as 300 different cultures may have camped in the area during a 12,000-year span. Pieces of pottery and arrow points indicate the site was a major campground. The number of pictographs and recent finds indicate the site was probably a ritual site.“It’s a place where many different cultures and beliefs are represented,” Campbell says. “Paintings have been attributed to Jumanos, and then to Apache and Tonkawa tribes, with the more recent images credited to Comanches who were in this area from the mid-1700s to the 1860s.” There are experts who can interpret these markings. “We’ve learned that these are not just careless marks,” Campbell adds. “This is a place of power and one where people put a lot of thought into what they were trying to communicate.”

In the late 1980s, Kay and Fred began to notice “solar interactions” with the pictographs. In particular, Campbell noticed a ray of light lining up with the feet of a human figure so that it appeared to be walking up a line to heaven. While giving a tour in December 1996, Campbell saw a dagger of sunlight interacting with a shield-shaped picture. Gordon Houston, who has a master’s degree in astronomy and is the Schaefer Observatory director at Blinn College’s Schulenburg campus, has done much research at Paint Rock. According to Houston, twelve active solar markers have been identified at Paint Rock, and it’s possible that more will be discovered. (The interaction of sunlight and shadow on rock art is known as a “solar marker.”)

Although Fred passed away in 2017, Kay Sims Campbell continues to welcome tourists, school groups and scientists; throughout the year she averages a tour a day. “My family appreciates our responsibility to be good stewards of this site and to keep it possible for future generations to visit,” she says. “It’s important to understand what’s gone on before, and it’s important to share what you know.”