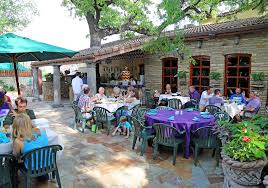 It’s hard to miss Fort Worth’s iconic Joe T. Garcia’s when driving through the north side
of town — you can usually see the line from all the way down the street, sometimes stretching and meandering to amusement ride-like proportions. It wasn’t always that way, mind you, but with word-of-mouth marketing since 1935, Joe T. Garcia’s growth from a 16-seat hole in the wall to a more than 1,000-seat Texas staple is a truly impressive feat.

The restaurant serves more than 350 tables from three kitchens and has a staff that takes incredible pride in its work — in fact, more than 400 applicants try to snag just 15 or so server spots every year. The dinner “menu” famously doesn’t exist (you’ve got two options: enchiladas or fajitas), and the restaurant still doesn’t take credit cards. There are stories of celebrity visits galore, from Elvis to Tiger Woods to Hillary Clinton.

But behind the impressive statistics and lore, there’s a story of heritage and persever- ance, strong women outweighing tilted scales. “We should probably be closed actually,” says Jody Lancarte, who’s worked at Joe T.’s since marrying into the family at 17 years old in 1970, “because no restaurant could do what we’ve done.”

Joe T. Garcia and wife Jessie (aka “Mama Sus”) first opened Joe’s Place in 1935, steadily growing and acquiring dilapidated nearby buildings to renovate and fold into the restaurant. “He was a really political man, and he knew all the attorneys and bankers in town,” Lancarte says, “so there wasn’t a problem expanding.”

But in 1953, Garcia passed away from an aneurism. “It was not expected at all, and he had bought all that land,” Lancarte says. “When he passed away, suddenly the restaurant and surrounding property was all controlled by two Hispanic women — Mama Sus and her daughter, Hope.”

In 1950s Texas, the idea of two minority women controlling blocks of property didn’t
sit well with the establishment. All of a sudden, the banks started calling their notes. “I think it was the banks and town telling them they didn’t think they could do it,” Lancarte says.

But Mama Sus and Hope kept the operation running, paying the banks for the land Joe bought every day to prevent them from seizing the restaurant and shutting it down. “They were never afraid of hard work,” Lancarte says.

As the restaurant developed and flourished, so too did its nod to Hispanic heritage. In 1970, Lanny Lancarte (Jody’s husband, who runs much of the daily operations to this day) and brother David began developing the patio area of the restaurant. Nowadays you’ll find patio seating across the country, even in strip mall restaurants. But in the 1970s, the concept wasn’t nearly as prevalent — and certainly not to the extent of Joe T. Garcia’s.

“We traveled quite extensively in Mexico with the grandmother and the mom,” Jody Lancarte says. “You always had patios in Mexico, and in the middle of the houses there were gardens.” The family brought the Mexican custom back to the restaurant, also putting in a pool that was originally intended to entertain the children but soon became a popular dining fixture.

Nowadays, the “patio” is more like an oasis, with nearly a thousand potted plants, hundreds of trees, multiple fountains, doves and meandering paths around the restaurant that have been renamed as roads or “calles” to honor members of the family. Adorned with the original neon sign, Joe T.’s still proudly celebrates its heritage, from preserving the original window Mama Sus used to serve from to keeping (and still using) one of the original stoves.

But when honoring the restaurant’s heritage, it always comes back to the food. There’s something to be said about carrying on a family tradition for eight decades, teaching fourth and fifth generations of children how to make the exact same taco Mama Sus served to hungry workers in the 1930s.

And to this day, everybody in the family has their first job working the restaurant — whether it’s rolling silverware when you’re 8 years old, serving dozens of hungry customers every hour or facilitating catering across the country. Of course, many of the Garcia and Lancarte ilk go on to professions outside the restaurant industry, but the lessons they learn in their early days at the restaurant stick with them whichever route they take.