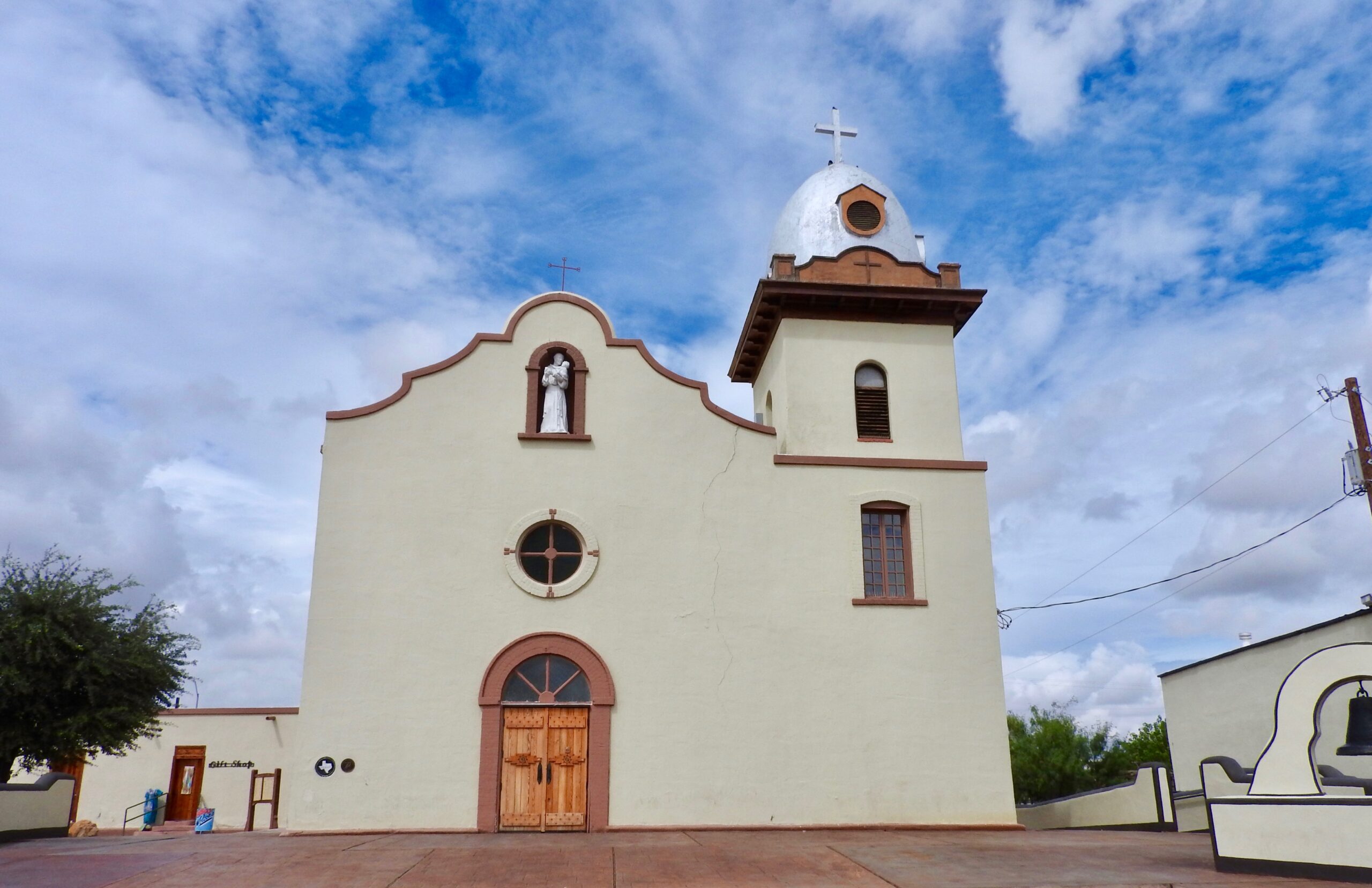 Thirteen miles from bustling downtown El Paso, between the Rio Grande and fastmoving Interstate 10, lies the oldest community in Texas and the seat of its oldest running government. Ysleta del Sur Pueblo, the state’s only pueblo, has been home to the Tigua (pronounced tiwa) people for more than 300 years.

The Ysleta tribe welcomes visitors today to its mission churches and cultural center to learn the story of how a Puebloan community came to thrive here on the border.

After leaving their homelands of Quarai Pueblo (in today’s central New Mexico) due to drought in the 1600s, the Tigua people sought refuge farther north at Isleta Pueblo. (Pueblo, meaning “town,” is a compound-type building where many families live together; often built of adobe, some pueblos reach four or five stories tall.)

During the period of early Spanish settlement, in the late seventeenth century, Pueblo Indians in the region rose up against Spanish domination and drove out the settlers. The Spanish retreated south to Texas, but they returned with a vengeance a year later. This time some of the Indians (mostly Tigua) were captured and taken 400 miles to the area just east of modern-day El Paso.

Forced into labor, the Christianized Tigua put their talents for farming and irrigation to use. By 1682 they began construction of buildings, including the Ysleta Mission, using the same techniques as they had with the pueblos they’d left behind and dedicating the church to the Franciscan patron Saint Anthony. By 1751, King Charles V of Spain deeded land to the Tigua for their service, and in time other mission churches were built as the community grew. Today these houses of worship, Mission Socorro and Presidio Chapel of San Elizario, form the Mission Trail along El Camino Real, the King’s Highway.

Ysleta del Sur came under Texas rule in 1848. The new State of Texas, ignoring the earlier Spanish land grant, gave public land to settlers to develop the expanding city of El Paso, which in turn seized the land given to the Tigua. “The white men were taking our lands,” says Johnny Hisa, former Tigua governor and tribal elder, “and there was nothing we could do about it.” The Tigua lost almost all of their holdings, and only the land around the Ysleta Mission (about 66 acres) remained in the hands of the impoverished Tigua.

Fast forward to the mid 1960s, when an El Paso businessman, Tom Diamond, who sympathized over the Tigua people’s destitute living conditions, sought support from the Texas legislature. The Tigua became a protected tribe in Texas in 1967, and 20 years later received federal recognition.

The Ysleta del Sur Pueblo today is a federally recognized Native American tribe in the United States (one of only three in Texas) and a sovereign nation with more than 4,000 citizens.

The Tigua manage various business and cultural enterprises and are trying to regain their lands little by little. “When something comes up for sale, we try to buy it,” says Rene Lopez, traditional captain of the tribe. Although the tribe still has a long way to go in that process, leadership works unremittingly to protect and preserve their indigenous tradition.

Despite adversity, the Ysleta Mission has been rebuilt and operates as one of the longest continually occupied religious buildings in the United States. Built over 300 years ago, the mission has undergone many changes, including damage from fire and flood. In 1891, modernizing Jesuits renamed the church for Our Lady of Mount Carmel and removed the traditional statue of St. Anthony from the altar to a lesser site.

By the 2000s, deterioration of the church building had become severe enough to prompt tribal leaders to seek grants for restoration. The project started in 2016 and took 11 months. With loving attention to detail and tradition, workers reused the worn original wood floors by flipping them over, handcrafted new woodwork, repainted the murals and — most important to the Tiguan people — returned St. Anthony to his place of honor on the altar.

“The mission was built for St. Anthony, the original patron saint of Isleta Pueblo,” Hisa says. “That’s the first thing I told people; I’m going to put Saint Anthony back where he belongs — on the altar.”

Saint Anthony currently resides behind the altar, with Our Lady of Mount Carmel in the right transept, while a new statue, St. Kateri Tekakwitha Lily of the Mohawks, graces the left side.

The Tigua still respect their ancestors’ religious beliefs and observe traditional holidays at the mission with singing, dancing, drumming and chanting led by the chief (cacique) and the war chief. The Christmas season provides prime opportunities for visitors to witness the melding of cultural traditions at Ysleta del Sur Puelo. And the mission church stands, grandly, to welcome worshippers for centuries to come.