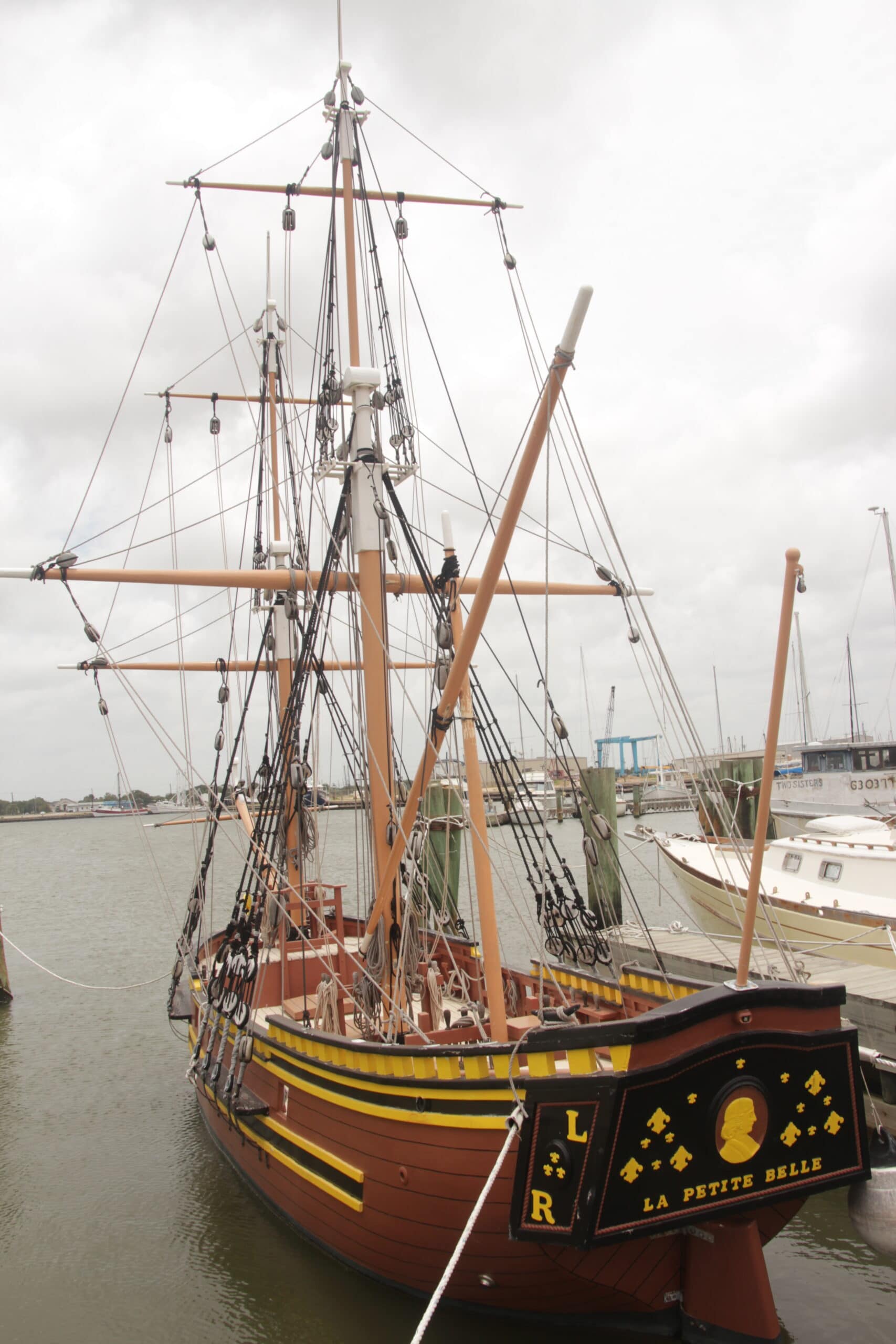 “Law West of the Pecos”

Hurricane Harvey vented its wrath on Texas in September 2017 and left catastrophe in its wake. But our communities are rebuilding, reviving and open for business. A recent journey along the coast offered testament to the region’s spirit of rejuvenation after the storm.

Three centuries before Harvey, another cataclysmic tempest sank a ship, doomed a colony and changed the course of history. The La Salle Odyssey heritage tourism trail offers a glimpse into a furious clash of cultures in the Coastal Bend at a time long before this land was called Texas.

In February 1685, three French ships landed on the shores of Matagorda Bay. A faulty map had led French explorer Robert Cavelier, Sieur de La Salle, astray and directly into enemy territory, New Spain. Seeking a reprise of his landmark 1682 expedition to the mouth of the Mississippi River, which he’d claimed for King Louis XIV, La Salle brought 300 colonists to the New World to establish a trading port and lucrative exports of hides and furs to Europe. But the diversion turned both costly and deadly when one ship sailed back to France and the other two sank off the Texas coast, taking the colonists’ supplies — and their dreams — to the bottom of the sea.

Upon learning of the intrusion into its territory, the Spanish Crown sent 11 expeditions by land and sea to locate La Salle’s colony, Fort St. Louis, and rout the French. They found the ship La Belle sunk near Matagorda Peninsula and the colony destroyed by Karankawa Indians. France’s foothold had failed, and Spain became the dominant force in the region, establishing Texas’ rich Hispanic heritage.

In 1995, Texas Historical Commission (THC) archaeologists, searching for the lost ship, dived on a promising location and found a bronze cannon with French inscriptions, including the royal crest of Louis XIV. La Belle had finally been found after being entombed for three centuries at the bottom of the Bay.

For the next two years, THC archaeologists excavated the ship and its cargo, using a cofferdam to hold back the bay waters and execute essentially a dry-land excavation on the seabed. A total of 1.8 million artifacts were exhumed, including two more cannons, trade goods, pottery, tools and weapons. The skeleton of a sailor was found deep in the ship’s bow, a tragic reminder of the human cost of the failed expedition. More than 25,000 people visited the cofferdam near Palacios to watch as layers of time were carefully peeled back. The shipwreck excavation was the most complex archaeological project in the world and received media coverage across the globe.

In the midst of unearthing La Belle, the site of Fort St. Louis was found when eight French iron cannons were discovered on a bluff above Garcitas Creek. The THC moved its headquarters to Victoria, and another intensive excavation was launched. A public archaeology laboratory was established in a storefront on the city’s main square, and visitors stopped by daily to view the latest discoveries and new revelations of local history.

Over the next two decades, historical treasures from the ship and fort found their way into eight museums: the Bullock Texas State History Museum in Austin; the Corpus Christi Museum of Science and History; the Texas Maritime Museum in Rockport; the Texana Museum in Edna; the Calhoun County Museum in Port Lavaca; Museum of the Coastal Bend (Victoria); Matagorda County Museum (Bay City); and the City by the Sea Museum in Palacios. The latter seven museums form the La Salle Odyssey, a heritage tourism trail that leads visitors on a voyage along the Texas coast and centuries into the past.

The authors of this article have spent 23 years exploring the legacy of La Salle. Jim Bruseth directed the shipwreck excavation and work at the Fort St. Louis colony, while Toni Turner has written articles and edited publications about the projects. We decided to retrace the footsteps of our favorite historical figure and relive the saga of his doomed expedition. We visited the Odyssey museums and reveled in the stories each tells about the remarkable accident that forged the foundation of the Lone Star State. This coastal trail offers endless opportunities to combine a history-based adventure with world-class recreational activities and great cuisine, perfect for family fun.

First we headed to Palacios, site of the THC team’s headquarters during 1996 and ’97 and 14 miles from La Belle’s underwater tomb. The City by the Sea Museum showcases the discovery and recovery of the ship.

Museum director Edith Gower says a new state-of-the-art interactive exhibit is planned, which will include a life-sized animated figure of the sailor found in the ship. “We’ll be adding a full-size bow of the ship on the first floor, leading to our new exhibit, La Salle Adventure, on the second floor. We’ll feature a replica cannon, a model cofferdam and ‘Dead Bob,’ who’ll tell his sad tale in English, French, Spanish and Vietnamese. With a capital campaign to build out our second floor and our new exhibit, we’ll feature Venetian glass beads, lead shot and other artifacts that Palacios school children recovered from sand.”

At the nearby city docks you can also visit La Petite Belle, a half-scale replica of the expedition’s most famous vessel.

“There is so much history here in Calhoun County,” Cormier says. “We’re proud of our role in the early settlement of Texas. We’ve been home to inhabitants dating back 13,000 years.” She guides visitors through exhibits of the French expedition’s weapons, trade goods, ceramics, nautical instruments and personal belongings, along with a model of Fort St. Louis.

Apart from displays about the county and local dignitaries, visitors can see the glass lens from Matagorda Island’s Lighthouse and the Husak Collection of regional Indian projectile points.

The Museum of the Coastal Bend exhibits artifacts from French and Spanish occupations at Fort St. Louis and Presidio La Bahía, as well as regional prehistory dating back 13,000 years.

You can see the fort’s famous cannons and come face to face with two of the area’s 17th-century colonists thanks to a forensic sculptor’s reconstructions.

“Our museum was fortunate to receive minimal damage from Hurricane Harvey,” museum director Sue Prudhomme says. “Thanks to the hard work, determination and generosity of our community, museums and cultural institutions are open and eager to see a return of tourism.”

Barbara Smith, director of Bay City’s Matagorda County Museum, has spent 20 years educating the public about the area’s rich history, but she especially enjoys telling people about La Belle. One of the ship’s bronze cannons stands at the exhibit’s entrance, and there are displays of weapons, tools, personal items and dinnerware.

“Hardly a week goes by that we don’t have visitors who come in specifically to see the La Belle exhibit,” she says. “It’s as interesting and as relevant as the day it opened. Our Children’s Museum also offers educational programs and activities for younger visitors.” Edna’s Texana Museum showcases the violent clash of cultures between 17th-century Spanish and French explorers and the indigenous Karankawa Indians of the coastal region. First European Contacts examines native reactions to the Europeans and the impact on their way of life.

La Salle and the Karankawa explains a relationship that was initially friendly until French crew members stole Indian canoes. A hide-covered replica Karankawa house is centered among displays of trade goods such as glass beads and brass rings.

Moving down the coast to Rockport, our next Odyssey stop was the Texas Maritime Museum. “Our museum is blessed to be recovered, restored and reopened,” says Kathy Roberts-Douglass, chief executive director. “Our board of trustees and staff thank Oliver’s Restoration, our community and the team of individuals who continue to support our mission. May the doors of the Texas Maritime Museum remain open infinitely without interruption ever again!”

The museum’s 1:12 scale model of the ship and its nocturnal, a rare maritime measuring instrument, are the major attractions in the La Belle gallery. The area’s rich nautical history is featured in exhibits throughout the museum, and a new 20-minute film offer visitors a fascinating profile of the Texas Navy.

We ended our personal odyssey at Corpus Christi’s Museum of Science and History, viewing artifacts from the great era of New World exploration. The Birth of La Belle showcases the sophisticated technology inherent in 17th-century shipbuilding traditions. Visions of Empire portrays the struggle between France and Spain for dominance in Tejas, through displays of cannons, guns, pole arms, lead shot and other armaments. You can also see the remains of an even earlier shipwreck (1554): the treasure-laden San Esteban, the oldest scientifically investigated shipwreck in the western hemisphere.

In 1995 our lives were changed forever by the discovery of La Salle’s ship, La Belle, and by the hospitality of the people of the coast. It was great to be back again, wandering seaside highways, seeing old friends, visiting museums and remembering that this region is where our state’s modern history really began. Texas’ coastal communities offer a wealth of culture, recreation, and savory cuisine.

La Salle and his doomed enterprise are now a footnote in history, but his legacy lives on the in the museums of the Odyssey that bears his name.