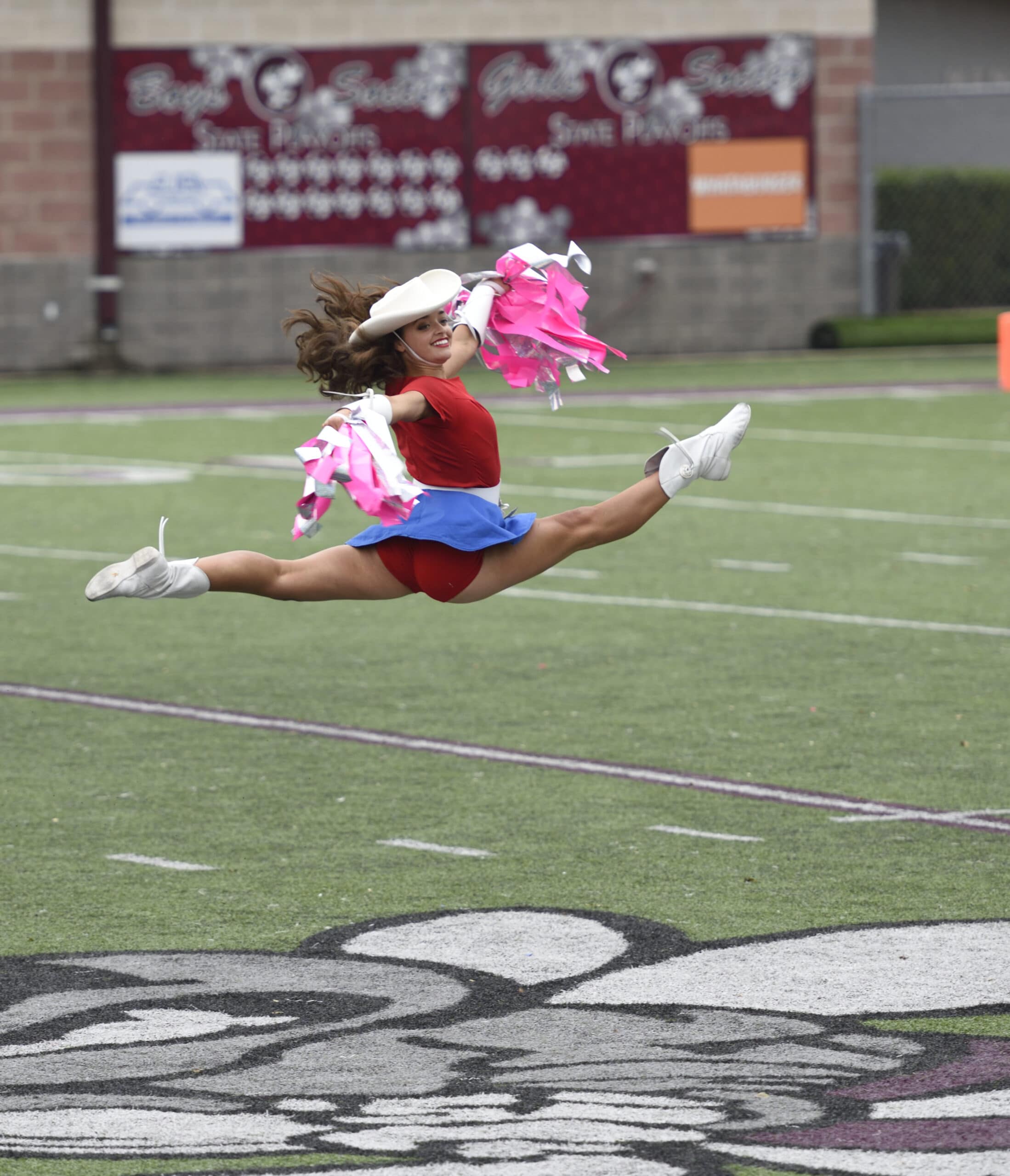 Precision dance teams are a thing in Texas. They enhance sporting events and represent schools in parades and performing arts halls.

We asked team members from three schools to tell us about this rich tradition that started at Kilgore College.

Ryan Wayne, a sophomore at Kilgore College, is a Rangerette majoring in advertising and communications. She knows the Rangerette story well. “Miss Gussie Nell Davis started the Rangerettes as a place for girls,” Wayne explains. Back in 1940 sports were for boys, and girls didn’t really have a place to go. So she started Rangerettes to help with football games — the entertainment aspect. But she also wanted to create an environment where a girl could learn how to be a lady and how to present herself in a respectable fashion … to be a role model for others. She wanted to instill a sense of pride in her girls.”

Growing up in Kilgore, Wayne says, “I always looked up to the Rangerette organization. I admired what it does for the girls — not just the dancing part but preparing them for life. I remember being little and seeing how much the girls loved it, and I wanted to be a part of something that I enjoyed that much.”

There’s more to it than the performances, of course. “We typically go to classes in the morning, practice starts at 1:30 p.m., and we practice until 4:30 p.m. or later depending on the season or how much time we have to prepare for a certain performance. We also have extra practices on evenings or weekends for certain dances. It requires a large time commitment.”

College dance teams are famous for their synchronized high-kick routines. “We kicked in high school, but nothing is like kicking in Rangerettes,” Wayne says. “It requires so much more stamina. Everyone is expected to kick their hat. Everyone dances at our kick finale in April. We start learning the kick in January so we can build our stamina. It’s six to seven minutes of straight kicking. On the stage you do alternating lines and lots of footwork. We’re famous for the jump split — that’s also something that requires some preparation … definitely not a natural movement. You have to perfect the way of doing it without getting hurt.”

Apache Belle team members Amanda Hiles (an elementary education major) and Kayla Hubbard (a nursing major) devote 20 to 25 hours to practice each week. All Apache Belles live together on the same floor of a dorm. “Living together is a whole different ball game,” Hiles says. “We learn how to work together both on stage and off, on the football field and off.”

But it’s not all about the performance.“As an Apache Belle you learn integrity and work ethic,” Hiles adds. “You become a better version of yourself. You learn the skills you need to go into a dance career or a non-dance career. Apache Belles prepares young ladies to go out into the world and represent themselves as responsible and professional.”

Hubbard concurs. “There are high expectations,” she says. “You’re required to have integrity both on campus and off — on social media, on your weekends, whatever it is you’re doing. You’re expected to uphold an attitude of a respectable young lady.”

But the performance is the driving force. “When I step out on that football field in uniform,” Hubbard adds, “I get chills. It’s so much fun, and there’s so much tradition. Performing at halftime is my favorite aspect of the Apache Belles.” Hiles agrees but also highlights “our Spring Show, which includes different dance styles. It’s a bit more relaxed, and you get people who aren’t from around here. And it’s packed for four shows — a full crowd.”

Having completed her first year as a Belle, Hiles’ favorite experience was homecoming, when Tyler played Kilgore. “There was a big crowd,” she explains, “and a lot of them were educated in drill team.” The Tyler/Kilgore football game is the annual opportunity to see both precision dance teams perform on the same field.

The Strutters of Texas State University

In 1960, Barbara Guinn Tidwell, a former Rangerette, founded the Strutters, bringing the precision dance team concept to a four-year university for the first time.

Paige Carter, head captain for 2018, is a senior majoring in dance education and wants to teach, but also “would really like to be a drill team director, which is one of the main reasons I came to Texas State.”

Carter’s favorite performance is the Christmas Show at the Performing Arts Center. “It’s so beautiful in there,” she says. “The lighting is pretty advanced, and the stage surface has a reflective quality, so it’s fun as a performer.”

The Strutters are noteworthy because the team is large, with 110 members, of which 26 to 30 are selected through tryouts to be on the highly sought-after Pom Squad that performs at football and basketball games.

Carter emphasizes that it’s important the Strutters be role models for girls. “That’s one of the reasons people try out,” she says. “Especially in the dance community, we try to set the example so that girls who are involved in dance are looking at the future of dance. We do recruiting in high schools, looking for girls with experience in dance and drill team. We look well beyond dance-ability — we want well-rounded girls … girls who can speak and are nice to each other. Someone coming from a team is important — everyone needs to be a team player.”

But that team provides beneficial individual relationships, too. “Even as large as the team is,” Carter says, “we’re close with everybody. Any team member would drop whatever they had going on if you needed them. It’s a sisterhood, and that’s really cool.”