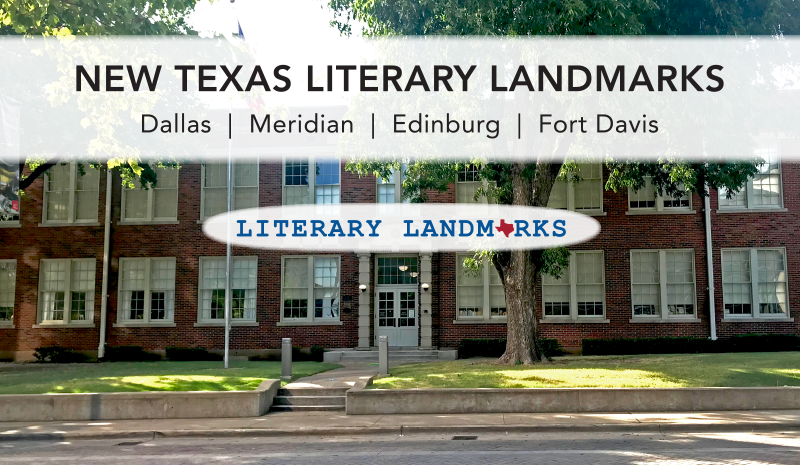 In 2020, Texas had only five registered Literary Landmarks statewide. My colleagues at the Texas State Library and Archives and I decided it was time to add more to our state map to better reflect the rich literary heritage of our great state. So, in late 2020, we launched the Literary Landmark Roundup, organized by the Texas Center for the Book, where I have been working to advance reading and literacy as Coordinator since 2015.

Literary Landmarks are special places located across the country that attract tourists, book lovers, and history buffs to educate the public about the important literary works and history in their state. A Landmark is tied to a specific deceased literary figure, author(s), and/or their work. It could be a writer’s home or birthplace, a library where work was crafted or is housed, an author’s burial site, a special place where literary figures met and discoursed, or an establishment where an author worked or did research.

With special funding from the Summerlee Foundation of Dallas, the Texas Center for the Book’s push for more Texas sites covered the application fee, which also included cost of the foundry-made Literary Landmark plaque, and ongoing assistance to local institutions in creating awareness of the site’s importance to the state’s literary heritage. Final selection is made by United for Libraries, the national administrator of the Literary Landmarks program.

We advertised widely online, in major and local newspapers, and through library, reading, and literacy channels seeking nominations from libraries, historical associations, Chambers of Commerce, educational institutions, museums, and literary societies, among others. After a review period, four new Literary Landmarks were announced on August 25, 2021:

Dedication ceremonies were scheduled throughout late 2021 and early 2022, starting with our kick-off event in Meridian on October 9, followed by a trip to Fort Davis on October 22, leading to a visit to Dallas on January 14, and winding things up with an exciting program in Edinburgh on January 31. You can watch video recaps at bit.ly/TXLitLandmarks2021.

It has been such a pleasure seeing these important sites being recognized across our state—and especially meaningful to join local communities and literature lovers in celebration after the distance and isolation of these last months. We are reminded of the enduring power of books to span time, distance, and differences.

Read more about these four new Literary Landmarks at www.tsl.texas.gov/literarylandmark. We hope to offer the Literary Landmark Roundup again in the future. Stay tuned to the website for the next application window, and… read, y’all!