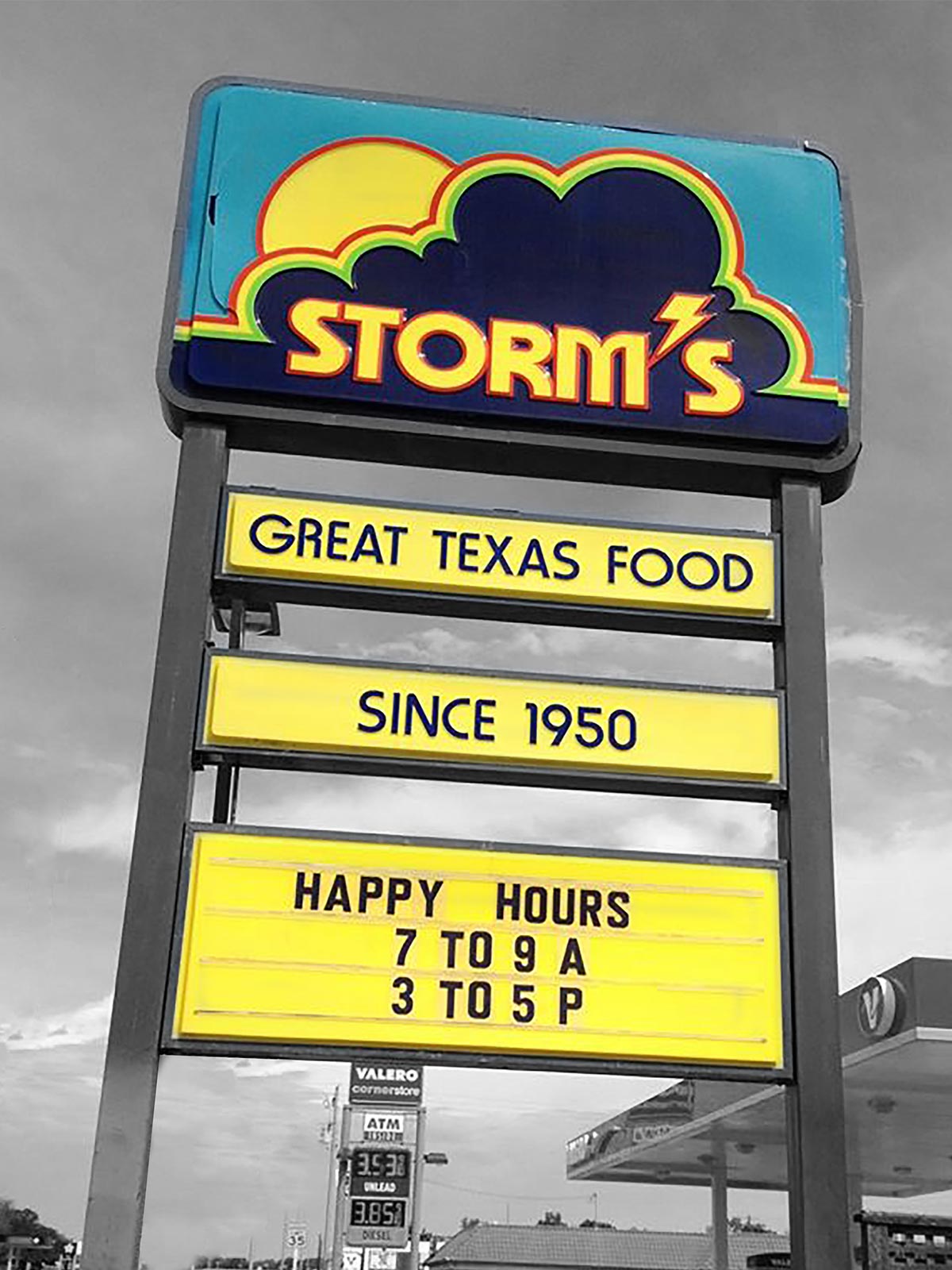 Several years ago, I logged many miles driving back and forth between Fort Worth and San Antonio on a regular basis for my job. I had the choice of flying, but I decided to just make the four-hour trip down Highway 281 in order to avoid the I-35 traffic, but more importantly, to enjoy the scenic heart of the Texas hill country, passing through Stephenville, Hico, Hamilton, Burnet, Marble Falls, and Johnson City.

The favorite part of my trip was hitting Lampasas, home of Storm’s Drive-in Restaurant.

IraDell Storm and her late husband, J.B., began serving burgers in Lampasas under the name of Dairy Cue on September 23, 1950. This classic drive-in attracted many locals and even the soldiers stationed at nearby Fort Hood. IraDell and J.B.’s son Robbis remembers serving a young recruit-in-training named Elvis Presley, whom he characterized as “real quiet.” I’m just guessing that is because he must have had his mouth full of a delicious burger and shake!

Elvis isn’t the only star who’s discovered this gem in the heart of Texas, as music legends such as Randy Travis and George Strait have been known to drop in when they are in the area.

IraDell and J.B. managed the restaurant until the early ’70s, when Robbis picked up the leadership, eventually changing the name to Storm’s. In the early 2000s, Mike Green, who began working in the Lampasas store at the ripe young age of 15, assumed management of the business, and to this day, Storm’s continues to deliver the best, old-fashioned, in-house–ground and griddle-cooked burgers that absolutely hit the spot when your tummy tells you it’s time to stop and grab a bite to eat.

The patties are thin but juicy, and when you combine three of them in what they call the Storm’s Special, you wind up with a half-pound burger that will absolutely make your taste buds sing the Hallelujah chorus and throw in an “Amen!” for the fresh-cut fries or onion rings that makes the meal complete.

You can construct your burger just the way you like with your choice of mustard, onions, tomatoes, lettuce, pickles, cheese, chili, jalapenos, bacon, salad dressing, ketchup, and grilled onions with white, wheat, and sourdough buns to boot.

Our Texas highways and byways are chock-full of genuine, local, mom-and-pop, classic places that become part of the adventure when you strike out on the road, hunting down and discovering one of these favorites as you traverse our great state. The reviews on their Facebook page are testimonies to fans who think nothing of heading out on a day-long trip just to “Get me some Storm’s!”

As you discover your favorites, be sure to keep track of and share your next great find with a friend or a neighbor. It’s what keeps Texas a special place to live and to visit.