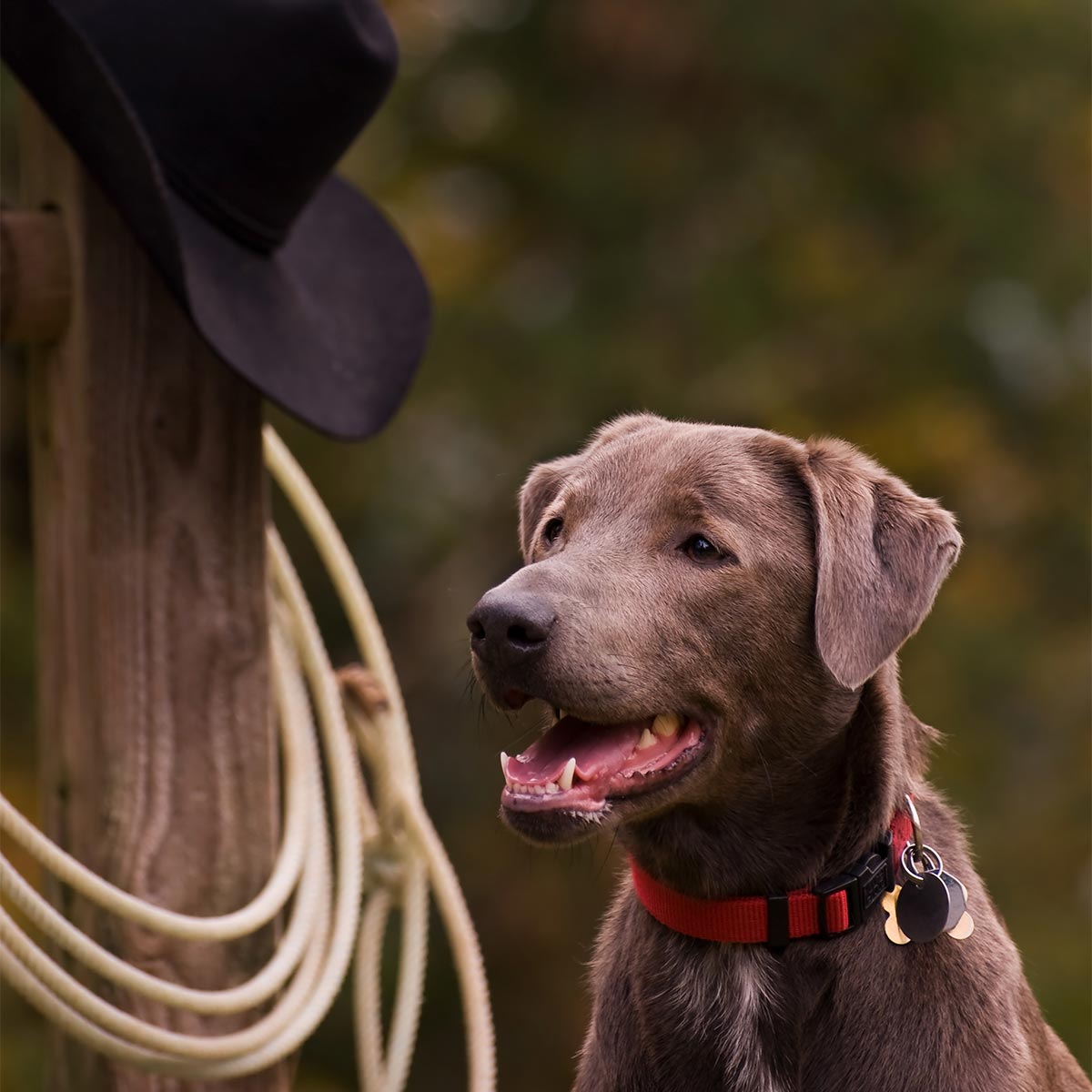 Quite a few Texas ranching families, like James and Tracy McBee of Meadow, still use the Blue Lacy Game Dog for what they were brought to Texas for 150 years ago. Tracy says that husband James swears his Lacys are intuitive and able to reason—“It’s like they are looking at the cows saying, I know what to do.”

The Lacy, a light, strong, and fast working dog, is mostly found on Texas ranches for herding livestock, and also widely used for hunting wild hogs, treeing game, and trailing and tracking game.

Lacys are short-haired, medium-sized dogs that come in a variety of colors. The blues range from a dark charcoal to silver, where reds can be cream, yellow or a rusty red. And then there are tris, which are a combination of the blue and red colors. Their eye color ranges from bright yellow to amber, giving them a distinctive visage. Photo of a Blue Lacy puppy (right) by Sandy Stockton Adcock.

Lacys were brought to Texas via covered wagon in 1858 by the Lacy brothers (Frank, George, Ewin and Harry), who came from Kentucky and settled in the granite hills of Burnet County in the Hill Country. The Lacy brothers claimed the breed was a mix of greyhound, scent hound and coyote. History is not clear which type of scent hound was used in the breeding, but many theorize it was a Redbone hound, Italian greyhound or July hound; any of these breeds would surely be helpful in the Lacy’s talent for picking up the trail of game animals or find a wounded animal on the slightest of blood trails.

The McBees have owned Lacys since 1997 and have been breeders since about 2008. “Lacys need a job to contain their endless energy,” says Tracy. “We have a ton of land that they can run around on, plus my husband uses them at the feedlot and for herding cattle.” When asked what tasks these versatile dogs can be trained to do, Tracy says, “They’re highly intelligent, so they’ll do just about anything you ask of them.” They are also great family pets, Tracy says, but she is quick to add that they are extremely protective of their people and property. “Visitors be warned!”

Lacys are intelligent, intense and alert. They learn skills like the most determined of athletes.

The Lacy breed became so important to Texas family ranches and hunters that after over 140 years of service, the Texas Lacy Game Dog Association filed a resolution with the Texas House of Representatives proposing that the Lacy (particularly the Blue) be named the State Dog of Texas. This legislation, House Concurrent Resolution No. 108, was proposed to recognize the original breeders and their contribution to the State of Texas as well as to honor the Lacy as a Texas original. In June 2005, Governor Rick Perry signed legislation making it official.

In the 19th century the Lacy brothers mainly used the dog’s herding skills to work the free-roaming hogs on their ranch. When more modern techniques and equipment diminished the use of Lacys for herding, the dogs became less common and the breed almost went extinct. But with their unique skills, they became instrumental for hunters and trappers and are still used for that purpose today around the U.S. and into Canada.

One thing’s for sure, though: in Texas, the Blue Lacy continues to reign right alongside the blue of the state flag and the state tartan, and of course, the bluebonnet.