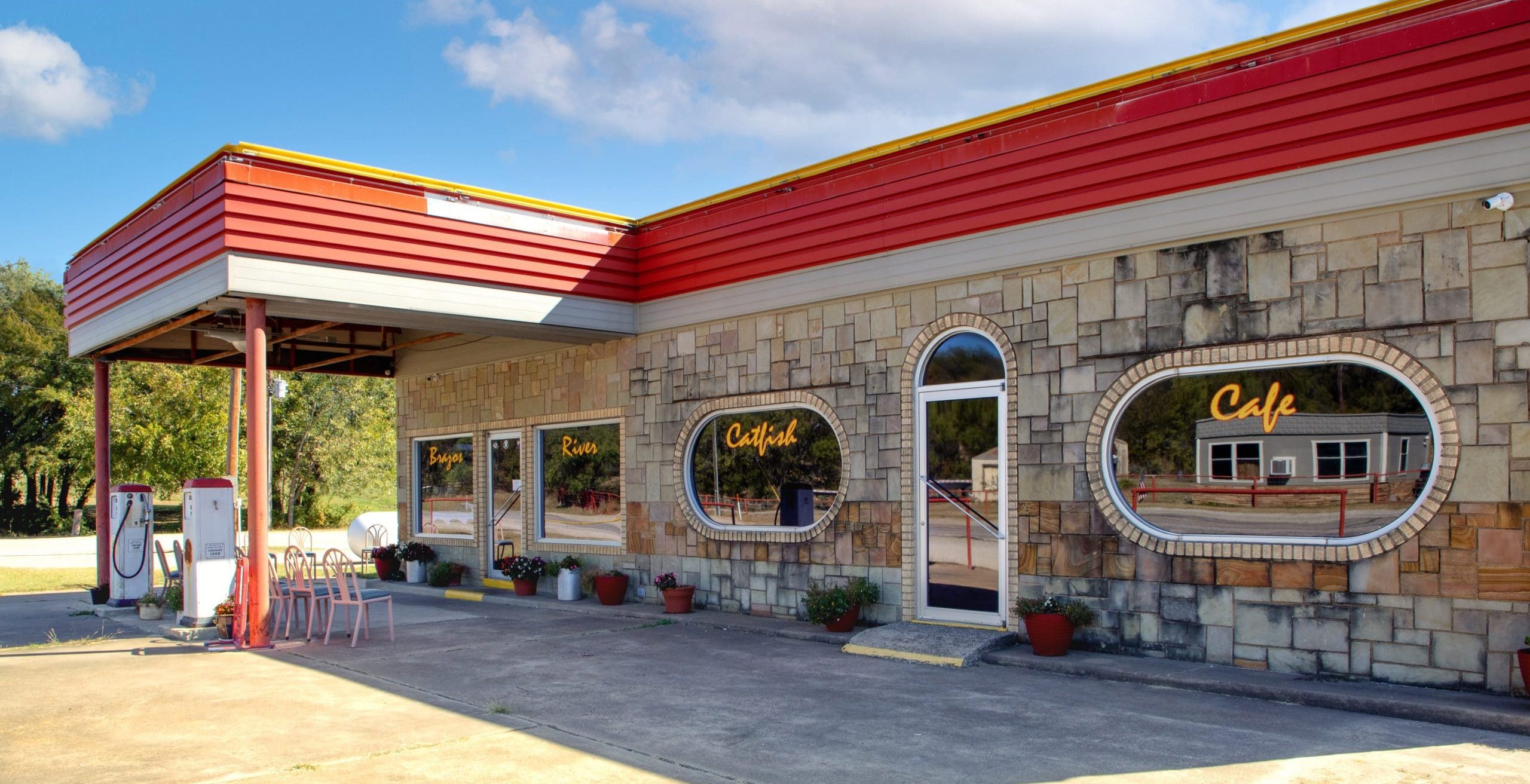 Take a drive down Interstate 20 (I-20) in Parker County, and at the Brazos River bridge looking to the north you will see the predecessor to I-20, U.S. Route 80 (also known as the Dixie Overland Highway) that is now the frontage road. Back in 1934 a beautiful three truss bridge was built to span the river, and you can take a drive over it today. The bridge is on the National Register of Historic Places. To support the travelers that journeyed down the highway, service stations, campgrounds, motor courts, and restaurants were built. I can imagine that the area around the river was a popular destination for tourists back then, and it remains still today. Luckily, some of those early structures are still standing.

Today, one of those highway buildings houses the Brazos River Catfish Café where you can find a mouthwatering catfish dinner. Restaurants can be just about anywhere but, it takes someone special to fall in love with an old building and decide to put in a business. Especially when there isn’t much of a building left. Taking on a project like this isn’t something that is done because it is easy, it is done because the building speaks to something inside an individual, something they just can’t shake. This is the feeling that grabbed a hold of James Griffin when he first saw the dilapidated old restaurant that had opened for the first time back in the 1940s.

Taking a leap of faith, James and his wife Sandra bought the old place. Sandra remembers the first time James took her to see the old Brazos River Catfish Café, it was on Halloween night in 1997. She says, “The building was boarded up and the weeds were probably head high. The doors were all open, the roof had caved in, there was carpet on the floors and anytime you took a step you felt like you would fall in.” However, they had a vision, and by 1999 the café reopened its doors and they embarked on what became a labor of love.

The first owner of the café was Dub Sawyer. Sandra said they had only been open about three months when Dub’s daughter Norma sent photos from her family’s time there. She also came by the café to grab a bite to eat and tell some of her stories. Unfortunately, the Sawyer family only had the café for a short time. They had to sell when Dub died unexpectedly at a young age. The café was then purchased by a waitress, Lois Hill and her husband. The Hill’s ran the café until 1966 when the doors closed. Sandra loves the history of the building and receiving photos and stories from the past. Just inside the front door is a wall with much of the café’s photos and history on display.

The café has a retro vibe with Elvis memorabilia on the walls and Elvis tunes filling the space. The bright yellow and red décor is lets you know you’re in a place where happiness can be found.

Of the fried catfish offerings, diners can select from three types: regular, Cajun and Memphis. When asked which fried catfish recipe is the most popular, Sandra reports they serve just about the same amount of each. In addition to the catfish, there is a wide array of sides and main dish choices. The menu is on their website so take a look and you start planning a trip to Millsap!

If you are lucky, you have eaten at a restaurant where you feel right at home. The regulars and those that are passing through have experienced this feeling at the Brazos River Catfish Café. Sandra and her loyal staff have been serving up some of the best catfish along the scenic Brazos River since 1999. Even if it’s your first visit, everyone that eats there becomes part of the family. The staff and the regulars have a special connection, they celebrate together and comfort each other when times are hard. Sandra told me that, “We have customers that ask, “will you pray for me?” We pray every night before we eat about nine o’clock. When we sit down to eat, we pray for the customers that have asked for a prayer. I would say that we are here by the grace of God.”

The food, the people that work there, and the other diners at the Brazos River Catfish Café definitely make it worth stopping in for a bite.

In addition to the café there is a scenic campground right on the bank of the Brazos River. The campground includes RV hook-ups, furnished cabins, day camping, and tent camping.

Editor’s Note: Originally, this story erroneously indicated the Cafe was on the Bankhead Highway. Going east from Weatherford, the Bankhead Highway runs slightly northwest to Mineral Wells, then to Palo Pinto and on west. The Bankhead was established in 1916 with a route from Washington.D.C. to San Diego, California. In contrast, U.S. Route 80 was established in 1914 and ran from San Diego, California, to Savannah, Georgia. Although there were many miles within Texas where the Bankhead was the same as Route 80, this is not the case for this stretch of road. In 1991, the U.S. 80 designation was eliminated west of Dallas and this section of the old route became part of the frontage road network for Interstate 20.